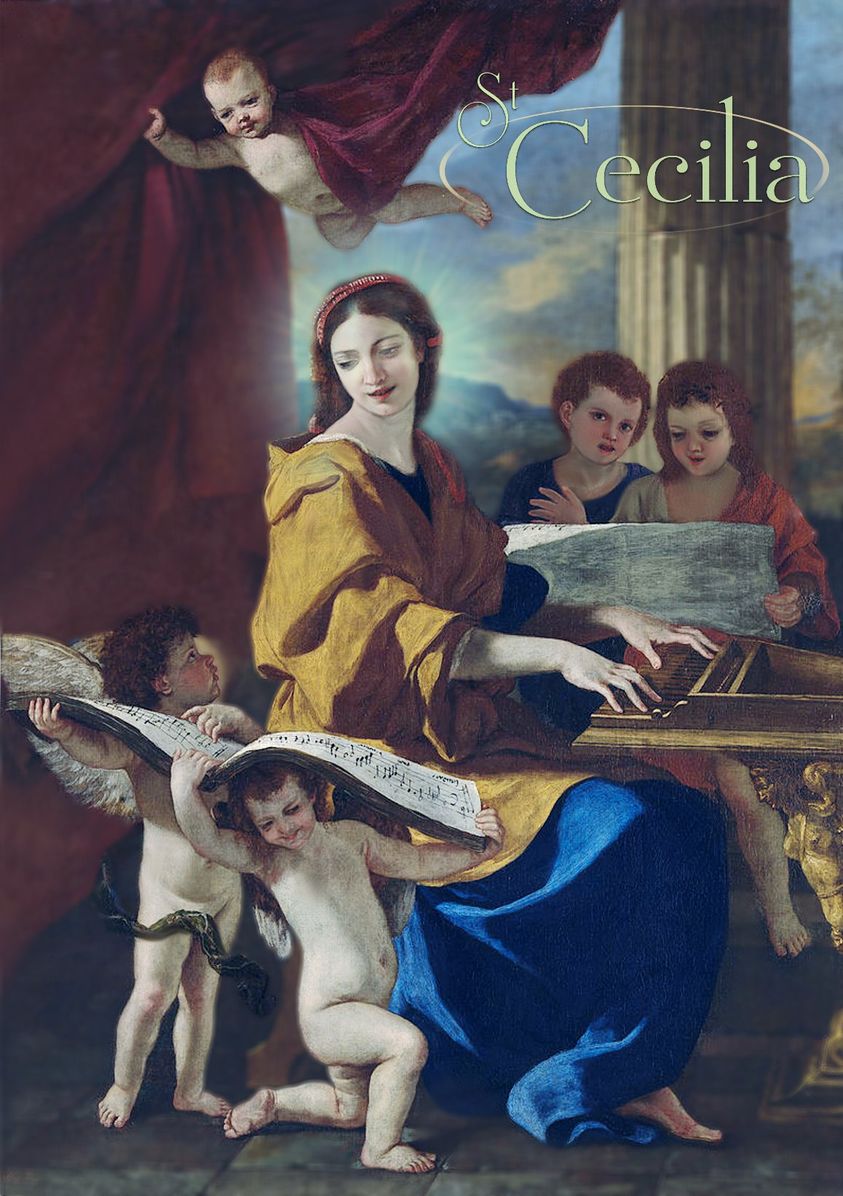 Cecilia is one of the most popular of Roman saints. The year of her birth is unknown, but it is believed she died about 177 A.D. in Rome. Her body was discovered incorrupt in 1599, is known to be the first Saint to be incorrupt. Saint Cecilia is the first Saint whose body experienced the phenomenon of incorruption.

Legends say that she was the daughter of patrician Roman Christians, who gave her in marriage to a young nobleman named Valerian of Trastevere, despite her desire te remain a virgin. The day on which the wedding was to be held arrived and while musical instruments were playing she was singing in her heart to God alone saying: "Make my heart and my body pure that I may not be confounded".

When, after the celebration of the marriage, the couple had retired to the wedding-chamber, Cecilia told Valerian that she was betrothed to an angel who jealously guarded her body; therefore Valerian must take care not to violate her virginity. He said, "Dearest, if this be true, show me the angel". And Cecilia said: "If you believe in the living and one true God and receive the water of baptism, then you shall see the angel." Valerian agreed and was baptized. When he returned, he saw Cecilia praying in her chamber, and an angel by her with flaming wings, holding two crowns of roses and lilies, which he placed on their heads, and then vanished. The brother of Valerian, Tiburtius, was also converted; and after being baptized he too experienced many marvels.

The two brothers, who were very wealthy, began to aid the families which had lost their support through the martyrdom of the fathers, spouses, and sons; they saw to the burial of the Christians, and continually braved the same fate as these victims. In that time in Rome it was very dangerous to be a Christian. They were arrested and brought before the prefect Almachius, and when they refused to sacrifice to the gods were executed with the sword. Cecilia buried them at her villa on the Apprian Way and was arrested for the action. Despite the fact that the Roman prefect attempted to persuade her toward more “politically correct” behavior, Cecilia refused to submit. After a failed attempt to suffocate her in a heated bath in her own home, an executioner was sent to behead her.

Sentenced to be suffocated in her own bathroom, Cecilia survived. Three attempts to behead her mortally wounded but failed to kill her immediately. Over the next three days, she lay in pain, singing songs of praise to god, and comforting herself with sacred music, as her friends came to seek her final blessings. Finally, she died, three days after the sword failed to behead her, never once forsaking her faith in Christ. Her grave was discovered in 817, and her body removed to the church of Saint Cecilia in Rome; the tomb was opened and her body was discovered incorrupt in 1599, is known to be the first saint to be incorrupt.

Patron Saint: of Church Music and of the blind. 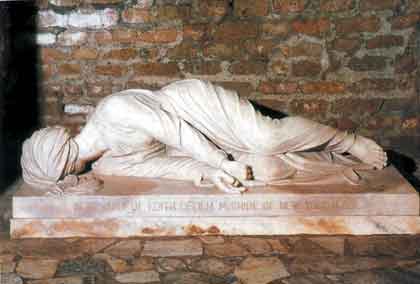 O Eternal God, Who gave us, in the person of St. Cecilia, a powerful protectress, grant that after having faithfully passed our days, like herself, in innocence and holiness, we may one day attain the land of beatitude, where in concert with her, we may praise You and bless You forevermore in eternity.
Amen.

Beloved Jesus, Saint Cecilia's parents wed her to a pagan nobleman. Eager to convert her new husband, she told him about the angel that always escorted her. He wanted to see the angel, too, so he asked for his soul to be purified by baptism. The next time Saint Cecilia prayed, her husband saw the angel place a crown on both of their heads. I ask her and my guardian angel to pray for the unconverted spouses in my family and circles of friends, and for the spouses who believe in You but are slow in spiritual growth. Lord, in Your perfect timing, help them to open up to Your friendship and purification. Saint Cecilia, pray for us.
Amen.

St. Cecilia, glorious Virgin and Martyr of Jesus Christ, I admire the courage with which you professed your faith in the face of severe persecution, and the generous love with which you offered your life in withness to your belief in the Blessed Trinity. I thank God with you for the wonderful graces He had bestowed upon you to make your life holy and pleasing to Him even in the midst of the wealth that was yours. I thank Him for the privilege offered to you of receiving the glorious crown of martyrdom.

Saint Cecilia, I also admire the purity of love that bound you to the Savior, which was greater in your eyes than any human affection, so that you declared yourself before the enemies of the Church, "I am the bride of my Lord Jesus Christ." Pray for me that in imitation of you I may keep my body pure and my soul holy, and that I may love Jesus with all my heart.

In these times so full of pleasure seeking and so lacking in faith, teach us to profess our faith courageously and to be willing to sacrifice ourselves in practicing it, so that our good example may lead others closer to Christ and the Church He has founded.

In thanksgiving to God for the graces He bestowed on St Cecilia: Our Father. Hail Mary. Glory be. St. Cecilia, Virgin and Martyr of Jesus Christ, pray for us.
Amen.

Content composed with the instant Online HTML editor. Please purchase a HTMLg license to remove the promotional messages from the edited documents.