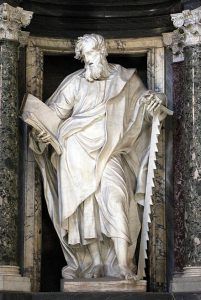 Simon the Zealot was the eleventh Apostle of Jesus and was chosen by Simon Peter. Simon is nicknamed 'Zealot' or 'Zealot' in the Gospels. He belonged to the political group among the Jews who wanted the Romans to leave the country by force if necessary.

Simon Zelotes, the eleventh apostle, had been chosen by Simon Peter. He was a capable man of good origin and lived with his family in Capernaum. He was twenty-eight years old when he joined the apostles

This one served to distinguish him from the other apostle named Simon, namely Simon Peter.

Legend has it that after Jesus' ascension to heaven, Simon first went to Egypt to preach the gospel there. Then he traveled with Judas Taddeus (not the traitor!) To Persia. There they baptized more than 60,000 people, not counting the children. There was also a king among the baptized. He continued to work in this way until he grew old and weak. And he died and was buried in the heart of Africa.