Feast of the Visitation of the Blessed Virgin Mary

The Visitation is the visit of Mary to Elizabeth as recorded in the Gospel of Luke, Luke 1:39–56. It is also the name of a Christian feast day commemorating this visit, celebrated on 31 May in the West (2 July in calendars of the 1263–1969 period, and in the modern regional calendar of Germany) and 30 March among Eastern Christians.

Mary visits her relative Elizabeth; they are both pregnant: Mary with Jesus, and Elizabeth with John the Baptist. Mary left Nazareth immediately after the Annunciation and went "into the hill country...into a city of Judah" (Luke 1:39) to attend to her cousin (Luke 1:36) Elizabeth. There are several possibilities as to exactly which city this was, including Hebron, south of Jerusalem, and Ein Karem. The journey from Nazareth to Hebron is about 130 kilometres (81 mi) in a direct line, probably up to half as far again by road, depending on the route taken. Elizabeth was in the sixth month before Mary came (Luke 1:36). Mary stayed three months, and most scholars hold she stayed for the birth of John. Given the prevailing cultural traditions and needs for security etc., it is probable that Joseph accompanied Mary to Judah then returned to Nazareth, and came again after three months to take his wife home. The apparition of the angel, mentioned in Matthew 1:19–25, may have taken place then to end the tormenting doubts of Joseph regarding Mary's maternity.

In the Gospel of Luke, the author's accounts of the Annunciation and Visitation are constructed using eight points of literary parallelism to compare Mary to the Ark of the Covenant.

In Catholicism, it is held that the purpose of this visit was to bring divine grace to both Elizabeth and her unborn child. Even though he was still in his mother's womb, John became aware of the presence of Christ, and leapt for joy as he was cleansed from original sin and filled with divine grace. Elizabeth also responded and recognised the presence of Jesus, and thus Mary exercised her function as mediatrix between God and man for the first time. 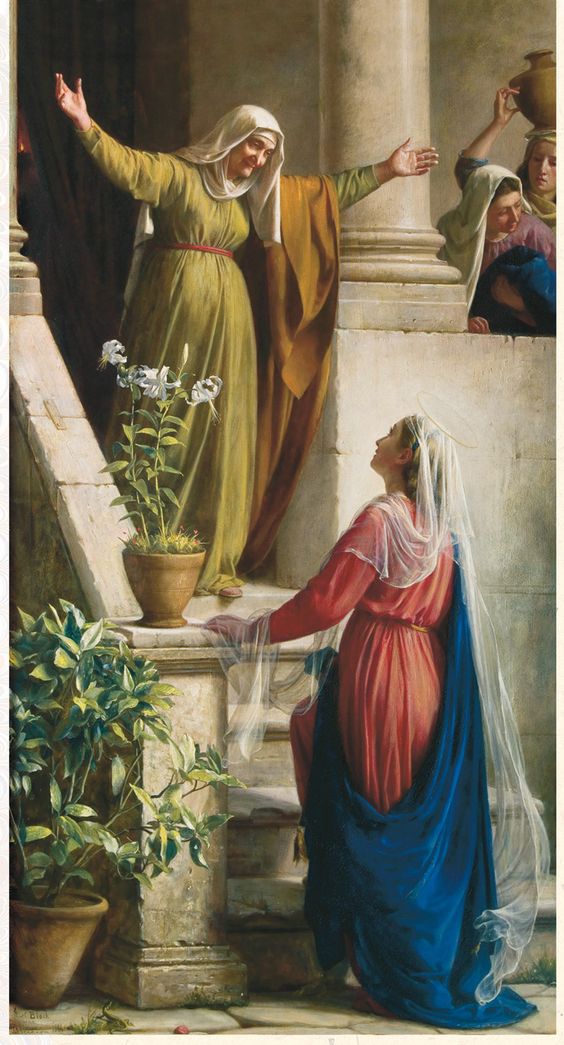 And she [Elizabeth] spoke out with a loud voice, and said, Blessed [art] thou among women, and blessed [is] the fruit of thy womb. And whence [is] this to me, that the mother of my Lord should come to me? For, lo, as soon as the voice of thy salutation sounded in mine ears, the babe leaped in my womb for joy. And blessed [is] she that believed: for there shall be a performance of those things which were told her from the Lord. (Luke 1:42–45)

In response to Elizabeth, Mary proclaims the Magnificat (My soul doth magnify the Lord), Luke 1:46–55.

The word "blessed" is rendered in Greek, not by the word "makarios", but as "evlogimeni", which is the feminine second person singular, used only this once in the New Testament. Its masculine third person singular counterpart "evlogimenos" is used only for Jesus and only on this occasion and when He was welcomed into Jerusalem on Palm Sunday with: "Blessed is he who comes in the name of the Lord". The masculine/mixed gender third person plural "evlogimenoi" is used by Jesus only when referring to the righteous who are to be raised to life in the Last Judgement.

The theme of the Feast of the Visitation centers on Mary responding to the prompting of the Holy Spirit to set out on a mission of charity.

This feast is of medieval origin. It was kept by the Order of Friars Minor before 1263 when Saint Bonaventure recommended it and the Franciscan chapter adopted it, and the Franciscan Breviary spread it to many churches. In 1389 Pope Urban VI, hoping thereby to obtain an end to the Great Western Schism, inserted it in the Roman Calendar, for celebration on 2 July. In the Tridentine Calendar, it was a Double. When that Missal of Pope Pius V was replaced by that of Pope Clement VIII in 1604, the Visitation became a Double of the Second Class, or, as it would be called from 1960 by Pope John XXIII's reform, a Second-Class Feast. It continued to be assigned to 2 July, the day after the end of the octave following the feast of the birth of John the Baptist, who was still in his mother's womb at the time of the Visitation.

The 1969 revision of the calendar moved it to 31 May, "between the Solemnity of the Annunciation of the Lord (25 March) and that of the Nativity of St. John the Baptist (24 June), so that it would harmonize better with the Gospel story."

The Catholic Church in Germany (together with the Lutheran church) has, with the consent of the Holy See, kept the 2 July date as a national variation of the General Roman Calendar. July 2 is observed also by Traditionalist Catholics who use a pre-1970 calendar, and by Anglicans who use the 1662 Book of Common Prayer (in some Anglican traditions it is merely a commemoration rather than a feast day).

In the Roman Rite of the Catholic Church, the Visitation is the second Joyful Mystery of the Rosary.

The celebration of a feast day commemorating this event in the Eastern Orthodox Church is of relatively recent origin, dating only to the 19th century. The impetus to establish a feast day in the Liturgical calendar of the Orthodox Church, and the composition of a service to be included in the Menaion, were the work of Archimandrite Antonin Kapustin (1817–1894), head of the Russian Orthodox Ecclesiastical Mission in Jerusalem. The Gorneye Convent in Jerusalem, which was built on the traditional site of the Meeting of the Theotokos (Virgin Mary) and St. Elizabeth, celebrates this Feast on 30 March. (Julian Calendar 30 March corresponds, until 2099, to Gregorian Calendar 12 April.) If 30 March falls between Lazarus Saturday and Pascha (Easter), the Visitation Feast is transferred to Bright Friday. Celebration of the Feast of the Visitation has not yet been accepted by all Orthodox jurisdictions.

In Syriac Christianity the feast of the Visitation is celebrated on the third Sunday in the Season of Announcements prior to Christmas. 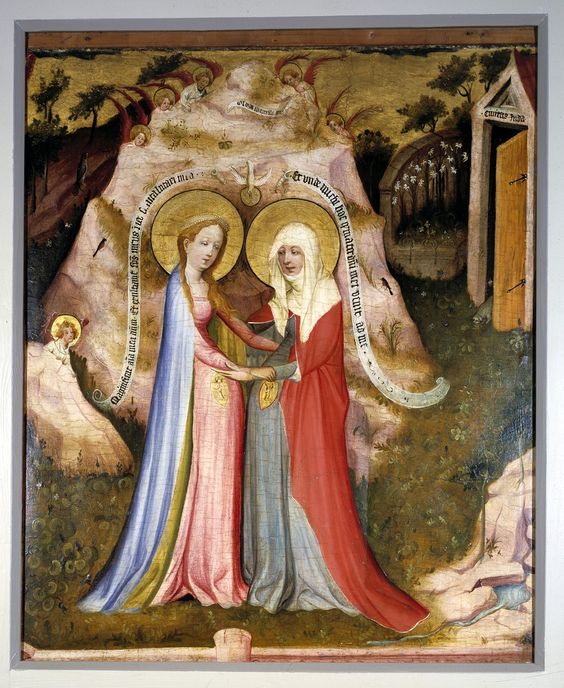