Our Lady of La Vang

The Saint of Vietnam

In 1552, the Le family, ruling dynasty of Vietnam was manipulated by its chief Regent, Mac Dang Dung. It took combined efforts of two political elite families to oust the usurper. As rewards, Vietnam was divided into two regions under the ruling families Trinh and Nguyen. The Trinh family ruled the northern region. The southern region was under the Le and Nguyen families. Several years later, wars broke out between the Trinh and Nguyen families. The Nguyen Lord set up the capital in a remote location called Dinh Cat, distant from the feuds. The Nguyen opened their domain to foreign merchant ships in exchange for guns and ammunitions against their northern adversaries. In 1593, Catholics was introduced into Vietnam by Father Diego Aduarte, a Dominican, who came onboard a Spanish merchant ship. He established a mission in Dinh Cat.

Years later, Father Francisco Buzoni, a Jesuit, maintained his predecessor's mission through good relations with the Nguyen family. With the arrival of Father Francisco de Pina, an Italian Jesuit who was fluent in Vietnamese language, many people converted to Catholicism, including the king’s aunt. Thirty-seven parishes were established around Dinh Cat, near the coastal line of Vietnam as the Jesuits continued the Dominican works. In 1624, Father Alexander de Rhodes, a French Jesuit, arrived and initiated the Vietnamese alphabets that are being used today. For more than forty years, Catholicism was marginally tolerated to flourish due to the opened relations with European powers, such as Spain, France and Portugal. In 1788, the Nguyen dynasty expanded their territory southward and re-united the north and south regions into what is now Vietnam. The capital was moved once again, sixty kilometers southward, to Hue, and became the official capital of Vietnam in 1789.

The persecution of Catholicism dated back in 1640, when the Nguyen lords grew dissent of the Spanish merchants and killed two missionaries. In 1645, Father Alexander de Rhodes was extricated out of Vietnam after a number of parishioners in the Dinh Cat area were killed during a skirmish with the local bandits. The periodic persecutions of the Vietnamese Catholics continued and escalated in 1798, when the Nguyen Dynasty decreed Catholicism as a religious sect, introduced by foreigners, with the purposes to recruit and influence the working class to revolt against the Nguyen dynasty. A few months later, direct attacks were aimed at all thirty-seven parishes in Dinh Cat with the purpose of exterminating the misled commoners and leveling the parishes. More than 100.000 Vietnamese Catholics died as martyrs. 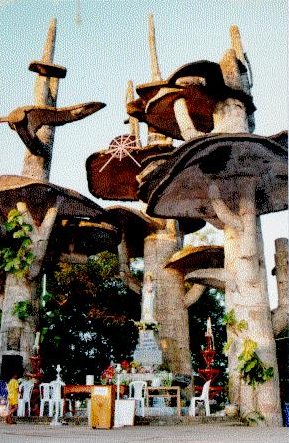 The first apparition of the Lady of La Vang to the Vietnamese people was noted during this great persecution in 1798. This was the year, when King Canh 'Minh issued an anti-Catholic edit and an order to destroy all Catholic churches and seminaries. Many Christians took refuge in the jungle situated in proximity of Quang Tri, a village in central Vietnam, where they experienced hunger and sickness, and prepared themselves for martyrdom. Many Catholics from the nearby town of Quang Tri sought refuge in the deep forest of La Vang. A great number of these people suffered from the bitter cold weather, lurking wild beasts, jungle sickness and starvation. At night, they often gathered in small groups to say the rosary and to pray. Unexpectedly, one night they were visited by an apparition of a beautiful Lady in a long cape, holding a child in her arms, with two angels at her sides. The people recognized the Lady as Our Blessed Mother. Our Blessed Mother comforted them and told them to boil the leaves from the surrounding trees to use as medicine. She also told them that from that day on, all those who came to this place to pray, would get their prayers heard and answered. This took place on the grass area near the big ancient banyan tree where the refugees were praying. All those who were present witnessed this miracle.

From the time the Lady of La Vang first appeared, the people who took refuge there erected a small and desolate chapel in her honour. During the following years, her name was spread among the people in the region to other places. Despite its isolated location in the high mountains, groups of people continued to find ways to penetrate the deep and dangerous jungle to pray to the Lady of La Vang. Gradually, the pilgrims that came with axes, spears, canes and drums to scare away wild animals were replaced by those holding flying flags, flowers and rosaries. New pilgrimages went on every year despite the continuous persecution campaign. After the persecution had officially ended, Bishop Gaspar ordered a church to be built in honour of the Lady of La Vang. Because of its precarious location and limited funding, it took 15 years for the completion of the church of La Vang. It was inaugurated by Bishop Gaspar in a solemn ceremony that participated by over 12.000 people and lasted from August 6 till 8, 1901. The bishop proclaimed the Lady of La Vang as the Protectorate of the Catholics. In 1928 a larger church was built to accommodate the increasing number of pilgrims. This church was destroyed in the summer of 1972 during the Vietnam War.

Our Lady of La Vang continues to be an inspiration for those who suffer for their faith, and she continues to invite people to pray and make sacrifices for the love of their Faith. We are all encouraged to come to Mary, that she might draw us to her Immaculate Heart, and encourage us in our times of suffering to be united to the sufferings of Christ her Divine Son. Our Lady of La Vang, pray for us. The Holy Father recently said, "In visiting the shrine of Our Lady of La Vang, who is so loved by the Vietnamese faithful, pilgrims come to entrust to her their joys and sorrows, their hopes and sufferings. In this way, they call on God and become intercessors for their families and nation, asking the Lord to infuse in the heart of all people feelings of peace, fraternity and solidarity, so that all the Vietnamese will be more united every day in the construction of a world based on essential spiritual and moral values, where each one will be recognized because of his dignity as a son of God, and be able go in freedom and as a son toward the Father of Heaven, 'rich in mercy' ".

In the current communist country of Vietnam, Catholicism is a minority religion and like all the other religions is under strict government control. A slight improvement in relations between Vietnam and the Vatican has not as yet led to the establishment of diplomatic relations. The relations between the Vatican and communist Vietnam suffered a setback recently with the appointment of Archbishop Jean-Baptist Pham Minh Man as Cardinal of Ho Chi Minh City. On September 28, 2003 Pope John Paul II appointed 31 Cardinals, which included Jean-Baptiste Pham Minh Man. The regime in Hanoi is vehemently opposed to his appointment and refuses to accept the appointment of Pham Minh Man. An official of the government commission on religions stated that the Vatican, without consulting communist Vietnam, has infringed on an agreement with the Vietnamese government. Years of bickering took place between Vietnam and the Vatican prior to the appointment of Jean-Baptiste Pham Minh Man (69) as Archbishop of Ho Chi Minh City in 1998.

Prayer to Our Lady of La Vang

Mother Mary, Our Lady, present us to Jesus, Our Saviour.
Mother Mary, lead all souls to Jesus, our Dear Lord who alone redeems and saves.
Dear Jesus, free us from the bondage of sin and govern us with Your Love.
Amen