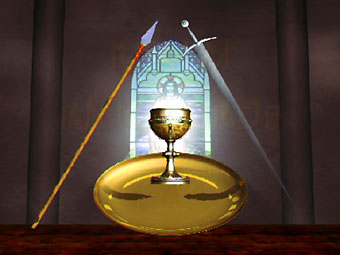 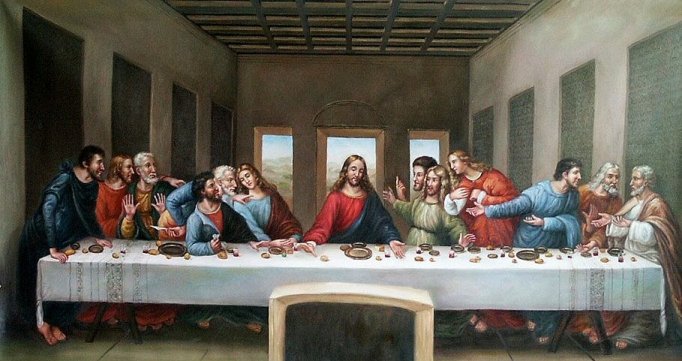 The Holy Grail is generally considered to be the cup from which Christ drank at the Last Supper and the one used by Joseph of Arimathea to catch Christ's blood while interring Him and then took the object to Britain where he founded a line of guardians to keep it safe. The term "Grail" itself is believed to originate from the Latin 'gradale' meaning a dish used during a meal.

According to the tradition, the Chalice of the Last Supper was taken by St. Peter to Rome and became the Chalice of the Popes. That's why the Roman Canon for the Holy Mass refers to "hunc praclarum calicem", "this venerable Chalice" and not, as the original Canon, to "the Chalice". In 258 AD, during a persecution of the Christian and the confiscation of the treasures of the Church, after the killing of Pope Sixtus II, the young Spanish deacon managed to sent this precious relic to his parents home in Huesca/Spain for safeguarding. Three days later, he was tortured by the Emperor Valerian and died on an iron grill.

The Holy Chalice ("Grial" means "mortar-shaped chalice" in Old Spanish) was venerated in Huesca until the Muslim Moors invaded the country in 713 AD. The Chalice was hidden in a mountain cave in the Pyrenees, transferred to several Churches and eventually brought to the fortified monastery of San Juan de la Pena high above the Camino, the pilgrim path to Santiago de Compostela.

During the Spanish reconquista, the war against the Moors, the Christian king Alfonso II ordered the troubadour Guiot de Provins to write the first "Story of the Holy Grail". By putting it into an Arthurian context, Guiots mission was to inspirethe Christian knights to follow the example of the greatest knights of all times and go on a "Quest for the Holy Grail" and serve in the Spanish Wars. The Pope assured them the same blessings as the knights who head for the Holy Land and declared the reconquista officially a crusade.

In 1399, king Martin el humano ordered the transfer of the precious relic, which became a national symbol, to his royal palace in Zaragoza. Since 1437, the Chalice of the Last Supper of Our Lord Jesus Christ, the legendary "Holy Grail", is venerated in the Cathedral of Valencia, Spain.

In 1959 its veneration was officially recognized as an authentic relic by Blessed Pope John XXIII. On November 8, 1982, Pope John Paul II, on his visit to Spain, venerated the Holy Chalice and celebrating Holy Mass with it, again confirming its authenticity.

The Santo Caliz , as it is called in Spain, consists of three parts: The original chalice, a cup of thin, translucent Agate (its pattern gives it the appearance of flames under direct light), identified by archaeologists and art historians as a Syrian work of the 2nd/1st century BC (being of hellenistic style); a elliptical cup of chalcedony, bearing a strange inscription, most probably original patena, the vessel for the bread of the Last Supper, and, an addition of the 12th century, the golden construction which holds both vessels together and gives it the shape of a chalice (when, actually, during the time of Christ indeed cups were used for the wine), set with 28 pearls (one missing), two balaxes and two emeralds. The whole vessel is 17 cm or 7 inches in height.

This is a precise and very detailed REPLICA of the Holy Grail in a 60 % format, being 10 cm or 4 inches in height, officially released in a limited number by the Canons of the Cathedral of Valencia. Although it is of course NOT of stone and gold, it is a very detailed copy and, e.g., every little "pearl" is hand-fixed. Since it was touched to the original, it is a 2nd class relic and indeed a spiritual treasure, symbolizing the original gift of the Blessed Sacrament, the Holy Eucharist, in the night of the Last Supper in the Upper Room on Mount Zion in Jerusalem. 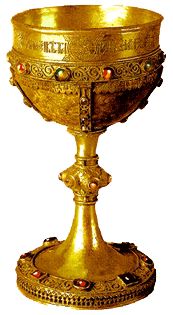