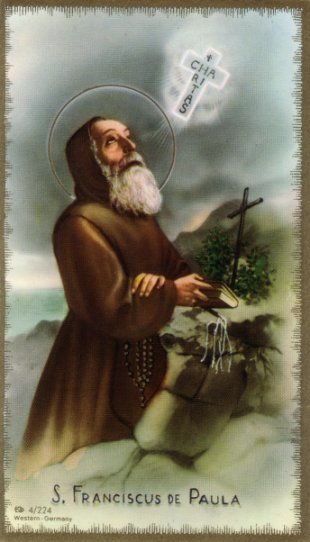 Francis of Paola was born March 27, 1416 at Paola, a small city near the Tyrrhenian Sea, in Calabria, the midway from Naples to Reggio (Italy). His parents, Giacomo and Vienna d'Alessio, were remarkable for the holiness of their lives. Remaining childless for some years after their marriage they had recourse to prayer, especially commending themselves to the intercession of Saint Francis of Assisi. Three children were eventually born to them, eldest of whom was Francis.

At the age of fifteen, Saint Francis left his poor home at Paola, to live as a hermit in a cave on the seacoast. When he was 19, two other men joined him. Francis was especially influenced by his patron saint, Francis of Assisi. In 1436, he and two companions founded the Order of the “Minims”, which means the Least. The Minims is a severely ascetic Roman Catholic order, that does charitable work and refrains from eating meat, eggs, or dairy products.

The people of Paola built a church and monastery for him and his followers, where he had led his eremitical life some fifteen years later and set a Rule for his followers emphasizing penance, charity, and humility, and added to the three monastic vows, one of fasting and abstinence from meat; he also wrote a rule for tertiaries and nuns.

As the order grew in size, its founder's reputation increased as a holy man, a defender of the poor and the oppressed, and a worker of miracles. In 1474, Pope Sixtus IV officially approved the new order and named it the Franciscan Minim Friars.

King Louis XI of France had not lived a very good life. He called for St. Francis when he was dying. Just the thought of dying made the king terrified. He wanted Francis to work a miracle to cur him. Instead, the saint gently helped the frightened man to prepare well to die a holy death. The king had a change of heart. He accepted God's will and died quietly in the arms of the saint.

He died on Good Friday, 2 April 1507 at Plessis, France, when he was ninety-one years old. During his live he healed hundreds with a word or the leaf of an herb. He spent the last three months of his life alone preparing to appear before Jesus, since he knew when he was going to die.

He was canonized in 1519, by Pope Julius II, twelve years after his death. In 1562 Huguenots broke open his tomb, found his body incorrupt, and burned it. The bones were salvaged by Catholics, and distributed as relics to various churches. 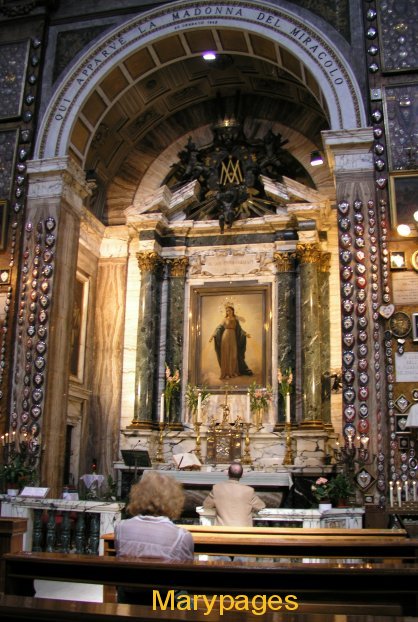