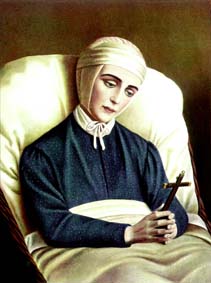 From a long time, she was thought to be called: "Emmerich”; her real name is: “Emmerick”

Anne Catherine Emmerick was born on the 8th of September 1774 in the diocese of Münster in community near Flamschen near Dülmen in Germany. This day is celebrated in the Catholic Church as the birthday of Our Blessed Lady. She was the daughter of Bernard Emmerick and Anna Hillers, a poor and devote farming couple. She was the fifth child in a family of nine children. She had visions from early childhood fairly constantly. When she was baptized, she saw her patron saints, Anne and Catherine, who both bent forward and blessed her. The child Jesus was also there and permitted her to see a wedding ring. She also regularly was her guardian Angel in the spirit, who was always with her to protect her. She could also mystically see her guardian angel and ask him questions in her childish innocence. This contact remained until her death on the 9th of February 1824. She was also able to mystically see Mary and other Saints. Besides she was able to hold mystical conversations with them. Once she started to talk of these happenings locally, she discovered that people did not always understand, what she experienced and thus she became silent.

For a while she looked after a herd of cows. Through this she was close to nature with the animals and she learnt working of poisonous and healing herbs. She did not have an easy life as a farmer’s daughter, but chose simplicity that did not make her life any easier. At sixteen years of age, she woke up to her desire to enter a convent. But she was poor and had to wait a further twelve years to enter. She seldom spoke and was very withdrawn in herself, but showed sensitivity for the sufferings of others and often asked God to let her suffer. She was also very stubborn and highly-strung. She had weak and sickly health. By touching the remains of deceased Saints, she received lots of information and had close contact with many dead souls in Limbo. At the age of 24 she had a very important experience. In front of the Tabernacle, whilst in prayer by the crucifix, she saw Jesus appear to her from the tabernacle as a young glowing gentleman. In His left hand He held a wreath of flowers and in His right hand He held a crown of thorns and asked which she would prefer. Eventually she chose the crown of thorns. When she had recovered her normal feelings, she felt a great deal of pain around her head. Drops of blood that later started to appear on her head had to be covered with a hair band.

Having been accepted as a novice on November 13, 1802, Anne Catherine entered the Augustinian convent, belonging to Augustine Nuns, at Agnetenberg in Dülmen on the 18th of December 1802. As was to be expected in this small convent community, her fellow nuns quickly discovered her mission. Some talked about her behind her back, as they were jealous and proud. She was clairvoyant, in feeling and sound, Anne was able to experience this gossip and under went it as if she was being hit by sharp arrow in her face. She did not show this, but her fellow nuns knew of her pity for them, which she received for them and they got a horrible feeling. Immediately prior to entering the convent, she felt very ill with pains around her heart. This pain stayed with her for the rest of her life. In 1812 during an ecstasy in the area of her heart, close to her sternum a cross was left behind. She was very ill in the convent, but it was not due to her own constitution but much more that she could suffer for other people who normally did not know that they were suffering. In fact, she adopted others suffering. Later on, when praying about and concentrating on the sufferings of Christ, she felt a burning pain in her hands and feet. 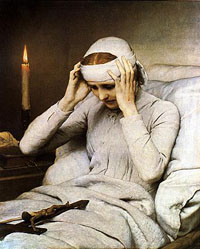 On the 29th of December 1811, at three p.m, the crucified Lord Jesus appeared to her with gleaming wounds, which penetrated her hands, feet and side like burning arrows that started to bleed. From that day forth, she never left her bed and had no need of food, drink or anything else. She was able to hide this for than three months, as she only bled on a Friday. Her earlier stigma, the crown of thorns also commenced bleeding whereas this had never occurred before. From the year 1812 until her death, she bore the stigmata of Our Lord, head, right side, both hands and her feet. The feet are one wound as one nail pierced both feet. This stigmatism was kept secret from the world until 1813, but the convent was dissolved in 1812. She went to live with a friendly Priest at the home of a poor widow in Dülmen, each in a separate room. There she became part of a positive human community with which she had bonds in mainly positive, but also negative ways. For example some Jesuits were part of this group.

Anne wanted her visions to be noted, so that they would not be lost without being written down. On Thursday the 24th of September 1818 Clemens Brentano, the celebrated poet and writer, a Catholic, came to visit her. She immediately recognized him as the person in answer to her prayers. She told him: “I know you before you came to me. That is why, when I first saw you coming into my room, I thought: "There he is". Brentano was deeply moved by her personality and came to her bedside everyday for five years to write down her visions. He was spoilt by the big salons in Berlin, chose to bury himself in the farming town of Dülmen. He always showed Anne what he had written and asked her to read it and tell him if he had noted all correctly. She saw it all gleaming with a bright light. Thus did she know that it all was true? Brentano wrote all of it down for her in a book: “The Sad Sufferings of Our Lord Jesus Christ”, which was published in 1833. Ten years after Anne Catherine Emmerick’ death.

A person such as Anne Catherine Emmerick is able to explain the immediate past and the distant past exactly in detail. People, dates, places and events. This going hand in hand with an exact personal, extraordinary vision of faith. Confirmed years later by, documentation, research, science, expeditions, bible exegesis and theology. Thanks to the visions of Anne Catherine Emmerick, the home of the Virgin Mary and John were discovered on a hill near the Turkish Ephesus. Since then it has been an important place of pilgrimage for Christians and Moslems. At the beginning of 1800, she received many personal “revelations” about the sufferings of Jesus. She "saw" Jesus’ last days pass before her like a film. This movie: "The Passion of the Christ", of director Mel Gibson, is based on the four evangelical gospels (Matthew, Mark, Luke and John) and on one other account. The other material comes from a book sometimes referred to as the fifth Gospel: "The Dolorous Passion of Our Lord Jesus Christ", which book is an account of the visions of the passion and crucifixion experienced by Anne Catherine Emmerick.

Anne Catherine is simple and uncomplicated. People are under the impression, that it is impossible to tell all this without having seen it and lived through it. Anne Catherine Emmerick said about her visions: “Never have I believed the visions other than those in the Catholic catechism; not visions, but only the teachings of our religion only lead my spiritual life.” You would be surprised at the detail visions. Such has physical facts, up to and including the way she describes the interior of the Cenacle (the room where the Last Supper was held and Whitsunday), the form of the cross and the type of wood the cross was made from and the nails, which were used, is described in detail. Not only physically visible facts are detailed, but also the order in which they occur. It is very moving the way in which Anne describes the state of Mary Magdalena as she dried Jesus feet with her hair. The Roman Catholic Church leaves us free to value these visions. A Church and a State examination have been made of the situation during Anne Catherine’s life. They were unable to discover anything that contradicts the teachings of the Church.

A prophecy of Anne Catherine Emmerick: 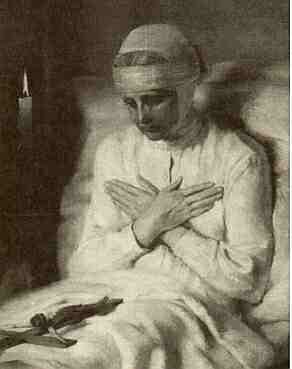 Some of Anne Catherine's Emmericks visions:
I saw:

Anne Catherine Emmerick died on the 9th of February 1824 in Dülmen at the age of 49. She was buried in the catholic graveyard behind the Holy Cross-church in Dülmen. Because about 50.000 pilgrims took sand away from the grave between 1877 and 1910, a Polish Duchess had an iron fence put around it. In 1891, 67 years after her death a study was started in preparation of her being declared Blessed. This process was stopped in 1927; more time was needed to prove the legitimism of the documents, which Brentano had written down for her. In 1973 a miracle occurred said to be due to intercession to Anne. A nun with a swollen windpipe and lung tuberculosis and asked Anne Catherine to intercede for her and was miraculously cured. The Vatican recognized this miracle, because of which the process for her to be declared blessed was reopened in 1973. In 1975 her human remains were dug up and reburied in the cellar grave in the Holy Cross Church in Dülmen. The process required to proclaim her blessed was concluded in 2004. Our pope John Paul II beatified Anne Catherine Emmerick in Rome on the 3rd of October 2004. Bishop Reinhard Lettermann said: “The declaration of Blessedness of a mystic from Münster filled all with great joy and thanks".

A book has been published: "The Life of Catherine Emmerick", written by Parson Carl E. Schmoeger, published in 1870 and later republished in 1968 by Maria Regina Guild, L.A California. If you wish to visit the memorial place for Anne Catherine Emmerick, you can visit the Parish: “Our Lady Queen”, Anna-Katharina-Emmerick-Straße 28 in Dülmen. This only by appointment made with the parish council, telephone number: 0049-2594/9510. The grave is to be found in the Holy Cross Church, Kreuzkirche 10 in Dülmen. It is open from 8 a.m until 6 p.m via the tower. 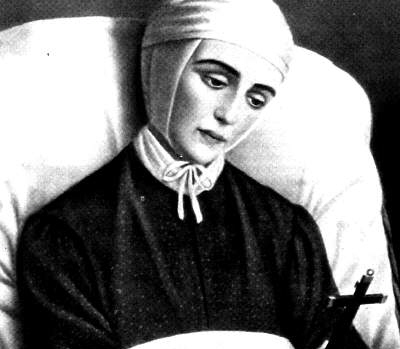 Beloved Savior, crucified Love! In the goodness of Thy Most Sacred Heart we pray Thee, honor on earth Thy wound-adored bride.
Thou Thyself hast said, "Whosoever exalted himself shall be humbled and whosoever humbles himself shall be exalted."
In Thy Most Holy Name we pray Thee, raise her up soon from her oblivion!
God, Holy Ghost, dispense of all graces, who through Thy servant during her life on earth did bestow upon suffering mankind so many helps for both body and soul,
let her who is now in the blessed joy of heaven become a helper in need for all mankind forever, that we may call upon her with confidence in our sufferings and spiritual needs!
Amen.