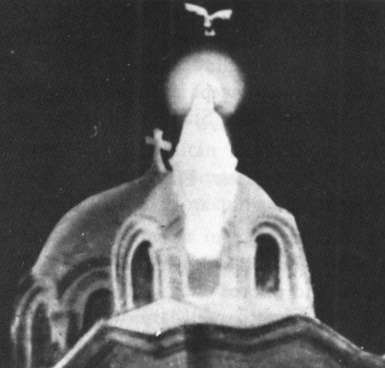 The Church of Virgin Mary in Zeitoun was built in 1924 and consecrated by Athanasious, bishop of Beni Suef, in 1925. It does not, consequently, fall into the category of buildings more than 100 years old and protected by law. Owing, however, to its fine architecture and its being the site of an acclaimed miracle, it has become a popular attraction for pilgrims. People from all walks of life visit the church day and night, the church fathers say, so restoration was considered appropriate and, indeed, necessary. A great deal of time and effort has gone into its restoration, which has been going on since January 2000.

Our Lady appeared in Zeitoun hovering above Saint Mark's Coptic Church, a shrine dedicated to the Holy family, which according to tradition rested in that place during their stay in Egypt. The apparitions, ( hundreds in number ) took place at night, and Our Lady was always surrounded by light.

At 8:30 p.m. on Tuesday 2 April 1968, an hour and a half after sunset, the mechanics and drivers of the garage were all alarmed by some disturbance in the street. The workmen ran to the street. They saw a young lady dressed in white on the church dome. They saw her walking on the dome. They thought that she was about to throw herself down. So they cried: "Be careful. Take care, you may fall down, wait." As the dome is curved, no human being can walk on it. Then some of the pedestrians who stood to watch the scene cried "Virgin Mary, Virgin Mary." As the garage workmen who were watching the apparition were all Moslems, they looked on keenly and they all became extremely astonished. The lady who appeared in a luminous body, moved on the dome and bowed and knelt before the cross..! The Traffic in Tumanbay Street was stopped and a big crowd of people stood to watch the apparition. The workmen of the garage who were on duty at that particular time all gave reports that ascertained and confirmed their witness as they all gave the same particulars. As did Father Costantin, the priest of the church. The first man who saw her, Muslim, Farouk Mohammed Atwa, was undergoing operations for a case of gangrene. The following day when he went to hospital for his scheduled operation, he was certified completely healed. 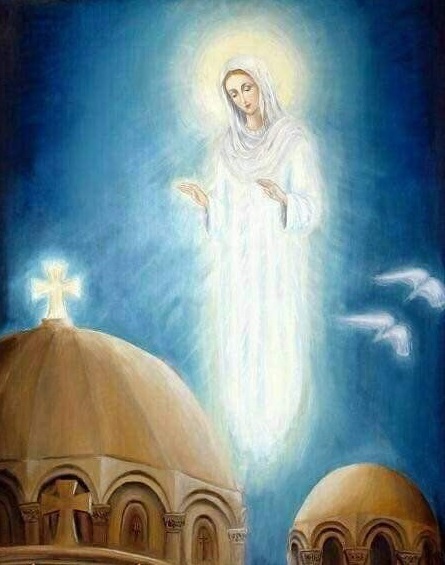 Thus began three years of almost nightly visits by Mary, visits heralded by extraordinary lights and immense clouds of incense. She was seen sometimes vaguely, often quite clearly, smiling, bowing, waving an olive branch, blessing, praying deeply, holding fast or kneeling before the cross of Her Son. These apparitions, often lasting throughout the night, were photographed, televised, witnessed by millions, written about in the international secular and religious press, and seen by both religious and political dignitaries such as Abdul Nasser, president of Egypt and self-proclaimed Marxist.
Spellbound people, often rooted to the ground, prayed the Rosary and sang Christian hymns. Muslims chanted, "Mary, God has chosen Thee....He has chosen Thee above all women", from the Koran. Some saw nothing. Many, many more saw it all, taking in Her radiance hour after hour, watching and praying, going home to rest, and returning--only to find Her still there, watching and praying over them!

His Holiness Pope Kyrillos VI (Cyril VI) entrusted a committee of high rank priests and bishops to investigate the apparitions, and on Saturday, May 4, 1968, the Coptic Orthodox Church officially confirmed the apparitions after thorough investigation (see official report below). His Holiness Pope Kyrillos VI also assigned the responsibility of documenting the apparitions and accompanying miracles to a special committee headed by Anba Gregorios, bishop of postgraduate studies, Coptic culture and scientific research.

The apparitions were also approved by the local Catholic Patriarch, Cardinal Stephanos I (Stephen I), who stated that the apparitions of our Lady at Zeitoun were beyond any doubt and were seen by many of his trustworthy Coptic Catholic children. Father Dr. Henry Ayrout, the rector of the Catholic Collège de la Sainte Famille (Jesuit order) in Cairo also declared his acceptance of the miraculous apparitions of Virgin Mary, saying that whether Catholic or Orthodox, we are all Her children and She loves us all equally and Her apparitions at the Zeitoun Coptic Orthodox Church confirmed this notion. Rev. Dr. Ibrahim Said, head of all Protestant Evangelical Ministries in Egypt at the time of the apparitions, affirmed that the apparitions were true. Catholic nuns from the Sacré-Coeur order also witnessed the apparitions and sent a detailed report to the Vatican. On the evening of Sunday, April 28, 1968, an envoy from the Vatican arrived, saw the apparitions and sent a report to His Holiness Pope Paul VI of Rome. 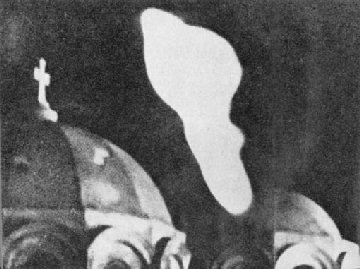 The incident resulted in such widespread press coverage that Pope Shenouda III asked a Coptic businessman to sponsor a massive project to restore and renovate the church, to which he generously agreed. The LE750,000 project included a complete face-lift, restoration of the icons and stencil decorations, the renovation of the wooden doors and the iron bars on the windows and the installation of new electrical and ventilation systems.

The apparitions were approved firstly by the Patriarch of the Coptic Church in Egypt, and later on they received approval by the Roman Catholic Church.
Roman Catholic Cardinal Stephanos did all the investigations and submitted them to Pope Paul VI in May 1968, who approved them as a visitation of the Mother of God.