Our Lady of Ta’ Pinu 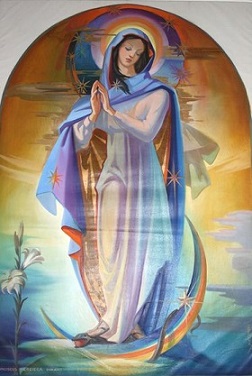 The National Shrine of the Blessed Virgin of Ta' Pinu (Maltese: Santwarju tal-Madonna ta' Pinu) is a Roman Catholic minor basilica and national shrine located some 700 metres (2,300 ft) from the village of Għarb on the island of Gozo, the sister island of Malta. The church is dedicated to the Blessed Virgin of Ta' Pinu. The basilica is located on the edge of a cliff in open countryside which allows visitors to enjoy beautiful views of the area.

The origins of the Shrine of the Blessed Virgin Mary of Ta’ Pinu are lost in the midst of time. The small chapel, known as “Tal-Ġentili”, dedicated to the Assumption of the Blessed Mother of God existed before 1545 when it is recorded to have been rebuilt. In 1587 the church property changed hands and consequently its name, from “Tal-Ġentili” to “Ta’ Pinu”. This happened because Pinu Gauci became the procurator of this church in 1611. He sponsored its restoration and in 1619 commissioned the painting of the Assumption of Our Lady for the main altar, which was accomplished by the Maltese artist Amadeo Perugino.

Pinu Gauci became the procurator of the church in 1598 and its name was changed from "Of the Gentile" to "Ta` Pinu", meaning "Of Philip". In 1611 Gauci offered money for its restoration. It was rebuilt, with a stone altar erected and investments for liturgical services provided. Gauci also commissioned the painting of the Assumption of Our Lady for the main altar. This was done in 1619 by Amadeo Perugino.

In 1883, Karmni Grima was walking past the now run down church and heard a voice asking her to recite three Hail Marys'. Over the following years miracles were attributed to the grace of Our Lady of The Assumption to whom the church was dedicated. The works for the new church began on 30 May 1922, to be consecrated on 31 August 1932. It was built in a neo-romantic style. Inside the church there are 6 mosaics, 76 coloured windows and many ex-voto. The bell tower is 61 metres high.

Pope John Paul II celebrated mass on the parvise of the shrine during his visit to the island of Gozo on 26 May 1990. On 18 April 2010, when visiting Malta, Pope Benedict XVI donated and placed a Golden Rose in front of the devotional image of Our Lady of Ta' Pinu, which was brought over from Gozo to Malta for this special occasion. The Pope invited everybody to "Pray to Her Under the Title Queen of the Family" 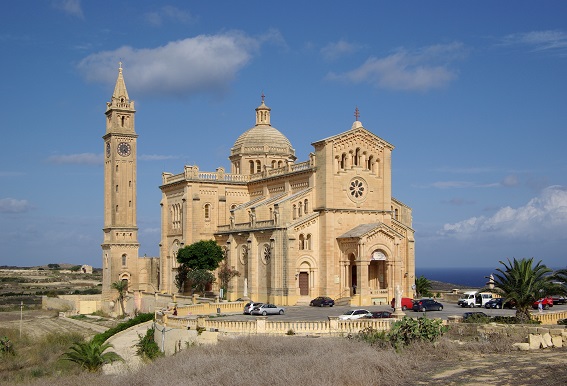 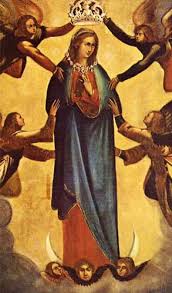 O Blessed Virgin Mary, Queen of the Family, today we have before you in your sanctuary of Ta’ Pinu to entrust our family to your maternal protection. O Mother of Life and Temple of God’s Spirit, in your womb the Son of God took flesh, make out of our family a living sanctuary where life is cherished and respected with love from its very beginning. O Woman of Silence, from this your house continue to spread your invitation towards each and every family so that they would also recollect themselves in silence on order to give heed to your Son. Help us to recognize his voice and listen to it that his words may be the basis on which we build our family. Mother and Teacher of Life we want Christ to be the centre of our family that in it the sentiment of love, forgiveness, mercy and goodness, of docility and patience may thrive and so the peace of Christ will live also within us. O Companion of the Saviour, who walked the way of the Cross, walk with us today and always so that when we come face to face with temptation, with illness, with suffering, and our thoughts become darkened, you become for us the guide that brings us to Christ, the Way, the Truth and the Life. O Lady of Ta’ Pinu, in our pilgrimage towards our heavenly home, keep your eyes fixed on us that we may grow in love towards God, to each other and to our brethren so that we may always be testimony to Christ our Savoir.
Amen.