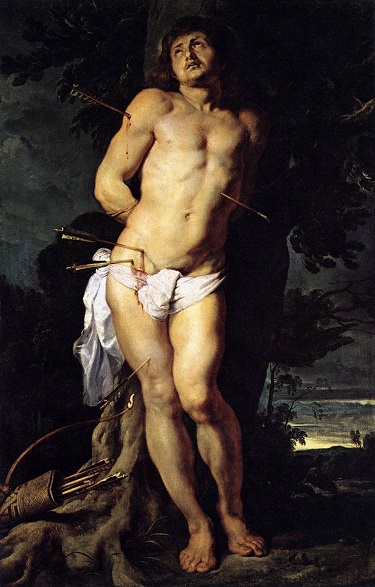 Nothing is known about Saint Sebastian's youth other than the fact he may have come from southern France and he was born in Gaul and educated in Milan. He joined the Roman army of the emperor Carinus, later becoming a captain under Diocletian.

When it was discovered that he was a Christian, who had converted many soldiers, Sebastian was ordered to be killed by arrows. The archers left him for dead, but a Christian widow nursed him back to health. He then presented himself before Diocletian, who condemned him to death by beating. His body, thrown into a sewer, was found by another pious woman, who dreamed that Sebastian told her to bury his remains near the catacombs. His relics are believed to be in the Basilica of San Sebastiano on the Appian Way, to which many pilgrims were attracted in the Middle Ages.

Sebastian’s martyrdom was a favourite subject of Renaissance artists, and it was depicted by, among others, Gian Lorenzo Bernini, Sandro Botticelli, Andrea Mantegna, Perugino, and El Greco; the saint is usually shown as a handsome youth pierced by arrows

Sebastian, like Saint George, was one of a class of military martyrs and soldier saints of the Early Christian Church whose cults originated in the 4th century and culminated at the end of the Middle Ages, in the 14th and 15th centuries both in the East and the West. Details of their martyrologies may provoke some skepticism among modern readers, but certain consistent patterns emerge that are revealing of Christian attitudes. In Catholicism,

Saint Sebastian is the patron of Knights of Columbus Council #4926 in the Roman Catholic Diocese of San Jose in California, serving the cities of Mountain View and Los Altos.

Dear Commander at the Roman Emperor's court, you chose to be also a soldier of Christ and dared to spread faith in the King of Kings, for which you were condemned to die. Your body, however, proved athletically strong and the executing arrows extremely weak. So another means to kill you was chosen and you gave your life to the Lord. May athletes be always as strong in their faith as their Patron Saint so clearly has been.
Amen.