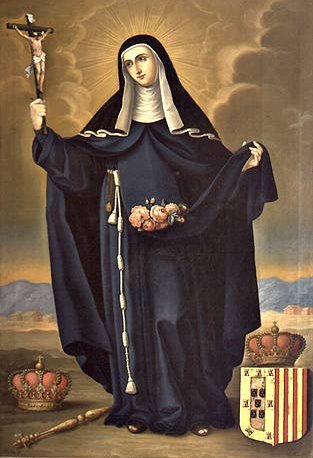 Also known as: The Peacemaker; Isabel of Portugal; Isabella of Portugal

Princess Elizabeth was born in 1271 at Aragon, Spain. She was the daughter of King Pedro III of Aragon and Constantia, great-granddaughter of Emperor Frederick II. When she was twelve, she was given in marriage to Dennis, King of Portugal and thus Queen of Portugal before she was a teenager. Even though her husband was unfaithful, she prayed that he would have a change of heart. Elizabeth became a saintly wife. She heard Mass and recited the Divine Office daily, but her devotions were arranged with such prudence that they interfered with none of her duties of state. Elizabeth gave her King two children, a daughter, Constance, who married Ferdinand IV of Castile, and a son Afonso (later Afonso IV of Portugal).

Like her great-aunt Saint Elizabeth of Hungary, for whom she was named, Saint Elizabeth of Portugal dedicated her life to the poor. Her charitable works were outstanding. She founded institutions for the sick, for travelers, for wayward women, for abandoned infants. She established a convent for nuns and provided dowries for poor brides. This gentle woman was also a peacemaker between members of her own family and between nations. Elizabeth managed to end a long standing feud between her husband and her son and managed to bring about a change in her husband's disposition before his death in 1324.

Her husband Dennis died in 1325. Elizabeth then retired to a convent of Poor Clares, which she had founded at Coimbra. She took the Franciscan Tertiary habit, wishing to devote the rest of her life to the poor and sick in obscurity.

Elizabeth lived eleven more years and died on July 4, 1336. She died at the age of sixty-five, while in the act of making peace between her children. She was buried at Coimbra, Portugal, and after her death, many miracles took place at her tomb.

Father of peace and love,
you gave Saint Elizabeth the gift of reconciling enemies.
By the help of her prayers
give us the courage to work for peace among men,
that we may be called the sons of God.
We ask this through our Lord Jesus Christ, Your Son,
who lives and reigns with you and the Holy Spirit,
one God, for ever and ever.
Amen.