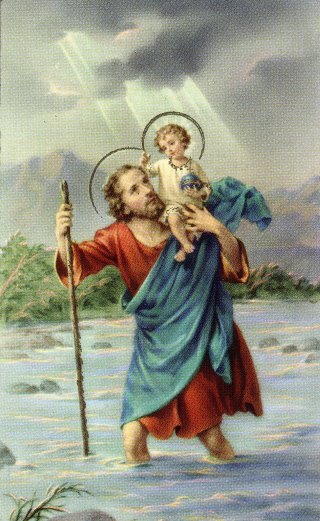 Saint Christopher (Christophorus, Christoferus), is a saint venerated by Roman Catholics, listed as a martyr from the reign of the 3rd century Roman emperor Decius (reigned 249 - 251). This one-time Catholic patron saint of travellers, whose name means "Christ carrier", is not mentioned in the Bible. Although St. Christopher is one of the most popular saints in the East and in the West, almost nothing certain is known about his life or death. Christopher is typically depicted as a tall, middle-aged, bearded man with a staff who wades across a river carrying the Christ child on his shoulders.

Christopher's original name was Offero. Born in Canaan, he was a powerfully built man who wandered the world in search of novelty and adventure. His characteristic legend is that one day when he was carrying a little child over a river, he felt the child's weight almost too great to bear. When they arrived on the other side, the child revealed himself as Christ, and explained he was so heavy because he bore the weight of the world. Some versions of the legend say the Christ-Child Himself baptized Offero with water from the stream. The saint then took a new name: Christopher meaning Christ-bearer. Christopher's service at the stream led to his patronage of things related to travel and travellers, people who carry things, etc.

Was Christopher really a Saint? No, Saint Christopher is a saint venerated by Roman Catholics. Canonization, the process the Church uses to name a saint, has only been used since the tenth century. For hundreds of years, starting with the first martyrs of the early Church, saints were chosen by public acclaim. Though this was a more democratic way to recognize saints, some saints' stories were distorted by legend and some never existed. Gradually, the bishops and finally the Vatican took over authority for approving saints.