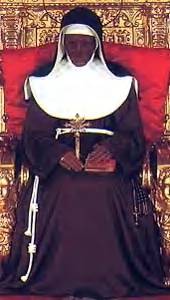 Catherine the daughter of a diplomatic agent of the Marquis of Ferrara was born September 8, 1413 at Bologna, Italy, as Catherine de Vigri. When she was ten years old, her father sent her to the court of the Marquis of Este in Ferrara, as a companion of his daughter Princess Margaret. The two girls, about the same age, became best friends. Their tutor taught them Latin, among other subjects, and Catherine later wrote some small works in that tongue. Their companionship continued until Margaret became engaged to the nobleman Roberto Malatesta.

At the age of 17, Catherine joined the Franciscan Order, an order which in the later years of her membership followed the strict rules instituted by St. Clare. Saint Catherine was sickly from the time she was twenty-two but she never complained. She performed many duties in the Monastery, from baking bread to training the novices. It was in this capacity that she began to write Le sette armi spirituali (The seven spiritual weapons). A collection of Catherine's other treatises, with her hymns and letters, has been published but not yet translated. Among the treatises is I dodici giardini (The twelve gardens), on the stages of growth in love of God; others are il Rosarium and I Sermoni.

By 1450 the Ferrara monastery had grown to include 85 women. In 1456, she traveled to Bologna to oversee the building of the Poor Clares' Corpus Christi Convent and became abbess of the new foundation. God graced Catherine with many heavenly visions and mystical experiences. On Christmas Eve in 1445 the Blesssed Mother appeared to her and gave her the Child Jesus to hold, and another time Jesus spoke to her from the crucifix in her room.

In Lent of 1463, Catherine became seriously ill, and she died on March 9 at Bologna, Italy. Buried without a coffin, her body was exhumed eighteen days later because of cures attributed to her and also because of the sweet scent coming from her grave. Her body is later enshrined in the chapel of the Poor Clares at Bologna. The flesh has grown dark, but that may well have been because of the heat and soot of the candles that were burned for years around her exposed remains. In that shrine, her body is not recumbent but seated! This was in response, it is said, to a request she made of one of her sisters to whom she appeared in a vision in 1500.

Patroness of: Art and Artists

Prayer to St. Catherine of Bologna

Dear saintly Poor Clare, so rich in love for Jesus and Mary, you were endowed with greatly talents by God and you left us most inspiring writings and paintings of wondrous beauty. You were chosen Abbess in the monastery of Poor Clares at Bologna. You did all for God's greater glory, and in this you are a model for all. Make artists learn lessons from you, and use their talents to the full.
Amen.