Red Scapular of the Passion 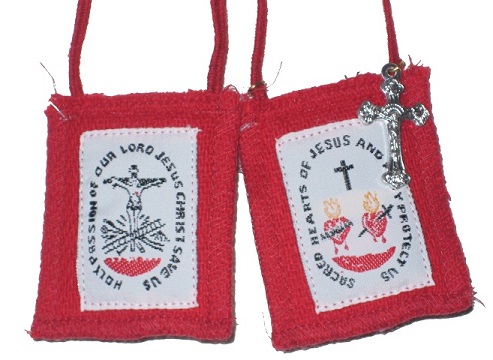 The Red Scapular of the Passion is a popular scapular and forms the uppermost portion of the Fivefold Scapular.

The scapular and its bands must be made of red wool and unlike most scapulars it is adorned with specifically described images which are essential to it.

One side of the scapular shows a crucifix, some of the Instruments of the Passion, and the words "Holy Passion of Our Lord Jesus Christ Save Us." The other side depicts a small cross above the Sacred Heart of Jesus and the Immaculate Heart of Mary plus the words "Sacred Hearts of Jesus and Mary, protect us." In the example shown above right, a red segment representing the Precious Blood is placed below the two hearts, although other examples omit that non-essential element and include others, such as angels.

It is a Catholic belief that the Red Scapular of the Passion was divinely revealed to Sister Appoline Andriveau, a member of the Daughters of Charity founded by St. Vincent de Paul. According to this belief, from 26 July 1846 to 14 September 1846 visions of Jesus and Mary appeared to the sister in her convent in Troyes, France and promised her that those who wear the scapular faithfully and contemplated the Passion of Jesus Christ would be granted a great increase of faith, hope and charity every Friday.

The sister described her visions as extremely specific and vivid. In letters to her spiritual director she wrote that Christ's face was so pale "that it threw me into a cold sweat. Our Lord's Head was bent forward. I thought that the long thorns that encircled His sacred Brow had induced this painful posture." She also described a scene reminiscent of the Pietà:

In describing a vision on the eve of the octave of the Feast of St. Vincent (July 26, 1846) the nun described Christ:

Sister Apolline described how she "shuddered" upon seeing Jesus "rudely struck against the wood of the cross" and quoted the Blessed Virgin Mary as saying that the "world is hurrying to its perdition because it considers not the Passion of Christ...Do all you can to bring and consider His sufferings. Do all you can to save the world." According to the revelation claimed by Sister Apolline, to wear the blood-red scapular was to be "clad in the livery" of Christ's passion and that it "will prove to us a strong armor against infernal assaults, an impenetrable buckler against the arrows of our spiritual enemies and, according to the testimony of Jesus Christ, to all who wear it with faith and piety it will be a pledge of pardon, a source of grace."

Sister Apolline also described a vision she received on the Feast of the Blessed Trinity in which she saw a beautiful river representing Christ's mercy in which those immersed glowed with bright light and "sheaves of diamonds and gold" while those refusing immersion "were covered with a dark vapor."

The redemptive theme of the apparitions and its promises regarding the wearing of a sacramental featuring the Immaculate Heart of Mary are similar to two other Marian apparitions that took place in France that earlier that century: the Miraculous Medal apparitions of 1830 and the Green Scapular apparitions of 1840.

Sister Apolline's spiritual director, Father J. B. Etienne, made a trip to Rome the following year. The Holy See accepted the nun's claims with unusual alacrity and Blessed Pius IX sanctified and approved the use of this sacramental by a rescript on June 25, 1857. The pope granted various indulgences to the wearing of this scapular and granted the Lazarists the faculty of blessing the scapular and investing the faithful with it. The Superior-General of the Lazarists was allowed to communicate the faculty of blessing and investing the scapular to priests outside the Lazarist order and such a scapular can now be invested by any Catholic priest.

In the United States of America, between 1953 and August 2008, the Red Scapular was officially promoted by the Marian Center operated by the Daughters of Charity of Saint Vincent de Paul (a branch of the same order to which Sister Appolline belonged). 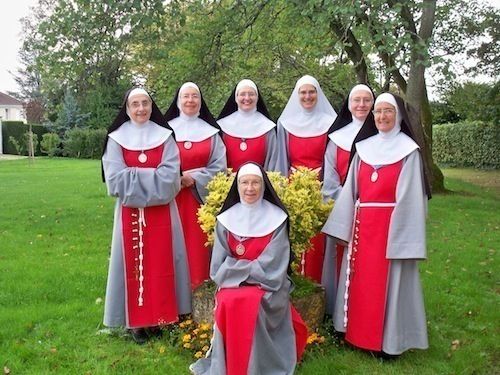