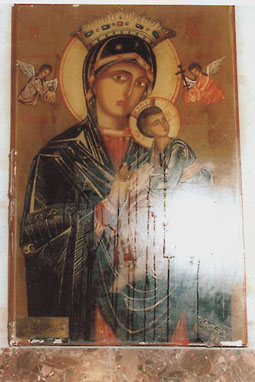 The icon of The Virgin Mary and the Christ Child
The Church of the Transfiguration, Ramallah, West Bank

It was the first day of the Jewish New Year, with a very tight closure on Ramallah; over 75 villages were sealed off from the Ramallah area.People at the Checkpoint were frustrated, very angry and upset as they were stopped from passing.I had to wait until all the rocks were thrown, all the shooting stopped, all the gas bomb smells had disappeared and then bravely or stupidly, I drove up to the Israeli soldier and begged to enter. "Go back home, it is forbidden to pass," he said. I told him I would love to have a holiday but my children were in school inside Ramallah and I must pick them up. As he looked at my foreign passport he suggested it was too dangerous to live here,maybe I should leave the country. This gave me the feeling it will take a long time to pass; I was faced with concrete blocks in front of my car, not just the soldier.

The Checkpoint is a nightmare and takes away your dignity. Still, admiring God's beauty in the Holy Land, I felt the presence of God and told the soldier I can light a candle for him in church so that God can protect him and keep him safe if he would just call his commander to let me pass. I must have been the strangest person he met that day. He made the phone call, brought the jeep over and pushed one concrete block so I could sneak my car by. I have waited hours so one more second to turn my head and thank him with relief was easy. Drenched with sweat in his bulletproof vest the Israeli soldier said:"Can you light that candle for me?"

I grew up as a child lighting candles in Greece all the time. So I went straight to the Ramallah Orthodox Church to fulfill my promise. I saw the parish priest, Father Yacoub Khoury, and asked him about the weeping icon of the Virgin Mary in the Transfiguration Greek Orthodox Church of Ramallah. This icon of the Virgin Mary with the Christ child was hand painted in l992 by a local iconographer - Mr Gabriel Gaylmantian from the Bethlehem area. Many icons in the church were glassed up by lay people and framed in order to preserve and better protect them.

On the morning of June 17, l998, Fr. Nicola Akal who teaches in the local Orthodox School went into the church to light candles as usual. The glass of the framed icon fell on the floor.The priest was a bit scared and left quickly to report the incident to Archimandrite Dr. Meletios Bassal, the superior at the Transfiguration convent right next to the church since l997.Both Father Nicola and Father Meletios thought the glass had possibly fallen from the wind blowing from an open window. But, right next to the icon, the vigil lamp was still lit from the previous day so this suggested it could not have been the wind. Both priests were a bit nervous about the fact that the glass had broken, so they left the church. Father Jeries Marzouka, the local parish priest, returned about five or six hours later to the church following a visit with relatives. He began to clean up the glass on the floor but cut his hand while touching the splinters. He screamed for help; Father Meletios came running and saw his hand bleeding. The archimandrite ran quickly to the convent to get a piece of cotton and alcohol to clean the blood. When he returned, Father Jeries' hand had stopped bleeding and the cut closed up. Then they noticed something else unusual: the blood had fully disappeared from his hand.When they observed the icon more carefully they noticed the icon had many streaks of oil. The icon appeared to be in tears. This shedding of tears of oil continued, and the oil was collected over the years to heal many people.

Since 1998 Father Meletios, who also holds a doctorate in psychology from the University of Athens, has seen many miracles. Thousands of people from all over the world have passed through the churchto see the icon. But after last September following the Palestinian Uprising, not many have come.I asked him what he first saw when he looked at this icon. He replied, he saw the icon full of oil and Christ's face was just a shining light to him. "I don't see Christ's face when I look at the icon, I just see a shining light,"Fr. Meletios explained to me. He means he did not see the details of the face like the eyes, the nose, the mouth, but instead saw a pure flashing light from Christ's face. I asked him why did he initially get scared and leave the glass on the floor for Father Jeries to cleanup: "I don't know, I just got scared. Maybe I am not worthy to see a miracle and just inside my inner self I felt a disturbance," he confessed. 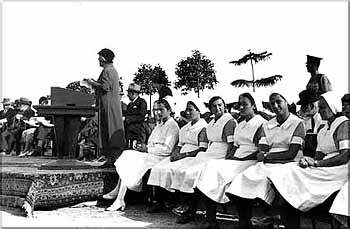 From the many miracles, Father Meletios told me the story of a Greek woman with skin cancer who had come to the Haddasah hospital in Jerusalem to receive treatment in September l998. The doctors encouraged her to return to Greece because nothing could be done to help her. Being a devout Orthodox Christian this woman went to the Holy Sepulchre to venerate the tomb of Christ; during the long wait she heard of the miraculous icon in Ramallah being talked about by two women who were in fact on their way to see the icon. She asked to go with them and venerate this miraculous icon. When she arrived at the Ramallah church and witnessed the icon crying and filled with oil she begged Father Meletios to be annointed by this oil. The nun in the convent helped the Greek woman to anoint all of her body with the oil. One week later the same woman returned with two Jewish doctors from the Haddasah hospital,claiming her cancer had completely disappeared and she had been cured.

I asked Father Meletios if there was one miracle that stands out in his mind from the last three years. He mentioned to me a Muslim woman who arrived at the church in June l998 with her husband after hearing the icon is a miraculous one. The Muslim woman could not see from one eye because her black pupil was enlarged. Father Meletios remained in the office while Father Nicola received this woman who said she believed in the Virgin Mary and her crucified son Christ and wanted oil to be put on her eye. Father Nicola had no choice but to let her venerate the icon and give her the oil. It took the woman about two minutes to exit the church and reach the front entrance where her husband was waiting.Fr. Meletios heard screaming and yelling:"I see, I see... I am well! " the woman was shouting. The husband was very upset and did not believe this was a miracle but instead was angry about what type of magic the priest did. The woman answered her husband by saying that: "Whatever you want to believe, believe; the significant thing is that I can see and I am well."

The Transfiguration Church of Ramallah was built about 150 years ago. It currently serves about 7,000 local Greek Orthodox Christians, all of whom are of Palestinian descent. However, before the l967 war there were 38,000 Christians in the area. Father Meletios said he is very worried that fifty years from now maybe there will not be any Orthodox Christians left in Ramallah. "I'm scared for the Church, our numbers are going down because of the propaganda people hear from America and from Canada. Basically, false dreams that you can get rich quick, live better and that all opportunities are available to you." Thus, Father Meletios thinks, it's not just the occupation and bad politics that force people to move away but propaganda. I asked Father Meletios what he thought people in other parts of the world should know about Orthodox Christians in the Ramallah community and he said: "We Palestinians, Greek (Byzantine) Orthodox live at a high religious level, we gather to pray and attend church - but we have a very low theological level. Our roots are Christian from the time of Christ and we live and walk the footsteps of Christ, but people in our community need to be more educated about the Orthodox faith". Finally, I asked Archimantrite Meletios about the new Greek patriarch, His All Holiness Patriarch Irineos of Jerusalem. He replied: "I think the Patriarch will now try to reinstate the trust of the people towards the Patriarchate because we have lost that for many years. It is encouraging the Patriarch will provide theological and liturgical training every few months for local priests. These workshops and training are vital to maintain the true faith and worship. And the Patriarch promised to take better care of the Greek Orthodox Christian Schools in the Holy Land. So we have great hope for a new era."

Father Meletios concluded by saying that the miraculous icon is God's way of communicating with us.Miracles are difficult to understand, they are beyond our logic, so we can only have faith: "That was the true Light, which lighteth every man that cometh into the world." Gospel of John 1 v 9.