Pope John Paul II died after a long fight against Parkinson's disease, among other illnesses, at the age of 84 on April 2 at 21:37 (GMT +2), 2005. It was the first Saturday, before the Sunday of Divine Mercy.

Please pray for one of the most loved popes of all time. Blessed John Paul II, who was born Karol Jozef Wojtyla, was elected pope of the Roman Catholic Church in October, 16 1978. He passed away on April 2, 2005, it was 9.664th day of his pontificate.

Saint John-Paul II, Pope said to be the Most

Recognized Person in the World

Pope John Paul II was beatified on 1st May 2011 in Rome, during the Sunday of Divine Mercy, the feast which he personally established on the request of the Lord Jesus, the request which was written in the Diary of Saint Faustina, the Apostle of Divine Mercy.

Karol Józef Wojtyla was born in Wadowice, a small city 50 kilometers from Cracow, on May 18, 1920. He was the second of two sons born to Karol Wojtyla and Emilia Kaczorowska. He made his First Holy Communion at age 9 and was confirmed at 18. Upon graduation from Marcin Wadowita High School in Wadowice, he enrolled in Cracow's Jagiellonian University in 1938 and in a school for drama. The Nazi occupation forces closed the university in 1939 and young Karol had to work in the Solvay chemical factory (1940-1944), at the beginning in a quarry and then in a factory in which the soda was purified, to earn his living and to avoid being deported to Germany. In 1942, aware of his call to the priesthood, he began courses in the clandestine seminary of Cracow, run by Cardinal Adam Stefan Sapieha, archbishop of Cracow. At the same time, Karol Wojtyla was one of the pioneers of the "Rhapsodic Theatre," also clandestine. After the Second World War, he continued his studies in the major seminary of Cracow, once it had re-opened, and in the faculty of theology of the Jagiellonian University, until his priestly ordination in Cracow on November 1, 1946 and over the next few years he wrote doctrinal texts, pursued a higher level of education, taught Catholicism and encouraged religious freedom. The result was a professorship in Catholic University in Lublin, Poland, a body of work that influenced the reforms of Pope Paul VI and a reputation for promoting and supporting his church in an oppressive Soviet regime. Elevation to auxiliary bishop soon followed, and while contributing to the 'Second Vatican Council' in 1963 he was made archbishop of Krakow. Four years later, in 1967, he was made a cardinal. During the next few years Wojtyla worked ceaselessly in Poland, gaining concessions from the communist government and widespread support from the public, while contributing to Vatican policy. In October 1978 he was elected Pope and took the name John Paul II.

Since the start of his Pontificate on October 16, 1978, Pope John Paul II has completed 95 pastoral visits outside of Italy and 141 within Italy . As Bishop of Rome he has visited 301 of the 334 parishes . His principal documents include 14 encyclicals , 14 apostolic exhortations , 11 apostolic constitutions and 42 apostolic letters. As Pope he published also five books : „God Created Them as a Man and a Woman. The Redemption of Body and The Sacrament of Marriage” 1986 r., “Crossing the Threshold of Hope” (October 1994) and “Gift and Mystery: On the 50th Anniversary of My Priestly Ordination” (November 1996) „Roman Triptych” 2003, „Stand up, let’s go” 2004, „Memory and Identity” 2005 r. John Paul II has presided at 131 beatification ceremonies ( 1,282 Blessed persons proclaimed ) and 43 canonization ceremonies (456 Saints) during his pontificate. He has held 8 consistories in which he created 201 cardinals .

Pope John Paul II is the most travelled pope in the history of the papacy. He is also a very popular and political pope. He has travelled to every country that would accept him, and has drawn huge crowds in well over 100 countries. He was a very vocal critic of the communist regimes of East Germany, the Soviet Union and his native Poland. He has also opposed economic sanctions against Cuba, Libya, Iran and Iraq, on the grounds that they hurt the people and are politically ineffective. 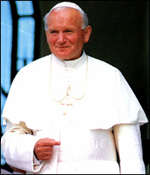 0n May 13,1981, Mehmet Ali Agca, an escaped murderer from Turkey, raised a pistol above his head in the piazza in front of St. Peter's Basilica in Vatican City and shot and wounded Pope John Paul 11. The pope spent nearly three months in the hospital. He later visited his attacker in prison.

Sanctuary of the Holy Mother of Jasna Góra (Czestochowa): http://www.jasnagora.pl/

Beatification: took place in Rome, on 1st May 2011, by Pope Benedict XVI.

Blessed John Paul, pray for us.
Immersed in the Father rich in mercy,
United with Christ, the Redeemer of man,
Full of the Holy Spirit, Lord and Animator,
Completely devoted to Mary,
Friend of Saints and Blesseds,
Successor of St Peter and Servant of Servants of God,
Guardian of the Church teaching truths of the faith,
Father of the Vatican Council and Executor of its teachings,
Consolidating Christian unity and the entire human family,

Fervent Lover of the Eucharist,
Indefatigable Pilgrim of this earth,
Missionary of all nations,
Witness to faith, hope and charity,
Enduring participant of Christ’s suffering,
Apostle of reconciliation and peace,
Promoter of the civilization of love,
Proclaimer of the New Evangelization,
Master appealing for sailing into the depths,
Teacher showing sanctity as the measure of life,
Pope of Divine Mercy,
Priest congregating the Church for sacrifice,
Shepherd leading his flock to heaven,

Brother and Master of priests,
Father of the consecrated,
Patron of Christian families,
Fortification of spouses,
Defender of the unborn,
Guardian of children, orphans and the abandoned,
Friend and Educator of youth,
Good Samaritan for those who suffer,
Solace for the elderly and lonely,
Proclaimer of the truth of human dignity,
Man of prayer immersed in God,
Lover of the liturgy of the Divine Sacrifice celebrated on the world’s altars,
Personification of industriousness,
In love with the Cross of Christ,
Exemplary pursuer of his vocation,
Enduring in suffering,
Model of living and dying for the Lord,

Admonisher of sinners,
Guidepost to those who lost their way,
Forgiver of wrongdoers,
Respecter of opponents and oppressors,
Advocate and Defender of the oppressed,
Supporter of the unemployed,
Concerned about the homeless,
Visitor of prisoners,
Fortifier of the weak,
Teaching everyone solidarity,

Pray for us, blessed John Paul,
So that we would proclaim to the world with life and words Christ the Redeemer of man.

Merciful God, accept our thanksgiving for the gift of the apostolic life and mission of Blessed John Paul II and through his intercession help us grow in our love for You and courageously proclaim the love of Christ to all people. Through Christ Our Lord. Amen. 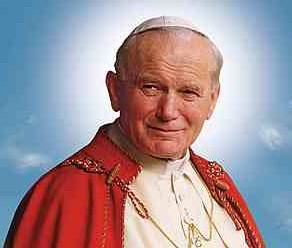 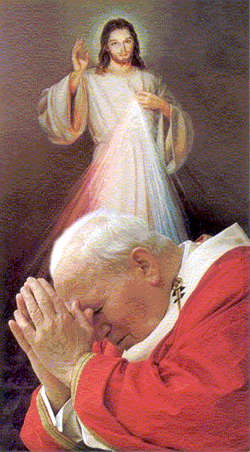 O God,
from Whom the just receive an unfailing reward,
grant that Your servant John Paul II, our Pope,
whom You made vicar of Peter and shepherd of Your Church,
may rejoice for ever in the vision of Your glory,
for he was a faithful steward here on earth of the mysteries of Your forgiveness and grace.
We ask this through Christ Our Lord.
Amen.

Eternal rest, grant unto him O Lord.
And let perpetual light shine upon him.
May he rest in peace.
Amen.

May his soul and the souls of all the faithful departed,
through the mercy of God rest in peace.
Amen.