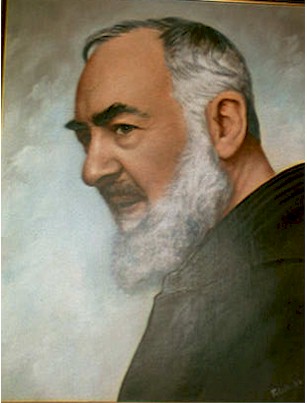 Padre Pio said: "Some people are so foolish that they think they can go through life without the help of the Blessed Mother."

Padre Pio was born in Pietralcina, Italy, on May 25, 1887. The 4th child of Grazio Maria Forgione and Maria Giuseppa De Nunzio, he was given the name Francesco, after a brother who died shortly after birth. From the time he was very young, it was his desire to join the Monks at the Monastery who "wore the beard". His dream to join the Catholic Capuchin Order of Friars Minor was realized in 1903 when he was admitted at the Friary of Morcone in the Province of Foggia. In 1916, struggling with ill health, he transferred to the Friary of Our Lady of Grace in San Giovanni Rotondo and there he remained. This humble Capuchin Priest from San Giovanni Rotondo, Italy, was blessed by God in many wonderful and mysterious ways.

Padre Pio and the Stigmata:

On September 20, 1918, he received the visible stigmata which he carried on his body for the next 50 years. They disappeared shortly before his death on September 23, 1968. Along with the stigmata, he was graced with the "odor of sanctity". He had the wounds in his palms, feet and in his side that corresponded to the wounds that Jesus Christ suffered during crucifixion. These wounds caused Saint Padre Pio great suffering and this pain was particularly evident during his celebration of the mass. As Saint Padre Pio was conducting mass he would seem to be reliving the pain of Christ’s crucifixion.

On October 22, 1918, Padre Pio wrote to his spiritual advisor, Padre Benedetto, describing how he received the stigmata. "On the morning of the 20th of last month, in the choir, after I had celebrated Mass, I yielded to a drowsiness similar to a sweet sleep. All the internal and external senses and even the very faculties of my soul were immersed in indescribable stillness. Absolute silence surrounded and invaded me. I was suddenly filled with great peace and abandonment which effaced everything else and caused a lull in the turmoil. All this happened in a flash. "While this was taking place, I saw before me a mysterious person similar to the one I had seen on the evening of 5 August. The only difference was that his hands and feet and side were dripping blood. The sight terrified me and what I felt at that moment is indescribable. I thought I should die and really should have died if the Lord had not intervened and strengthened my heart which was about to burst out of my chest. "The vision disappeared and I became aware that my hands, feet and side were dripping blood. Imagine the agony I experienced and continue to experience almost every day. The heart wound bleeds continually, especially from Thursday evening until Saturday. Dear Father, I am dying of pain because of the wounds and the resulting embarrassment I feel in my soul. I am afraid I shall bleed to death if the Lord does not hear my heartfelt supplication to relieve me of this condition. Will Jesus, Who is so good, grant me this grace? Will He, at least, free me from the embarrassment caused by these outward signs? I will raise my voice and will not stop imploring Him until in His Mercy, He takes away, not the wound or the pain, which is impossible since I wish to be inebriated with pain, but these outward signs which cause me such embarrassment and unbearable humiliation" (Letters 1, No. 511).

On another Friday, September 20, 1968, fifty years later, he celebrated Mass as he usually did at 5:00 A.M. He was extremely weak and was helped to the altar in a wheelchair. He celebrated the Mass while seated, with the permission of his spiritual son, Pope Paul VI. An unusual thing began to come about. Prayer groups and thousands of his Spiritual Children began to arrive in San Giovanni Rotondo atop Monte Gargano in southern Italy. There had been no arrangement made by the Capuchins, no organized gathering had been planned, yet his"children" as he affectionately called them gathered as if for some special occasion. Despite his weakness he heard confessions until his superior ordered him to rest. That was Friday.

On Saturday, he was so weak he had to spend the day in bed. The crowds gathered in Our Lady of Grace Church to pray for Padre Pio's recovery. God had healed him before; surely He would heal him again. On Sunday, the 22nd, he did celebrate his 5:00 A.M. morning Mass for all his prayer groups. Again he was wheeled into the church and celebrated Mass while seated. His voice was weak. It was apparent that he had little strength. In fact, at the end of the Mass he almost collapsed. He was helped from the altar by his brother Friars, and as he was wheeled into the sacristy he was heard to whisper, "Oh my children!" Few of his children realized that he had just celebrated his last Mass.
On that day, the crypt which had been made for Padre Pio was blessed by the bishop. Some years earlier, in 1959 at the opening of the new church, Padre Pio had said, "When the crypt is blessed God will call Padre Pio home." At that time, no one remembered his prophecy; they all felt he would be healed.

At noon, he came to the little window in his cell. His friars supported him as he waved his hand weakly and blessed the anxious crowd outside. About 1:00 A.M. the following morning Padre Pio rang the little bell beside him. He was seated in an arm chair dressed in his Franciscan habit. His superior sent immediately for the doctor in Padre Pio's hospital LaCasa Sollievo Della Sofferenza. Padre Pio went to confession. His Capuchin brothers administered the last rites. He renewed his Franciscan vows. His rosary was in his hands as it always was. He fingered the beads. He was unable to say the Hail Mary, but he repeated over and over again the names Jesus and Maria. About 2:30, he opened his eyes very wide and said: "I see two mothers." (His earthly mother and his Heavenly Mother.) As he exhaled his last breath, he whispered: "Maria."

The Sanctuary of Saint Pio of Pietrelcina is located
in San Giovanni Rotondo, Province of Foggia, Italy. 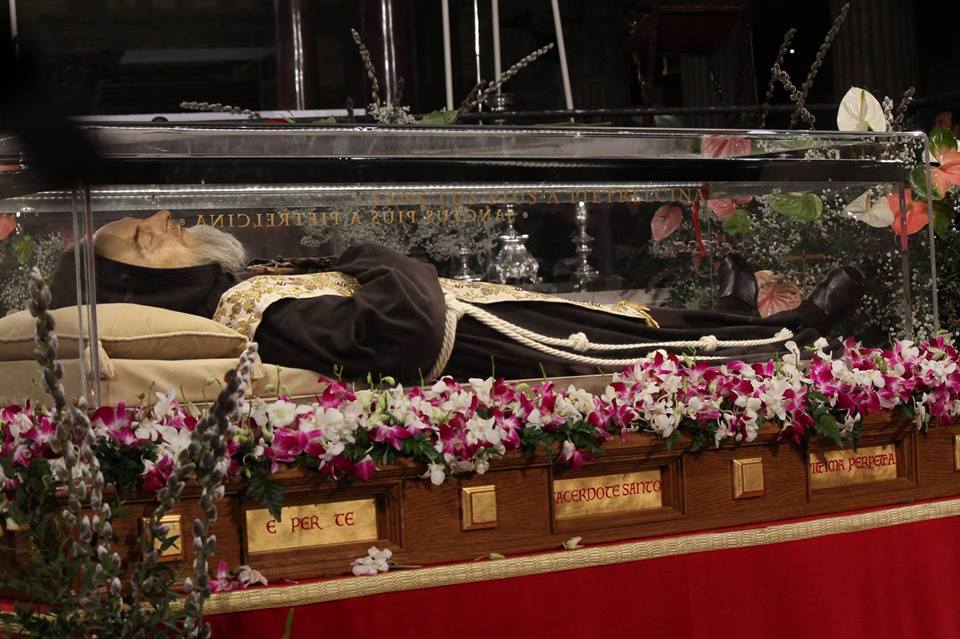 Later his superior said that his head fell gently to his chest and that "he died like a little bird." For a few moments his cell was blooming with the heavenly fragrance that so often came from his wounds during his fifty years of suffering. It was estimated that about 100.000 attended his funeral. Most of them had come to celebrate the fiftieth anniversary of his stigmata. They did not realize they would be witnesses to a great event in Church history - the "going home" of a future saint.

We have two champions near and dear to Christ, Our Lord: Our Blessed Mother and Padre Pio. Mary, filled with Grace and by far the most powerful intercessor in Heaven and Padre Pio, a humble priest who accepted the grace to surrender totally to Our Lord's Will. His spirituality is, as you know, centered on Christ, on his Church, on the Mass, on the Sacrament of Penance and around Our Blessed Mother and her Rosary. They are two champions who pray for us and protect us from the negative and destructive forces in the world.

Perhaps some of you would care to become a member of Padre's Pio's Spiritual Family. When he was just a lad, he had a vision; in it he saw thousands and thousands of faces from every country in the world. Many of them not yet born! Our Lord gave Padre Pio to understand that these were his spiritual children. Later in life, he promised them that, metaphorically speaking, he would wait outside The Gates of Heaven until every last one of his children was safely inside. He requires two things, 1) That we be a good practicing Catholic; 2) That we receive the Sacraments often. Not terribly difficult. Of course, only Padre Pio can say who is not his spiritual child. But we can ask him in prayer. We can send him our Guardian Angels. How often did he say, "Send me your Guardian Angel." If we do that and fulfill his two requirements we can rest assured that our dear Padre will include us in his "spiritual family."

The Beatification of Padre Pio:

Padre Pio's beatification Mass took place in Rome on May 2, 1999. In a colorful and historic ceremony, Pope John Paul II declared the Church's belief that Padre Pio is among the elect of God's people. The Pope, a devotee of Padre Pio, bears witness to a prediction made by Padre Pio many years earlier - that Carol Woytila would become pope.

In one of the largest such ceremonies in history, Pope John Paul II canonized Padre Pio of Pietralcina on June 16, 2002. It was the 45th canonization ceremony in Pope John Paul's pontificate. More than 300,000 people braved blistering heat as they filled St. Peter's Square and nearby streets. They heard the Holy Father praise the new saint for his prayer and charity. "This is the most concrete synthesis of Padre Pio's teaching," said the pope. He also stressed Padre Pio's witness to the power of suffering. If accepted with love, the Holy Father stressed, such suffering can lead to "a privileged path of sanctity."

The Blessed Mother and Padre Pio: 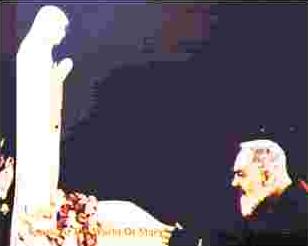 When you find yourself close to God in prayer,
speak to Him if you can,
and if you unable to do so stay this way.
Let yourself be seen,
and do not disturb yourself further.

May Mary be the star which shines on your path, and may she show you the safe way to reach the Heavenly Father. May she be like an anchor to which you must be more closely attached in time of trial. 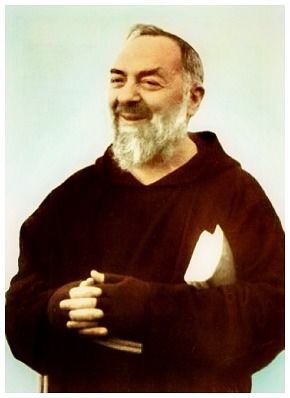 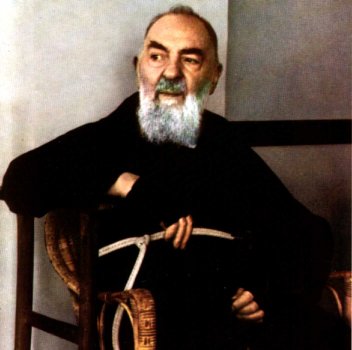 Oh Jesus, full of grace and charity, victim for sinners,
so impelled by Your love of us that You willed to
die on the cross, I humbly entreat Thee to glorify in
heaven and on earth, the servant of God, Padre Pio
of Pietrelcina, who generously participated in Your
sufferings, who loved Thee so much and laboured so
faithfully for the glory of Your heavently Father and
for the good of souls. With confidence, I beseech Thee
to grant me, through his intercession, the grace of . . .
which I ardently desire.