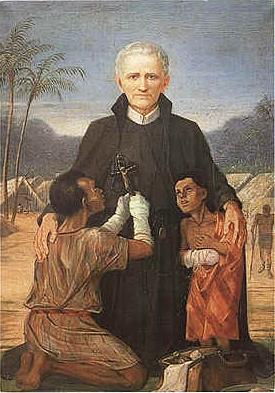 Petrus Norbertus "Peerke" Donders was born on October 27, 1809 in a primitive house on the Heikant van Tilburg (now Tilburg-Noord) as the son of a poor house weaver. The house consisted of a small living room with two box beds and a work area with a loom. Here Peerke's father, Arnold Donders, earned 6 to 10 nickels per twelve-hour working day. Tremendous faith in God was his only wealth. Peerke seems to have been a devout little fellow. He wanted to become a priest from a very young age. He gave sermons to the neighborhood children from a washtub. Later he gave them religion lessons. After completing primary school, Peerke Donders had to contribute to the maintenance of the family at the age of twelve. He first learned to spin, then he helped his father behind the loom. Peerke and his father worked long hours; when busy they even worked until noon on Saturday evening and started again at noon on Sunday evening. This diligent work did not stop Peerke Donders from attending church frequently. Except on Sundays, he went to church every morning to pray. He also liked to pray in the Hasselt chapel, where today a memorial stone commemorates his visits.

In 1831 he was rejected for military service; then he went to seek another 'service'. He wrote a letter to the pastor asking him to make an effort to get him into the seminary. Finally, he can become a working student and report to the gate of the institute. With his inadequate primary school education, he embarked on an almost hopeless task. With great difficulty he made it, and in 1837 he was able to attend the Groot Seminarie. But because Peerke felt a lot for the mission, he was advised to enter the monastery in order to achieve his mission goal more easily. In the Netherlands the monasteries at that time were not allowed to accept newcomers, so he went to Belgium and tried it with the Jesuits, Redemptorists and Franciscans. But he was rejected everywhere: too old, too little knowledge and talents, too weak health. Then he was allowed to continue his studies at the seminary; and that he was not a weak student, it became clear from the grades he obtained (an average of 8).

In 1839 Mgr. Grooff from Suriname about looking for priests. At that time he only had one missionary in his mission. At the seminary he painted the hopeless situation: the suffering of the slaves, the misery among the lepers and the shortage of priests. He implored his audience that at least some would follow him. The only one who came forward was Peerke Donders. In view of his departure for the mission - Suriname - his ordination to the priesthood was brought forward (June 1841), but it took until 1842 before he could leave Den Helder. After 46 days of sailing he arrived in Paramaribo. How happy the people were when he arrived. But Mgr. Grooff spoke of an "iron cross" in his welcome address; he thought he should make the difficulties as clear as possible to Peerke Donders. Suriname was, except for a narrow coastal strip, one big jungle. The only transport routes were creeks and rivers with rapids and all kinds of obstacles such as boulders and fallen trees. People had to cut their way through the forests and the climate was murderous. He went to Suriname as world lord and would later be admitted to the Congregation of the Most Holy Redeemer (CssR) about which more later.

The Apostolic Vicar said that most of the missionaries before him had succumbed in a short time and he was already completely exhausted. The population was very unfavorable to the whites because of slavery. On the plantations the slaves were treated like cattle and every priest was banned by the owners as much as possible. In the jungles, a missionary had never reached the Indians. Peerke Donders was appointed chaplain in Paramaribo to learn the language of the common population (Sranan) and to get used to the climate. He was also assigned the leper colony Batavia, an abandoned plantation on the Coppename River, two days' journey by canoe. He also began to visit the plantations from the city. He was chaplain in Paramaribo for fourteen years. He was very busy every day: religion lessons for the children, visits to the sick, house calls. While everyone in the tropics rests in the afternoon because of the heat, Peerke trudged on tirelessly in his black bar. In 1852 Mgr. Grooff (51 years old) and the chaplains Schepers and Donders remained alone. The work doubled, but Peerke Donders was hard to beat. He visited the poorest slave huts, everything he owned went to the poor and he himself lived in the greatest poverty in his dilapidated presbytery. 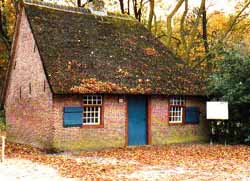 In 1856 Peerke Donders was transferred to Batavia. Mgr. Schepers then had 4 missionaries, but no one dared to live there, only Peerke Donders. The leprosy village bordered on three sides to an impenetrable jungle, the front was on a very wide river. Escape was impossible for these exiles. They had to nurse each other. In their huts the lepers lay on the ground and with their mutilated limbs they had to prepare their own food. The atmosphere of discontent was unbearable; it was hell there. Peerke Donders worked here for 27 years. Every day he traveled to visit the sick, to care for them, to encourage them, to prepare the dying for their death, and to bury the dead. At night he slept on the plank floor and spent many more hours praying, happily in the cemetery, his arms outstretched before the great cross that had been erected there.

In 1865 the Surinamese mission was entrusted to the Redemptorists. While only 5 priests had come to Suriname in the previous 17 years, now there were 25 priests in the same number of years (1865-1883). In 1866 the two remaining priests Romme and Donders joined the Redemptorists, Peter was 57 years old. One of the reasons for his intervention was the point from the Redemptorist rule: "They will work especially among the most desolate." Peerke Donders now got a fellow brother on Batavia. For him this was the reason to also start missionary work among the Indians. This has been a very difficult job. He regularly went into the jungle and slept alone in a hammock in the wilderness.

In 1866 the Surinamese mission was dedicated by Rome to the congregation of the Redemptorists. Peerke Donders applied for and was admitted to this congregation; he took his monastic vows on June 24, 1867. Since then he has stayed on Batavia in the company of a colleague, which enabled him to be the first priest to undertake missionary journeys to the Indians and Maroons living in the jungle.

From 1866 - 1882 Peerke Donders had the help of 9 fellow brothers. Only 3 lasted a little longer than one year, and 3 of those he has been alone. In 1882, aged 73, Peerke Donders was recalled to Paramaribo. He first enjoyed community life in a monastery and it really benefited him. It did not take long. A few days before he turned 76, he was transferred back to Batavia. There he met Brother Jan Bakker, ordained a priest two years earlier and who had become a leper himself. Who better to take care of him and take over the work than Peerke Donders? Despite his advanced age, he was once again willing to make this sacrifice. Again he was busy all day and also visited the surrounding plantations and Indian villages. But he was already walking dead. December 31, 1886 he gave his New Year's speech. The 'blissful end' of that evening would literally be fulfilled.

In the middle of that night he got terrible pains, it was an acute kidney infection. Father Jan Bakker, a leper himself, did what he could. The patient was in excruciating pain, but no complaint was made. On January 12, he was asked, "How are you?" Peerke Donders replied: "I have nothing to complain about, have a little patience with me because I will die at three on Friday afternoon". It was a prediction: two days later on Friday, January 14, 1887, at about three o'clock, he died in Batavia, district of Saramacca (Suriname), until the last moment awake and praying in silence. Exactly one hour later a boat arrived to take the patient to Paramaribo. It was too late; as he had lived in solitude, he also died alone. 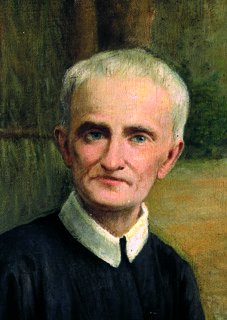 His remains were buried in Batavia's cemetery on January 15. This in itself is remarkable, because the remains of Dutch people who died in our country were often transported to the Netherlands to be buried there. It was excavated in 1900, transferred to Paramaribo and buried behind the sacristy of the cathedral on 28 July. Since January 17, 1921, it rests in a mausoleum in the left wing of the priest's choir in the cathedral. The grave of Peerke Donders in the cathedral is particularly honored. There is always a flower or a plant on his grave and every month a prayer time is held at his final resting place. Especially on the day of his birth and death, the crowd is great. The site of the former leper colony Batavia on the Coppename River is currently being restored. There are regular pilgrimages. A village is named after him: "Donderskamp", an Indian village in the district of Saramacca on the Arawara. The approximately 250 inhabitants are Karaïben (an Indian people in the coastal area of ​​Suriname).

In the Netherlands people began to worship and invoke Peerke Donders shortly after his death. The original birth house was demolished shortly after the death of father Arnold Donders, but was reconstructed and opened on January 14, 1931, with great interest. The still existing original well next to the birth house was soon called 'de Pater Dondersput'. On October 28, 1923, the wooden prayer chapel next door was erected and consecrated. Shortly afterwards the weekly plea was also started (now every Tuesday afternoon at 2:30). Every year around Pater Donders' birth and death day, groups come by bus to the Pater Donders Chapel (Pater Dondersstraat 16, Tilburg Noord).

It has now been scientifically proven that the Brabant priest Peerke Donders (1809 - 1887) did not have leprosy.

That was announced on Friday in Paramaribo during a scientific conference at the Anton de Kom University of Suriname. No presence of the leprabacil has been demonstrated in the DNA material, says Jaap van Dissel.

The secretariat of the Pater Donders Association is located: De Schans 95, 5011 EN Tilburg. Telephone: 013 - 455 06 63. You can register as a member or donor at this address. The Petrus Donders Contactblad is received four times a year.