Our Sweet Lady of Den Bosch 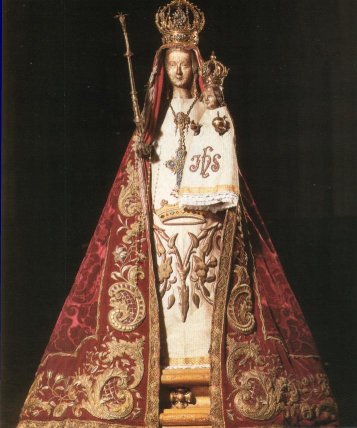 Chronicles show that from 1380, almost two centuries after the construction of the Saint John in Den Bosch had started, people began to worship the statue of the Virgin and to make pilgrimages to it. In that year the statue of grace was found in one of the construction sheds of St. John's. The construction of the church was still ongoing and it would be many years before it was completed. Experts concluded that the statue must have been made in the early thirteenth century. It probably comes from the first St. John's Church, which was demolished in 1280 to be replaced by a new one. The statue is 1 meter 15 high and is carved from oak. Mary is presented standing up. Mary has an apple in her right hand; She carries the baby Jesus on her left arm. The chapel of the Blessed Virgin in the new St. John soon developed into a place of pilgrimage. The miraculous statue attracts pilgrims from all parts of Europe. Countless miracles take place and Marian worship is getting more and more exuberant.

In the fight against the rule of Spain in 1603, Prince Maurice had appeared with an army for the third time before 's-Hertogenbosch, to take the city, but to no avail. The year 1629 marked an important turning point in the history of 's-Hertogenbosch. Frederik Hendrik (a son of William the Silent and a half-brother of Maurits) showed up in 1629 with an army of 40,000 men, while 150 ships closed in the city from the Maas side. During the siege, the statue of the Sweet Mother was placed on a throne opposite the pulpit in St. John's Church, and Catholics came to pray daily, led by Michael Ophovius (the bishop without fear). After a siege of four and a half months, the city collapsed on September 14 and was captured from the Catholic Spaniards. Frederik Hendrik was commander-in-chief of the States army and therefore a Protestant. The problem is he bans the Catholic Church. The government wants everyone to become a Protestant.

At the capitulation it was stipulated that the clergy could keep all statues, paintings and ecclesiastical ornaments, but Frederik Hendrik's soldiers did not mind this; they started their destructiveness in St. John's. Then two Carmelites entered the church, seized the statue, and brought it to Bishop Ophovius. He did not consider the statue to be safe in his own home and therefore left it for safekeeping with Anna van Hambroeck. This lady was a pious woman who belonged to one of the principal families of the city. It was therefore believed that she would be spared by the Protestants. Yet Anna did not consider the statue of Mary safe in her home for long, so she decided, on the advice of the bishop, to bring it to Belgium. She packed the statue in a large suitcase and, despite the close surveillance, ended up outside the city gate. The journey was not easy, because enemy soldiers, who stripped the Meierij, stole three more silver crowns from Our Lady. Nevertheless, she finally arrived safely with her treasure in Antwerp on one of the last days of 1629. 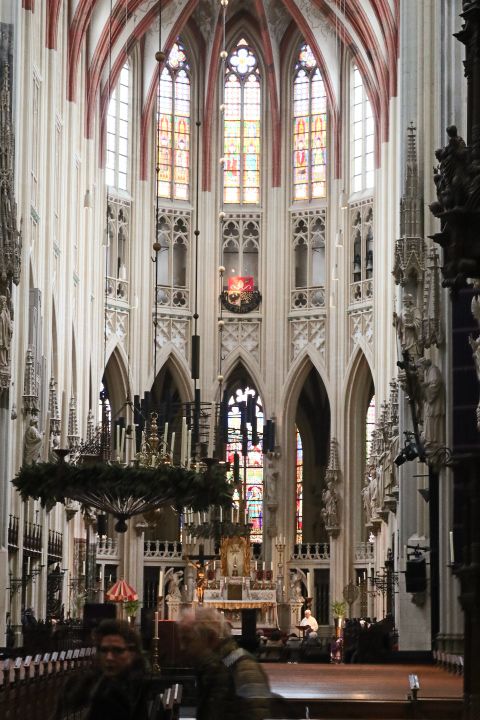 In the meantime, Bishop Ophovius had also fled to Belgium. Anna van Hambroeck went to visit him in Lier. For many years Ophovius was prior of the Predikheren monastery in Antwerp and confidant of Princess Isabella Clara Eugenia. This Isabella (daughter of the Spanish king Philip II) had heard that the Sweet Lady had fled from Den Bosch to Belgium. Now she sent her secretary De La Faille to the bishop to ask for the statue to be sent to Brussels. After much insistence from the princess, Bishop Ophovius finally gave permission for this, but on the express condition that Brussels would never regard the statue as property and would therefore return it to 's-Hertogenbosch in more favorable circumstances. A notarial deed of this was drawn up, of which a sealed copy was kept. It is due to this that the image of the Sweet Mother has not been lost forever to 's-Hertogen-bosch. Also in Brussels the annual Maria dealings of 's-Hertogenbosch were continued, for which many Catholic residents of Bosschen came over. On March 25, 1630, the Sweet Lady was taken to the deanery church of Saint Géry in Brussels. When Isabella died, the Spanish king Philip IV took over the administration of the Southern Netherlands. His brother, Cardinal Ferdinand of Austria, had the statue transferred to the church of Koudenberg in Brussels in 1641.

The veneration of Our Lady of 's-Hertogenbosch continues in Brussels. St. John is now a Catholic church again and the ancient statue of the Virgin Mary is sorely missed. After 1840, attempts were made to bring the statue back to Den Bosch. The desire to see the Sweet Mother return to her old place became more and more ardent. But Brussels turned out not to be willing to hand over the treasure it had once acquired. It was claimed there that the rights of Den Bosch had become time-barred for so long. Then the administration of the diocese of 's-Hertogenbosch came into the hands of Mgr. J. Zwijsen, a man of steel willpower and perseverance. Due to his repeated and persistent efforts, the church council of Koudenberg finally decided in the autumn of 1853 to return the miracle statue to 's-Hertogenbosch, after a similar statue had been made for the St. Jacob's Church in Brussels. To retrieve the statue, Mgr. Joannes Zwijsen Mr P.W. van Liempt, square of the cathedral, to Brussels, with, as a companion, the chaplain of Tilburg Joh. van der Lee, a native of Bosschen. They returned via Mechelen, where they received the old Miracle Book from the cardinal and placed the statue in the chapel of the mother house of the Sisters of Our Lady of Mercy in Tilburg on December 17, 1853. To the delight of the sisters and others, the Sweet Mother stayed there from 17 to 26 December. In commemoration of this, the Superior General donated a golden heart and a cross, which still adorn the statue.

On St. Jan, the patron's feast of the cathedral, Mgr. Zwijsen, return the image to her sanctuary. A novena preached by the Redemptorist fathers preceded this feast day, and the joy of the people was exuberant when the Sweet Mother was carried into the centuries-old St. John's Church in a magnificent procession. For the time being, the statue was given a place in the present-day Corpus Christi Chapel, until the Sweet Lady on Candlemas, February 2, 1855, once again took her centuries-old throne in the restored Maria Chapel. After an absence of 223 years, the Sweet Mother had returned to Her home. After his consecration as Bishop of 's-Hertogenbosch and Archbishop of Utrecht in 1853, Mgr. Zwijsen contacted his Mechelen colleague, Cardinal Sterckx. This appears to help: the Brussels church council agrees to the restitution. In December 1853, sculpture and Miracle Book return to 's-Hertogenbosch. On December 27, the feast of the patron saint of Saint John the Evangelist, the statue of the Sweet Mother is brought in a solemn procession from the chapel to the high altar in Saint John, carried by members of the Brotherhood of Our Lady and accompanied by the guilds of Den Bosch, Elshout and Mariahout. On March 27, 1878, the statue was solemnly crowned in the name of Pope Leo III by the bishop of the city, Mgr. Adrianus Godschalk.

In honor of the 150th anniversary of the return of the statue, Bishop Hurkmans of the diocese of 's-Hertogenbosch has proclaimed 2003 the Marian Year. It starts on April 30, 2003 and ends on December 27. That day it will be 150 years ago that the image of the Sweet Mother returned to Saint John. With trumpet blast and drum roll, the celebration of the jubilee of Mary, the Sweet Lady of Den Bosch, started on April 30 this year. In October 2003, the Sweet Lady of Den Bosch goes "on tour" in the diocese. With the tour of the statue through the diocese, the diocese wants to re-acquaint believers with Mary. The miraculous statue of the Virgin Mary will be on display in October 2003 in five places in the diocese: Vlijmen, Geldrop, Uden, Wijchen and Tilburg. A special anniversary rosary is being issued as part of the Marian year. The Marian Year of the diocese of Den Bosch is in line with the 150th anniversary of the 'restoration of the episcopal hierarchy' in the Netherlands in 2003. In 1853, Bishop Zwijsen was appointed Archbishop of Utrecht and Bishop of 's-Hertogenbosch. This put an end in the Netherlands to the status of 'mission church' that was established by Rome after the Reformation. 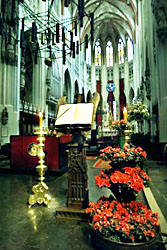