Our Mother of Perpetual Succor

Patroness of the Philippine Islands

History: Also known as Our Lady of Perpetual Help

The picture of Our Lady of Perpetual Succor is painted on wood, with a background of gold. It is Byzantine in style and is supposed to have been painted in the thirteenth century. It represents the Mother of God holding the Divine Child, while the Archangels Michael and Gabriel present before Him the instruments of His Passion. Over the figures in the picture are some Greek letters, which form the abbreviated words, Mother of God, Jesus Christ, Archangel Michael, and Archangel Gabriel respectively.

An ancient tradition has it that the original picture of Our Lady of Perpetual Succor was painted by the evangelist Saint Luke. However, the more likely theory is that it was painted, not by St. Luke, but by some Greek artist of the 13th century. It's subsequent history is interesting and in a sense providential.
The island of Crete was threatened with invasion by the dreaded Turkish armies at the end of the 15th century. Thereupon many of it's inhabitants, realising the consequences of such an invasion, decided to emigrate to Italy. Among their number was a wealthy merchant, in whose possession the picture was. He treasured the picture and had a strong devotion to the Madonna of Perpetual Succor. Tradition tells of a fierce storm, which this party of exiles encountered on the trip to Italy. The survival of the entire party was attributed to the intercession of the Madonna, whose picture they reverently carried with them on the voyage. It was only through Divine Providence that he survived a wild tempest and landed on shore. After a year, he arrived in Rome with this picture.

The picture was placed for public veneration in the Augustinian Church of St. Matthew's Church in Rome. It remained there from 1499 until 1798. One year short of its 300th anniversary at that spot, history intervened. The troops of the French Revolution broke into Rome. As part of their "improvement" plan for the Eternal City, they decided to tear down some 30 churches. St. Matthews was one of them. So the Augustinian Monks removed the picture to their private chapel for safekeeping.

As time went on, most of the people who knew the history of the painting died. The portrait was largely forgotten. Finally an old Augustinian Brother, who had been a sacristan in St. Matthew's as a young man, decided to pass on the heritage of Our Lady of Perpetual Succor. He pulled aside one of the young altar boys and told him the story. Michael Marchi was too young to appreciate entirely what was being told to him at the time. It was many years later before the phrase "Perpetual Succor" came to mean anything to him. He was a Redemptorist priest when Pope Pius IX called the Redemptorists to Rome to set up their headquarters. They had bought land over the site of old St. Matthews and were building the church of St. Alphonsus.

Patron Saint of the Sick, Police, Paratroopers and Grocers.

Link: "Shrine of our lady of good help"

Novena to Our Lady of Perpetual Succor

Arguably the most popular Madonna by far, her maternal love and protection show so clearly in her image, sheltering the frightened Child Jesus, who, running to her consolation so fast that he has nearly lost his sandal, sees the Archangels Michael and Gabriel with the instruments of His Crucifixion.
In times of need we can follow the example of Our Lord, and flee to the protection of His, and our, Blessed Mother.

Say each day for nine days:

See at your feet, O Mother of Perpetual Succor, a poor sinner who has recourse to you and confides in you.
O Mother of Mercy, have pity on me! I hear you called the refuge and the hope of sinners; be my refuge and my hope.
Help me, for the love of Jesus Christ; stretch forth your hand to a poor fallen creature who recommends himself/herself to you, and who devotes himself/herself to your service forever. I bless and thank Almighty God, who in His mercy had given me this confidence in you, which I hold to be a pledge of my eternal salvation.
Mary, tender Mother, help me. Mother of Perpetual Succor, never allow me to lose my God. Amen.
(Say the Our Father, Hail Mary, and Glory Be, three times each)

Prayer to Our Lady of Perpetual Succor 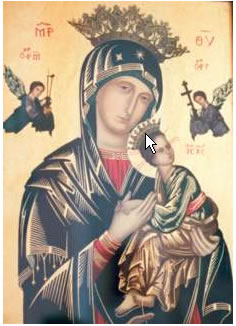 Mother of Perpetual Succor,
you have been blessed and favored by God.
You became not only the Mother of the Redeemer
but the Mother of the redeemed as well.
We come to you today as your loving children.
Watch over us and take care of us.
As you held the child Jesus in your loving arms, so take us in your arms.
Be a mother ready at every moment to help us.
For God Who is mighty has done great things for you,
and His mercy is from age to age on those who love Him.
Our greatest fear is that in time of temptation,
we may fail to call out to you, and become lost children.
Intercede for us, dear Mother, in obtaining pardon for our sins, love for Jesus, final perseverance, and the grace always to call upon you, Mother of Perpetual Succor.
Amen.