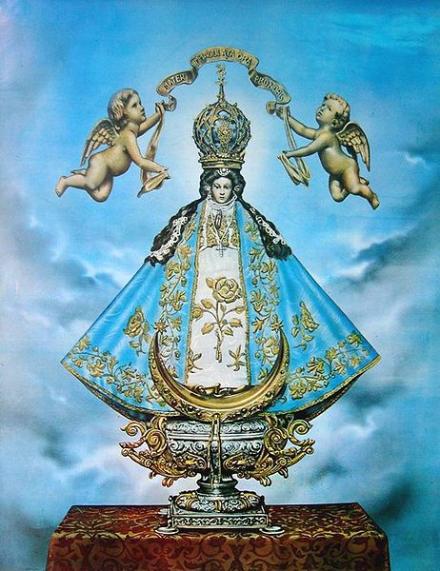 The year is 1623. A family of aerial acrobats was traveling through the towns and villages of rural New Spain. One of their stops was San Juan Bautista Mezquititlán, a small town in what is now the northeastern part of the Mexican state of Jalisco. Soon after they arrived the acrobats set up their poles and ropes and were eager to perform to the delight of the villagers that evening. To heighten the suspense of their show, the father of the acrobatic family instructed that daggers facing upward should be inserted into the dirt beneath their performance space, which was routine for them to do. Audiences were always thrilled at the element of danger that the daggers introduced. That afternoon, while practicing, one of the girls of the family, who was about 7 at the time, was swinging on the ropes, lost her grip, then slipped and fell into the field of daggers. Her panicked parents, horrified at the sight, rushed to her aid, but she was already dead.

Amidst her parents' and the inhabitants' great sorrow, the small body was shrouded and taken to the chapel for a funeral vigil. It was then that Ana Lucia brought the old image of the Immaculate Conception and placed on the girl's chest. 'Pray to Cihualpilli", Ana Lucia, who had great faith, told them, and they did so fervently. The terrible sorrow gave way to immense astonishment, for at the very instant that they were all praying, the girl came back to life and got up, completely healed. This is what is known as the Virgin's First Miracle, and in appreciation, the family of trapeze artists covered the costs of the restoration of the deteriorated image. Also, they spoke of the miraculous event throughout New Galicia, and very soon, the devotion to the Virgin extended to all of the New Spain, the region that is now comprised of Mexico and Central America.

As a result of this miracle, there was a steady increase in the numberof pilgrims who came to the Virgin, not only Indians, but Spanish and mestizoas well. The Virgin acquired her own local identity as Our Lady of San Juande los Lagos, separate from her original identity as the Immaculate Conception.From the early 17th century, a fair was held each year around the anniversaryof the statue's installation in the shrine (November 30). This market fairincreased in popularity until the middle of the 19th century, after whichtime attendance declined. The fair was terminated in the early 1900s, althougha fiesta is still held.

Construction began on the present church in 1732. The church was builtin the Mexican baroque style of the time, with an ornamented facade surroundedby the plainer lower walls of the bell towers. Although the towers werenot completed until 1790, the Virgin was installed in the new church in1769. Pope Pius XII recognized the church as a basilica in 1972. The churchwas elevated to the Cathedral of the Diocese of San Juan de los Lagos byPope Paul VI.

The present church, begun in 1732, was built in the Mexican baroque style. The statue of the Virgin was installed in 1769 and the bell towers were completed in 1790. In 1972 the church was recognized as a basilica. Inside the church, upon a platform with an upturned crescent moon, stands the statue of the Virgin. The face is dark in color, the eyes widely spaced and the traits somewhat aquiline.

About 20 inches (50 cm) tall, the statue was made by the Purépecha Indians of the state of Michoacán using an indigenous technique called titzingueni, in which a frame of wood is covered by a paste of corn pith and orchid juice, and then coated with gesso and painted. Similar statues are still venerated in other parts of Jalisco, including many different of statue but different name such as Nuestra Señora de Los Altos (Our Lady of Los Altos) in town of Atotonilco El Alto and San Francisco de Asís, Jalisco.; Nuestra Señora de la Salud (Our Lady of Health) in Patzcuaro and the Virgin of Zapopan in the city of Guadalajara. Sometime in the late 16th or early 17th century the statue was modernized by being enclosed in a frame and draped with clothing. The Virgin’s hands are joined in prayer, she has long brown hair, and wears a white gown and blue robe. The statue’s body is covered with a golden crown in Byzantine style. Above the image are two angels of silver, supporting between them a silver banner with the Latin inscription in blue enamel: Mater Immaculata ora pro nobis (Immaculate Mother pray for us).

At the end of January and beginning of February each year a great pilgrimage occurs to the shrine and the city grows many times in size. This festival is attended by more than a million people, many of them walking, from all over Mexico. During a week of festivities there are hundreds of temporary stalls selling pilgrimage icons, multiple bands of musicians playing around the great basilica, fireworks demonstrations in the evenings, and a palpable feeling of spiritual joy descend on the town. If a family member falls ill or undergoes a serious surgery for example, you can promise the Virgin to make the pilgrimage if that person makes it out okay.

The devotion carried over to California by people from Jalisco. In the 1970s, George Martinez revived the devotion in San Francisco, California and a monthly mass was celebrated. In 1979 Martinez convinced the bishop of San Juan to allow the statue to come to California, and the statue left Mexico for the first time ever in 1980.

The devotion also arrived in New Mexico and the church of Nuestra Senora de los Lagos was built in 1828 in Talpa, New Mexico.