Seventy kilometers from the city of Loja in the mountains of southern Ecuador is the town of El Cisne, the site of a much venerated Marian shrine. The basilica of El Cisne was built in 1742 and modeled after a similar basilica in Harlungenberg, Germany. In 1594, the inhabitants of the El Cisne region had desired their own religious relic, similar to the Virgin of Guadalupe in Mexico City. Representatives of the local people traveled to the capital city Quito, where they requested the sculptor Don Diego de Robles to create the Virgin de El Cisne statue. History tells us that those who had ordered the image couldn't or wouldn't pay the sculptor for it, and he traded it to the "oyacachi" Indians for some large cedar boards he needed.

At a later time, popular fancy enriched the facts with the legend that the Virgin had appeared earlier to the Indians in a cave and had promised to deliver them from the dangerous bears which devoured the children. Our Lady of Quinche is almost entirely "a people's Madonna," a protector of the Indians. The image is a fine carving in cedarwood, measuring 62 centimeters in height. The handsome sculpture is hidden by large brocade garments, covered with jewels and embroidered with gold and silver threads, which only allow the serene dark face to be seen. The Virgin holds a scepter in her right hand and with the left hand she holds the Child, who lifts a hand in blessing and in the other hand displays a gold globe crowned with a cross. The pedestal at her feet and the large half moon, both of pure silver, and the heavy crowns made of gold and precious stones which adorn the heads of Jesus and Mary, evidence the generosity of the people of Ecuador who like to see their patroness resplendent, dressed with the best finery.

The image was crowned in 1943 and her feast is celebrated each year on November 21. The present shrine was declared a National Sanctuary in 1985. Visitors to Nuestra Senora del Quinche are captivated by the unique features of this image. It has an indefinable personal appeal very similar in appearance to the Andean-Indian people. The other Ecuadoran Madonnas are more of the stylized patroness type, austere or elegant in expression. But the Indians speak about the Lady of Quinche as if she were one of the people. When they discuss the various processions they are apt to say: "La pequenita (the Little One) will sleep in Calderon tonight." Or, "the Little One is resting from the heat and fatigue of the journey before she is dressed for the ceremonies in San Domingo." Everybody who visits her, who comes to pray before her, wishes to participate in the most personal manner in the service. The pilgrims buy pieces of cotton on little sticks, sold outside the churches; then the altar boy brushes the blue velvet traveling cloak of the Madonna, which is on the rack in the sanctuary. The stick with the cotton is returned to its owner who cherishes it.

The Virgin of Quinche is credited with many miracles and the Indians ask varied favors through her intercession. But their relations toward her are of an extraordinary intimacy. We have seen many instances of people asking Mary for protection. The Indians of Quinche are no exception, but they in turn display a rare sensitivity of emotion. High in the Andes Mountains, these Indians offer their protection to "the Little One" who is their "delicate beloved." In late November every year, thousands of people walk down the Quito valley to visit the shrine of Our Lady of Quinche. They carry torches or pocket lamps and tell stories of miracle healings. Throughout Ecuador there are many other shrines where people come to pray for a sick person or to give thanks for health and prosperity.

Other pilgrimage shrines in Ecuador are: 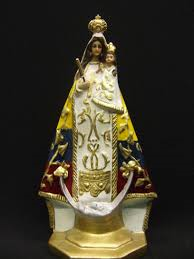