Saint Nicholas was a saint. He was the bishop of a city named Myra, in the Byzantine Empire's Lycia (Turkey) in the early part of the fourth century. St Nicholas was a Christian priest, who later became a bishop. He was a rich person, and traveled the country helping people, giving gifts of money and other presents.

In the Netherlands and northern Belgium he is known as Sint Nicolaas or Sinterklaas. He arrived in the Netherlands by way of steamboat from Spain 2 weeks before his traditional birthday, December 6th, along with his helper, Zwarte Piet (Black Pete), who helped disperse the gifts and candy to all the good children.

The most famous story about Nicholas tells of how he helped three unfortunate young sisters who all had suitors but had no dowries because their father, a poor nobleman, could not raise the money. Because of this, they could not marry.

He is supposed to have died on December 6, 346 at Myra, which is why his feast is celebrated on that date. His relics are believed to be at Bari, Italy. Recognized for his great generosity, he is the patron saint of little children and school children.

This is as much as is generally known about him in the West. 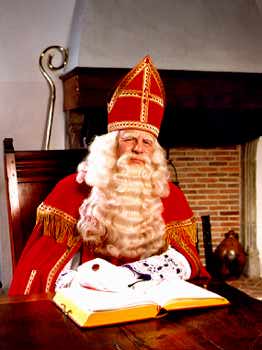 St. Nicholas, patron of children,
may this candycane, shaped like your Bishop's staff,
be a reminder of Advent joy.
Help us prepare for the miracle of the coming of Jesus.
Help us not to be blind to the gifts of getting ready.
Help us be sincere in the greetings we send and receive,
with love and prayer.
Kind St. Nicholas, protect us from shoppers' fatigue,
help us to be kind and generous of heart.
Wherever candy canes are hung, may they bring the bright blessings of God.
Let them be reminders of the joy of sharing and our call to be God's peaceful children as we wait for Jesus.
St. Nicholas, pray for us!
Amen.