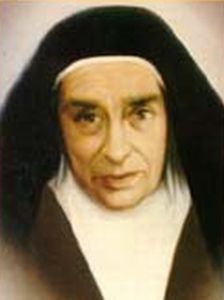 Mother Maravillas of Jesus, uneducated Karmeiletes, was born in Madrid on November 4, 1891. Her mother, who was notable for her charity, her prudence and her vivid intelligence, has great devotion to Our Lady «de las Maravillas» (of the Miracles), Patroness of Cehegín (Southern Spain), from which her family originated. Her father, Marquis of Pidal, is a Spanish ambassador to the Holy See. A committed Christian and thoroughly humble by nature, he puts the eminent moral and intellectual qualities with which God endowed him at the service of religion.

Maravillas loves to hear the stories of saints her maternal grandmother tells her. Already at the age of five, Maravillas, following the example of Saint Agnes who had devoted himself completely to Christ through the vow of chastity, decided to do the same. This «vow» of virginity is the fruit of a special grace from God.

On October 12, 1919, she entered Mount Carmel from the Escorial, Spain. On May 19, 1924, she founded Carmel on Angel Hill (el Cerro de los Angeles). She then founded nine more Carmels, sometimes in the most difficult of circumstances, in Spain and one in India.

Nothing could stop her generosity. Undaunted and confident in God, especially during the revolutionary years in Spain, she worked and prayed for the expansion of God's Kingdom. On December 11, 1974 she died in a fragrance of holiness in Mount Carmel, founded by her, in Aldehuela (Madrid). After her death her body remained smooth and supple. Meanwhile several great favors had been obtained through her intercession; healings, but also spiritual favors.

Her fervent love to God and her union with Him were manifested in a soft and lovable goodness, service and humility. She always considered herself the last and the superior the servant of others. Her being always radiated happiness and peace, the fruit of her loving and total surrender to God.

On May 10, 1998, Pope John Paul II blessed Mother Maravillas de Jesús, who “lived with the spirit of heroic faith, in response to a call to a hard life, putting God at the center of her existence.