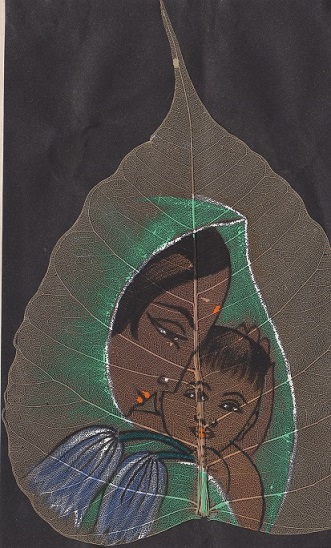 The History of the Apparition:

It was 1958. In the month of January, on 26th, a Friday, a strange star crossed the Sky from West to East. It was seen by many people in the region of Maculuva and in all District of Zavala. The impression left by the star, it was falling in the Indian Ocean, after having caused a great earthquake.

During the time that followed the appearance of the strange star was widely commented in that region.

A week after the vision of the star, also on Friday, February 2nd, 1958 , now in the evening, about 7:30 pm, in the Town of Maculuva, it was manifested the glory of God appearing five figures: Our Lady the Virgin Mary, Mother of Jesus Christ (identified with a baby) and three black angels. The chosen man to witness the apparition was Thaime Chamusse Maculuva , best known by Munjengane.

He was a simple peasant, resident of the village of Maculuva, brother of Chief Lands Maculuve. He devoted to traditional medicine, he did appointment and prescribed traditional medicament. He was married and father of two children: a boy and a girl. Some days before the view in Munjengane, he had quarreled with his wife and she refuged in her parent´s house. On February 2nd, 1958, Munjengane decided to follow his wife to make amends with her .
He got to convince het to come back to their house but she decided to go back the day after, February 3rd.

In these circumstances Munjengane decided to return alone to his house on evening of Febryary 2nd, 1958. It was about 7:30 pm, near his house, about 300 meters from his house. His way was closed and Munjengane met a strange entourage: the Blessed Virgin Mary, identified with a baby, and 3 black angels.
The Blessed Virgin found herself sitting in a kind of mat or a white cloth , between two small trees , locally known as “snow tree”. About 6 meters away, sat in individual chairs: three black angels in a very solemn scene .

When Munjengane saw the scene, felt that the objects linked to his faith healing, hanging on your body, danced and came off his body and then desappeared. Munjengane then asked : "Who are you closing my way to me?" No one answered. He repeated the question two more times, getting no response.Then he decided to do a gentle salute to the entourage corresponded with another salute. Despite the evening, the place was mysteriously lit. Following local customs, he knelt to greet the strange entourage.

Dialogue between Munjengane and the Virgin Mary:

Munjengane: We´re fine. It has happened many strange deaths and this has worried us very much .
Our Lady (played by a Black Angel): Shut up! Can you see us? Do you think we are dead? The deadly are you whose body is different from ours.
And so began the conversation of the centure, perhaps of the millennium, between Our Lady who had spoken in strange language, interpreted to “Chi-Txopi" by one of the Black Angels with the seer Munjengane kneeling as a sign of respect.

The talking between Our Lady, the Virgin Mary and Munjengane summed up as follows:

Our Lady: What admirably thing did you see in this earth?
Munjegane: We saw a star crossing the Sky and it was falling in the water .
Our Lady: That was a sign from heaven advertised this phenomenon. Announced our visit .
Munjengane: It could only be a matter of Heaven .
Our Lady: Did you study?
Munjengane : No, I didn´t study .
Our Lady: Blessed be thou mayest be blessed , blessed be thou , the message that you´ll trust.
Munjengane was silent.
Our Lady: Do you pray?
Munjengane: No, I don´t pray .
Our Lady: You must come here every day, in the morning and in sunset, pray in this place.
Munjengane: How Will I do it, if I don´t know to pray?
Our Lady:We´ll teach you to pray. Your prayer should be this: God in Heaven, the Sovereign Lord on earth. Amen.

Munjengane thanks the lesson, and fell down .
Our Lady : How many kids do you have?
Munjengane: I have 2 children, a boy and a girl, called José Banganhane Taimo Maculuve and Maliane Taimo Maculuve.
Our lady : We are messengers from Heaven and we came to bring an important message. Enough people to be cheated and exploited, God says. The power should no longer be purchased.
Munjengane is silent.
Our Lady : “I order you, Munjengane, you go to te all the authorities, Black and White, what happened. Say you´ve been with us, and tell them the straight message I leave you: “Enough to cheat the people and colonize. The end of colonization and exploitation is near. The power should no longer be purchased and the people should have the right to self determination.”
“This place will be a sanctuary for all races ans all faith. All people must come to pray at this place“.
“This place will be a kind of church of all, all God´s children. Here we strongly call on the name of God and His Son, Jesus of Nazareth, born in Bethlehem, Redeemer of all mankind.”
“This will be the Church of Jesus, the Lord Almighty."
“And I will come to reign over all nations.”

Munjengane humble the weight of responsibility that is given to him and says: ” No one will believe me”.

An Angel gets up and take a leaf of the tree. After the Virgin Mary answered: Who does not believe you, he will disbelieve me. It will be like that leaf. He will be pulled up and die“. Munjengane shudders and says nothing .
Our Lady: Your children, after you, will be witnesses of what happened and the meeting you had with us. And for a testimony, we will write on your back the message to the Government. This writing is undeniable proof that you were with us. But we warn you that we will only be able to decipher the message to such a unique human being. We invite you to take your shirt off .
Munjengane obeys , gets up , take off his shirt and approaches.
A black Angel stood up and wrote on the back of Munjengane the message.
Munjengane later recalled how having felt that Angel wrote two lines.

After the dialogue, a kind of spacecraft came down in that place. Our Lady, the Virgin Mother of Christ, entered it through a staircase. Each of the three angels, in turn, folded his chair and went into the ship. This disappeared and the darkness returned to the place.
It was all finished. In Locality of Maculuva had manifested the glory of God to mankind and a man carrying a written message on the back. This man was Thaime Chamusse Maculuve, later known by Munjengane, a Messenger of God .

The colonial authorities were unable to decipher the message. The man with special powers called by authorities to decipher the message, was a white physician, Portuguese. His name was Acácio Ramos, physician of Zavala and Inharrime, residing in Inhambane.
This message was owned by the colonial authorities, which never disclosed. However, as consequently, and to silence the messenger of God had chosen, arrested him, tortured him and murdered him. The aim of the colonial authorities was silence God and deny his identity to Mozambicans .
And thus the miracle of the Apparition of the Blessed Virgin to this place was never disclosed. The written message by Blessed Virgin remained in the secret of the colonial authorities.
The colonists never thought it could be a Maculuva Shrine equal, or parallel to the apparition of Our lady of Fatima, at the “Cova da Iria”, to the three shepherds, Lúcia, Francisco and Jacinto.

As obvious desire by the Blessed Virgin and 2 black Angels, the place of Her Appearance is a shrine where a community of believers preserves the spirit of worship Heavenly God is Sovereign Lord of the Universe, and by whom all authorities that govern this Country are made. Every year on February 2nd, a huge crowd of believers of different denominations, among national and foreigners from different corners of the world, pilgrim on the spot in the worship of God and in gratitude for de Apparition of the Virgin, praying for you God´s blessings .

Despite the obvious desire for consummation of the Blessed Virgin, the location and the mystery of Her Appearing remain unknown by the authorities since 1975 has been made by God to rule the destinies of Mozambique and its people. Until today, only one Provincial Governor and District Administrator visited the place, both in election times to ask prayers of the local community for the success of FRELIMO Team and its governor.

THE HOLY CHURCH OF GOD, JESUS, JEHOVAH, THE ALMIGHTY SUMMARY OF THE APPEARANCE OF THE MOST HOLY VIRGIN MARY THE MOTHER OF OUR LORD JESUS CHRIST TO THAÍME CHAMUSSE MACULUVA (MUNJENGANE)