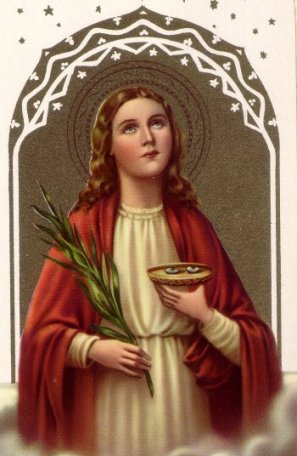 Lucy was born in Syracuse, Sicily, in the year 283, as the daughter of noble and wealthy parents, and was raised a Christian. Her father died while she was a child. She made a secret vow of virginity, but her mother pressed her to marry a pagan. Lucy didn't want to marry at all, and prayed to God for some way to persuade her mother that she didn't have to marry the rich young man.

Lucy's mother became ill, and they both went on a pilgrimage to the tomb of Saint Agatha to pray for healing. When Lucy's mother was miraculously healed, Lucy told her mother about how she had asked God for help so that she wouldn't have to marry. Lucy's mother changed her mind, and told Lucy that she didn't have to marry the rich young man. Lucy was very happy. Like so many of the early martyrs, Lucy had consecrated her virginity to God, and she hoped to devote all her worldly goods to the service of the poor.

But her rejected pagan bridegroom became angry and denounced Lucy as a Christian to the governor of Sicily, who ordered her to burn a sacrifice to the Emperor's image. The guards who came to take her away found her so filled with the Holy Spirit that she was stiff and heavy as a mountain; they could not move her even when they hitched her to a team of oxen. Even with a dagger through her throat she prophesied against her persecutor. As final torture, her eyes were gouged out. She was miraculously still able to see without her eyes. To this day we see pictures of Saint Lucy holding her eyes on a golden plate.

After a long and glorious combat she was finally killed with a sword thrust into her throat, about the year 304. She was honoured at Rome in the sixth century among the most illustrious virgins and martyrs, whose triumphs the church celebrates, as appears from the Sacramentary of Saint Gregory, Bede, and others.

Traditions tell the legend of how there was a great hunger in Syracuse, Sicily, and the town's people had gathered in the cathedral on her feast day, December 13th, to pray, and two ships loaded with wheat arrived, with her at the helm of one, dressed in white, with a halo of candles on her head.

Patroness of the blind and of eye problems.

Prayer to Saint Lucy of Syracuse 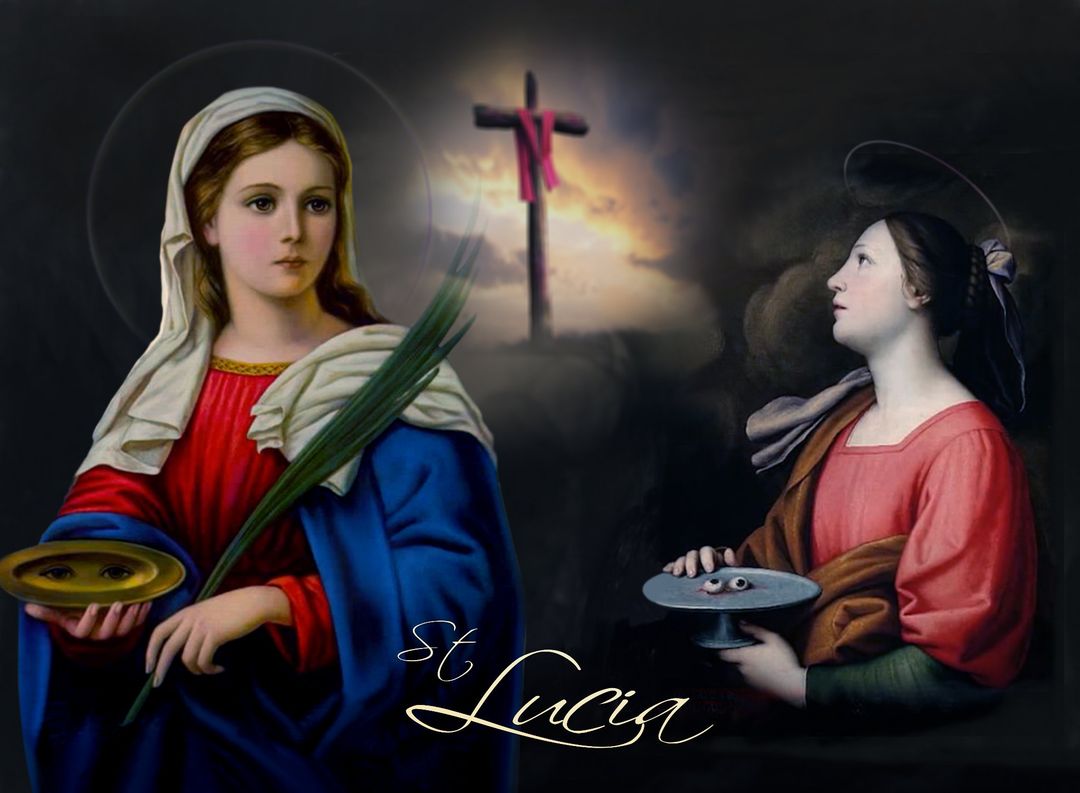 Relying on Your goodness, O God, we humbly ask You, through the intercession of Saint Lucy, Virgin and Martyr, to give perfect vision to our eyes, that they may serve for Your greater honor and glory.
Saint Lucy, hear our prayers and obtain our petitions.
Amen.