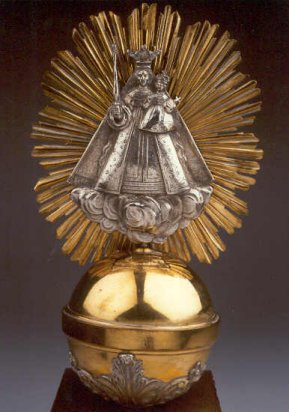 “BUILD ME A CHAPEL ON THIS SPOT”

This was the mysterious and unusual assignment given to the pious travelling salesman, Hendrik Busman, around Christmas time in 1641, more than 300 years ago. On his journey from Weeze to Geldern he stopped at a Cross on the heath of Kevelaer and, as was his custom, prayed there for a few minutes. Today the chapel of Grace stands on that spot. Suddenly he heard a mysterious voice that came from the direction of the cross: “Build Me a Chapel on this spot”. At first he took little notice, (Hendrik was probably a sober and sensible Dutchman), but he heard this mysterious voice on three different days. With the permission and help of the then local Parish Priest of Kevelaer, John Schink, he started promptly with the building of the chapel. Shortly after the Easter of 1642, HENDRIKS WIFE, Mechel Schouse, had a vision one night. She saw a pure white light and a chapel with therein a picture of Our Blessed Lady of Luxemburg.

The story of the vision on this night is supported by a night watchman who had, during his nightly rounds, seen a strange light in the home of the Busmans. This on copper printed picture of Our Blessed Lady of Luxemburg had recently been offered for sale to her, by two Hessische soldiers. She did not buy it as she thought it was too expensive. This for Hendrik was the confirmation of his Heavenly assignment. He sent his wife out to obtain this copper printed portrait, which she, with a lot of difficulty, succeeded in doing so. This was portrait of Our Lady of Luxemburg as she had been portrayed and worshiped during the pest epidemic of 1623, as the “Comforter of the Sad and Distressed”. Hendrik was now really inspired to make sure that the chapel would be build.

On Sunday 1 June 1642 the chapel was finished. Father Johannes Schink placed the portrait, also known as the statue of Grace in the chapel. The portrait is a simple copper impression measuring 7.5 cm x 11cm. The text on the picture says, “A faithful portrayal of the Mother of Jesus, The Comforter of the Sad and Distressed renowned for miracles and worshiped by many people”.
Lots of curious people came on this day. The story of these wonderful events spread like a wild fire throughout the district. Kevelaer became a place of pilgrimage.

On the 8th of September, the feast day of the birth of our Blessed Lady, Reinier and Margaretha van Volbroek ( they lived in Hassum near Kleef) travelled with their sick son Peter on a pilgrimage to Kevelaer. Peter had been paralysed for some five years and could neither walk nor stand. They had done everything in their might to cure Peter’s disease. Finally, as a last resort, they seek their refuge by Our Lady of Kevelaer. Just two days after their visit, Peter is able to walk again without any problems. These wonderful stories increase the interest in Kevelaer The first procession takes place in 1643, when a large group of pilgrims travel on foot all the way from Rees, near Emmerich, to Kevelaer, praying and singing all the way. 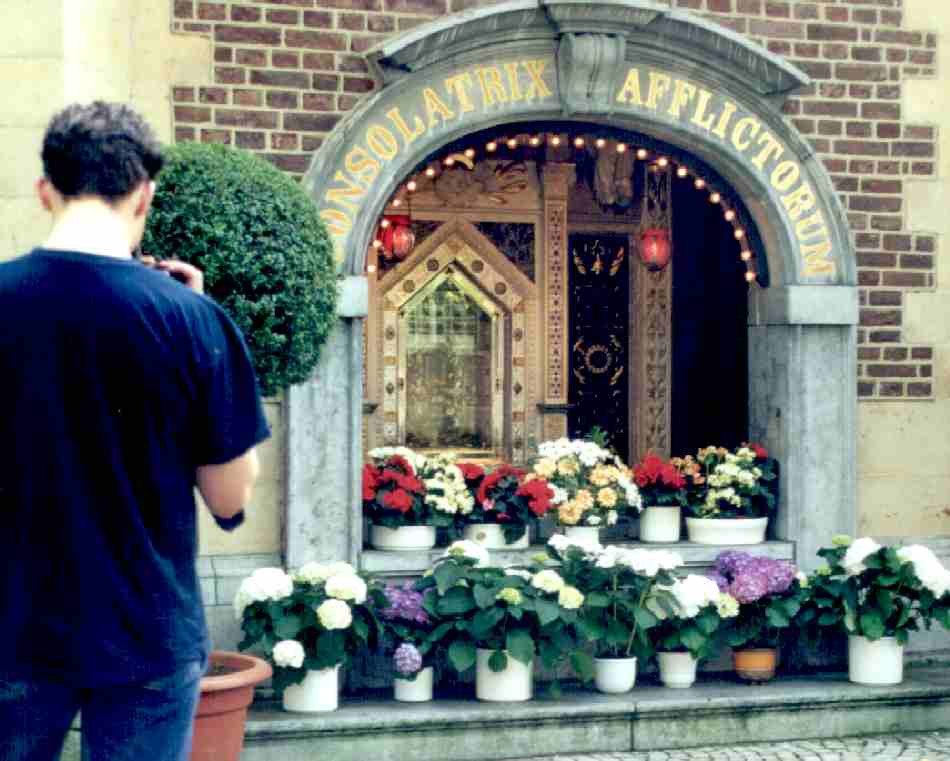 In 1643 we also hear of a miracle from some one from Over-Betuwe. The story is revealed to the Lord Major of Huissen and his Aldermen by Huissen’s Secretary, Lucas Verhoevens who relates the story as follows: Eerutgen Dircks, a single lady living in Huissen, had suffered for years with open wounds on her legs. She had previously visited Miss Walraven Mom. This lady was known for treating such ailments with good results, but to no avail. The stories of the miracles at Kevelaer persuaded her to go there. After just two visits her legs healed miraculously without any medication. This is specially noted by the witnesses, Joffer Mom Toenis int Ros, Gretghen van Montport,and Lysbet en Iennenken int Ros.

Already in 1643, a start was made to build the pilgrimage church, today known as the Chapel of the Candles. Here you can see big candles offered in thanks by different groups of pilgrims. The many family coat of arms, attest to the long tradition of pilgrimages.

In 1654 the simple chapel, built by Hendrik Busman, was replaced by today’s hexagonal shaped chapel, known as the chapel of Grace. On the north side you will find an opening where the statue is visibly from the street during the pilgrimage time. A lamp, located to the left of the altar, contains a dish carried by three doves and contains the light of Peace that was brought to Kevelaer from Lourdes, via Altottin, in 1949. The three doves portray the three places of great grace; Lourdes, Altötting and Kevelaer. A snake stares maliciously at the lamp. This portrayal warns us to continually pray for Peace to Our Lady who crushed the head of the snake. The basilica of Our Blessed Lady was built between 1858 and 1864.

The presbytery, opposite the chapel of Grace, was built by the Oratoren in 1647. In 1889 a start was made with the construction of the Stations of The Cross at the edge of the town. In 1934 a start was made for a large scale renovation. In the newly built Park of Mary, the war memorial of the so called Schutzmantel Madonna was given a fitting place. Today, as in the past, this simple sanctuary of the “Comforter of the Sad and Distressed" in Kevelaer, is the destination for very many pilgrims. They come from far and near; from home and abroad. They seek consolation for their daily sorrows and needs on their long pilgrims’ journey through their earthly life. They will find comfort in Our Mother, who was given to us by The Lord himself.

Prayer to Our Lady of Kevelaer 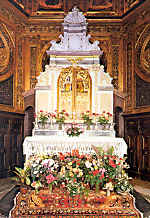 O Lord Jesus Christ. grant that your Mother Mary, Our Lady of Kevelaer and Comforter of the Afflicted. be our intercessor. Grant that through her your blessing may be upon your people who are in need of your help at your chosen place at Kevelaer. Praise be to your Father; let His Kingdom be fulfilled in this country; pour your love into our hearts so as to love all men and place our hope in our Comforter of the Afflicted in all the troubles and dangers of this life. You who lives and reigns for ever and ever.
Amen.