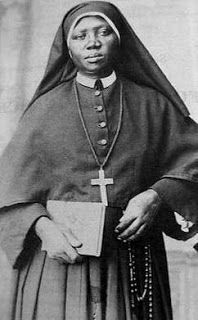 Meaning of the names Josephine and Bakhita

The name Bakhita means: "She who is lucky" or rather "Lucky bird" as explained below in her biography.
The baptismal name Josephine comes from Jozef. And means "God multiplied".

Josephine Bakhita was born in Oglassa (Derfoer, Sudan) in 1868. As a child she witnessed her eldest sister being kidnapped by European slave traders. As a 9-year-old girl, she is kidnapped by slave traders when she is looking for herbs in the forest with an older sister. With an excuse they lure the girl deeper into the forest where the real intentions of the "gentlemen" become clear. Very shocked, she can't even pronounce her name and her kidnappers sarcastically give her the name "Bakhita" which means something like "Lucky Bird". She walks through the jungle for days with a large group of other prisoners.

Later she is proud of that name when she realizes that through her abduction and slave existence she has become acquainted with another world, the world of Christianity where she really feels at home and happy.

Up to five times she is sold on the market as a slave and finally falls into the hands of a Turkish "master". She gets a lot of lashes and is branded and tattooed, while the child gets raw open wounds, which her mistress treats with salt so that the wounds remain open extra long. All that torture leaves her with 144 scars.
But despite everything, Bakhita continues to obey her clients. When she was asked much later why she was so obedient at the time, she replies that it was not because God asked her to because: "After all, I did not know God yet.

After a few years, she joined the consul of Italy, who took her from the market of the Sudanese capital Khartoum. He has ransomed her, but Bakhita does not yet know what being free is. The consulate staff treat her humanely, which takes a lot of time to get used to.
If the political situation in Sudan deteriorates, Italy will recall most of its officials. Bakhita is also taken to that European country and is employed by Augusto Michieli, a close associate of the consul. She has to take care of Minima, the youngest daughter of the family.

When a family friend shows her a silver crucifix, she wants to know more about the man on the cross. Now Bakhita gets to know Him for whom she has been looking for so long. Thus we read in her testimony: "When I used to look at the sun, the moon and the stars, I always wondered who would be the maker and master of these beautiful things. I felt a deep desire to see Him, to know Him. and bring honor. "

On January 9, 1890, after an apprenticeship as a religious student, at the age of 22, she was baptized as Josephine Bakhita.

When the Michieli family has to return to Africa for a longer period of time, they place Bakhita with their daughter with the Sisters of Charity.
When some time later the Michieli family returns from Africa to pick up the remaining housemates, Bakhita asks if she can stay with the sisters. With a heavy heart, the family gives in to its wish.

In 1891 Joséphine entered the monastic order of the Canossian girls in Venice
The sisters use her everywhere, she cooks, sews and embroiders and when the bell of the monastery rings, she is never too tired to open it.
Because of her black skin color she is chosen to come and speak about Africa in the various monasteries and institutes with the aim of promoting missionary work. Those are the toughest assignments for her. But even then she remains cheerful in nature.
Everyone knows her as the laughing sister or "Mother Moretta".
This smile will hold Sister Joséphine all her life. Even if she has a long-term illness with a lot of pain at the end of her life. But when she sleeps, the smile disappears. In her nightmares she relives her slave life. Then the sisters hear her moan, "Please, untie the chains ... they are so heavy."

On February 8, 1947, her ordeal came to an end. The other sisters watch Joséphine start to stare and whisper, "Mary, Mary". Then her face starts to shine, Bakhita is home. For example, Sister Joséphine Bakhita dies in Schio in the diocese of Vicenza

Patron Saint: Bakhita is the patron saint of Sudan.