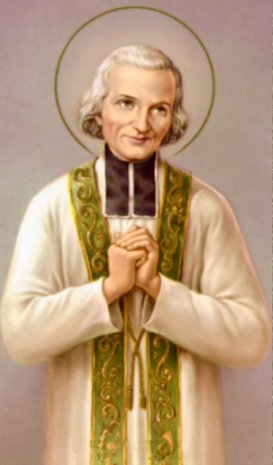 Saint John Baptist Mary Vianney was born in the village of Dardilly in France on 8 May, 1786 as the son of a poor farmer. He had to take his First Communion in secret when he was 13, because the Church was still being persecuted. He worked as a shepherd until the age of 18, when he began training for the priesthood.

John Vianney had a very difficult time. He struggled mightily with all of his studies and he had a particularly difficult time with Latin. He was dismissed from the seminary at Lyons, readmitted, and failed examinations again. Finally, the vicar-general examined John in French and ordained him at the age of 29 in Grenoble in 1815, after eleven years of study. At this age he was older than his professor. Many Catholics of the area were outraged at his ordination, knowing about his less-than-exemplary knowledge, especially of Latin, and passed a petition to have him removed.

But his bishop realized that Vianney had great common sense and was a model of goodness; so he ordained him a priest in 1812. Named assistant pastor to the parish of his first priest-instructor, young Father Vianney soon showed particular gifts, as a confessor. In 1818, John-Mary was named pastor of the run-down rural parish of Ars-en-Dombes, as pastor of Ars. He began visiting his parishioners, especially the sick and poor. Here he was to spend the rest of his days. Saint John Vianney was driven by living for the glory of God, the salvation of his soul and of the souls for whom he was responsible. He burned with love for Jesus and through him Jesus ignited many flames of faith.

John Vianney regularly spent 14 to 18 hours a day in the confessional surviving. He would go two and even three days without eating. When he did eat his meal consisted of boiled potatoes. In this important work he was aided by the spiritual gift of reading peoples' souls. As the word spread his extraordinary abilities as a confessor, thousands, including bishops and aristocracy made the journey to Ars in order to receive his spiritual counsel. He heard confessions of people from all over the world to hear him, enter humbly into the confessional, and obtain miracles. These he attributed to Saint Philomena, whose tomb had recently been discovered, and whom he called his dear little Saint. His life was filled with works of charity and love. It is recorded that even the staunchest of sinners were converted at his mere word. By the year 1855, the Cure' of Ars was hearing as many as 20.000 confessions a year.

With Catherine Lassagne and Benedicta Lardet, he established "The Providence", a home for girls and was the model of similar institutions established later all over France. Only a man of vision could have such trust that God would provide for the spiritual and material needs of all those who came to make La Providence their home.

He had been Parish Priest of Ars for 41 years. But even on his deathbed he was not allowed the solitude which he desired so greatly. People came with rosaries and medals to be blessed, and to be blessed themselves. Unable to speak, John raised his hand and made a feeble sign of the cross. On August 3 he was still alive. At seven o'clock that evening the Bishop of Belley came. John was too ill to speak and could only smile. The Bishop kissed him and went down into the church to pray for him. At two o'clock the next morning, August 4, 1859, John Vianney, Cure of Ars for more than forty-one years, died; he was seventy-three years old.

Miracles continued to be wrought through the intercession of John Vianney after his death. He was canonized May 31, 1925 by Pope Pius XI. To this day his incorrupt body can be seen encased in glass on a marble Altar in Ars, France.

Pope Benedict XVI has declared a “Year for Priests” beginning with the Solemnity of the Sacred Heart of Jesus on June 19, 2009. The year will conclude in Rome with an international gathering of priests with the Holy Father on June 19, 2010. With the announcement of this Year for Priests, the Pope has declared St. John Vianney the Universal Patron of Priests on the occasion of the 150th anniversary of the death of the Curé d’Ars.

Patron of: Parish Priests throughout the world. 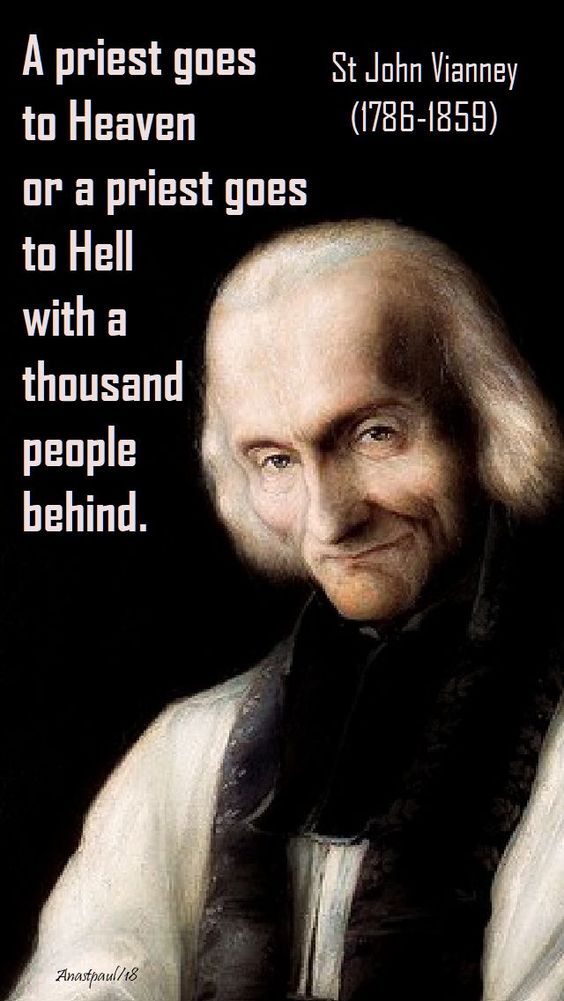 Almighty and merciful God, in Saint John Vianney You have given us a Priest who was outstanding in pastoral zeal. Through his intercession help us to win men for Christ and together with them attain eternal glory.
Amen. 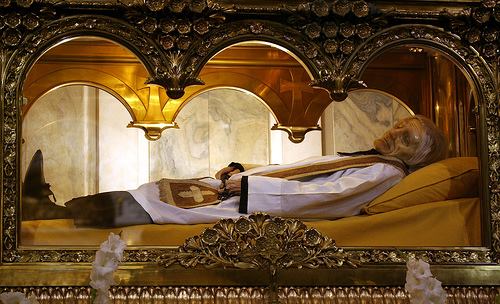