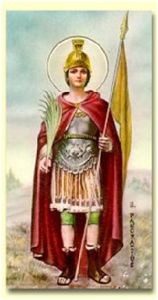 The “Ice Saints” refer to a period in May when, according to popular farmers’ lore, the weather is still too unstable to plant crops because of the danger of frost.

The Ice Saints are:

He was well-educated, and probably born to the Gallic nobility. May have been married at one point. Archbishop of Vienne, France in 461. Known for his secular and theological learning, and for bringing back the faith to an indifferent region.

Saint Pancratius was a fourteen-year-old orphan, brought to Rome by his uncle, Saint Dionysius. Pancras was beheaded beheaded for his faith at the age of fourteen, around the year 304.

Saint Servatius of Maastricht (May 13):

The history of the basilica of Saint Servatius, built over the graveof Maastricht's first bishop (who died in 384), is lost in the hazeof the past.
History is sparse with established facts about Servatius. The only thingthat is certain is that he was present at the synod of Sardica (Sofia)in 343 and Rimini in 359.

Saint Bonifatius of Tarsus (May 14):

The Holy Martyr Boniface was the slave of a rich young Roman woman named Aglaida and he dwelt with her in an iniquitous cohabitation. He was beheaded c.307 in Tarsus, Cilicia (in modern Turkey)

Saint Sophia of Rome is venerated as a Christian martyr. She is identified in hagiographical tradition with the figure of Sophia of Milan, the mother of Saints Faith, Hope and Charity, whose veneration is attested for the 6th century.