Green Scapular of the Immaculate Heart of Mary 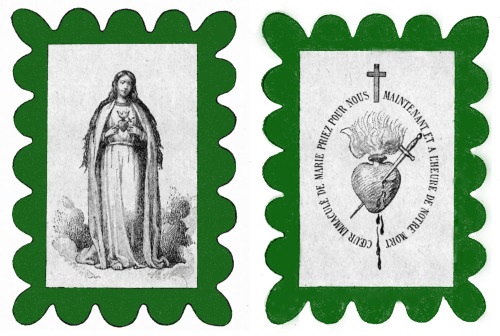 Feastday of Our Lady of the Green Scapular - January 28:

The devotional scapular is made of green fabric. The front has an image of the burning heart of Mary (without the wreath of roses) pierced by a sword and dripping blood, above which is a crux immissa, encircled by the words: "Immaculate Heart of Mary, pray for us now and at our hour of death." The reverse shows a full standing image of the Blessed Virgin Mary with the radiant Immaculate Heart.

Justine Bisqueyburu was born in 1817 in Mauléon, France. On January 28, 1840, during her retreat in preparation for entrance into the Daughters of Charity, Justine was in the chapel at Rue du Bac in Paris. While she was at prayer Our Lady appeared to her, dressed in a long white gown and a light blue mantle; her hair was not covered. Our Lady said nothing. At the end of the retreat Our Lady appeared to Sr Justine again and the vision recurred five times during her novitiate. On each occasion, the vision was identical to the first; on each occasion, Our Lady said nothing.

On September 8, 1840, the feast of the Nativity of the Blessed Virgin Mary, shortly after she had received the habit of the Daughters of Charity, Sr Justine was sent to teach the poor in Blangy. While she was prayer, Our Lady again appeared to her. This time Mary held in her right hand her heart surrounded by flames, and in her left, a type of scapular, a single piece of green cloth strung on green cords. On it was an image of the Blessed Mother as she had appeared to Sr Justine, holding her Immaculate Heart in her right hand. On the cloth's reverse was "a Heart all ablaze with rays more dazzling than the sun and as transparent as crystal". The heart was pierced by a sword, surmounted by a gold cross and with words in the shape of an oval around the heart: Immaculate Heart of Mary, pray for us now and at the hour of our death. Sr Justine heard by an interior voice say that Our Lady wished the scapular to be promoted widely as an instrument in the conversion of souls.

Sr. Justine told her superior about the visions and, subsequently, her spiritual director, Jean-Marie Aladel, C.M.. The Green Scapular was approved by Pope Pius IX in 1870. Sister Justine went on to serve in Constantinople, Paris, Algiers and Carcassone. To the end of her life Sister Justine maintained silence about these visions; she spoke only with her superior and her spiritual director about these.

Since it is not the emblem of a confraternity but simply a double image attached to a single piece of cloth, no investiture is necessary. The only requirement is that the Green Scapular be blessed by a priest and worn or carried by the person wishing to benefit by it.

The scapular may be worn about the neck, or hung in a person's room, or placed under the pillow, or kept in a wallet, or placed in their clothing. The prayer, "Immaculate Heart of Mary, pray for us now and at the hour of our death", should be prayed at least daily.

When invoked under this title and through this holy image Our Lady is said to obtain great favors from her Divine Son, especially in the areas of physical health, peace of mind and spiritual conversion. She who is the Refuge of Sinners would particularly obtain the conversion of those who had fallen away from the faith, and those who had no faith.