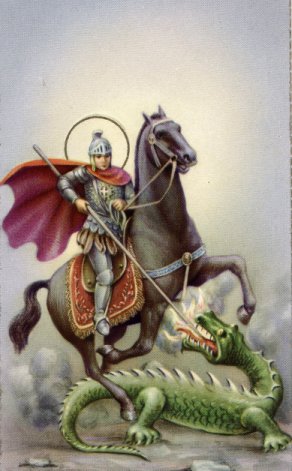 There is almost not much known of the early years of Saint George's life. George was born in Cappadocia, Turkey sometime in the year AD 275 to a Christian family. His father served as an officer of the army. His mother was from Lydda, Palestine.

At the age of seventeen he joined the Roman army and soon became renowned for his bravery. He served under a pagan Emperor but never forgot his Christian faith.
The Emperor Diocletian gave him many important missions, and it is thought that on one of these he came to England. It was while he was in England that he heard the Emperor was putting all Christians to death and so he returned to Rome to help his brother Christians. He pleaded with the Emperor to spare their lives. Diocletian did all he could to persuade St. George to give up his faith. When he refused, George was arrested, tortured, and finally put to death on April 23, 303 AD. This day is now known as Saint George's Day.

The banner of St George

The banner of St George, the red cross of a martyr on a white background, was adopted for the uniform of English soldiers possibly in the reign of Richard 1, and later became the flag of England and the White Ensign of the Royal Navy.

The knights of the Round Table had as their patron saint St. George, because he was the only one of all the saints who was a horseman.

The Legend of Saint George

Several stories have been attached to Saint George, the best known of which is the Golden Legend. A dragon living in a in a lake near Silena, Libya, was devouring people of the surrounding region and was about to eat the king's daughter, when George intervened and subdued the dragon. The princess tied her belt around the dragon's neck and led it back to the city, where George killed it with a single blow with his lance. Then the king and all his people, twenty thousand men, without counting women and children, were baptized, and George smote off the head of the monster.

Prayer in honor of Saint George 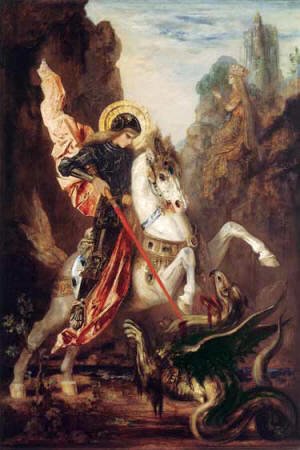 O God, who didst grant to Saint George strength and constancy in the various torments which he sustained for our holy faith; we beseech Thee to preserve, through his intercession, our faith from wavering and doubt, so that we may serve Thee with a sincere heart faithfully unto death. Through Christ our Lord.
Amen.

Novena in honor of Saint George

Almighty and eternal God! With lively faith and reverently worshiping Thy divine Majesty, I prostrate myself before Thee and invoke with filial trust Thy supreme bounty and mercy. Illumine the darkness of my intellect with a ray of Thy heavenly light and inflame my heart with the fire of Thy divine love, that I may contemplate the great virtues and merits of the saint in whose honor I make this novena, and following his example imitate, like him, the life of Thy divine Son.

Moreover, I beseech Thee to grant graciously, through the merits and intercession of this powerful Helper, the petition which through him I humbly place before Thee, devoutly saving, "Thy will be done on earth as it is in heaven." Vouchsafe graciously to hear it, if it redounds to Thy greater glory and to the salvation of my soul. Amen.

PRAYER IN HONOR OF SAINT GEORGE

O GOD, who didst grant to Saint George strength and constancy in the various torments which he sustained for our holy faith; we beseech Thee to preserve, through his intercession, our faith from wavering and doubt, so that we may serve Thee with a sincere heart faithfully unto death. Through Christ our Lord. Amen.

Faithful servant of God and invincible martyr, Saint George; favored by God with the gift of faith, and inflamed with an ardent love of Christ, thou didst fight valiantly against the dragon of pride, falsehood, and deceit. Neither pain nor torture, sword nor death could part thee from the love of Christ. I fervently implore thee for the sake of this love to help me by thy intercession to overcome the temptations that surround me, and to bear bravely the trials that oppress me, so that I may patiently carry the cross which is placed upon me; and let neither distress nor difficulties separate me from the love of Our Lord Jesus Christ. Valiant champion of the Faith, assist me in the combat against evil, that I may win the crown promised to them that persevere unto the end.

My LORD and my God! I offer up to Thee my petition in union with the bitter passion and death of Jesus Christ, Thy Son, together with the merits of His immaculate and blessed Mother, Mary ever virgin, and of all the saints, particularly with those of the holy Helper in whose honor I make this novena.

Look down upon me, merciful Lord! Grant me Thy grace and Thy love, and graciously hear my prayer.
Amen.