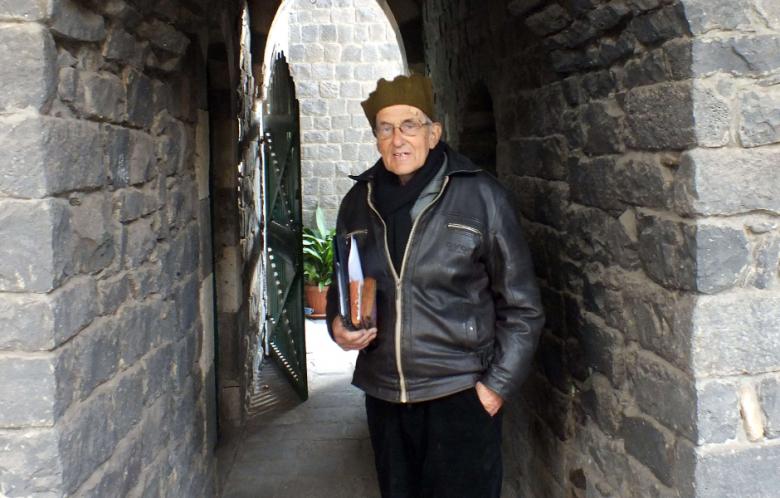 Dutch Jesuit priest Frans van der Lugt, known as Pater Frans, who became famous for insisting on staying in Syria's besieged city of Homs. He was shot dead on Monday April 7, 2014 by a masked gunman.

Van der Lugt was born into a banker's family and grew up in Amsterdam. His father was Godefridus Wilhelmus Antonius van der Lugt, president of the Nederlandsche Landbouwbank. His brother Godfried van der Lugt became a top executive with the Postbank and later the ING Group. He studied as a psychotherapist but left the Netherlands for the Middle East back in the 1960s, where he joined the Jesuits. In 1966, after studying Arabic for two years in Lebanon, he went to Syria, where he lived for nearly fifty years.

We are faced with many problems as Christians and Muslims are going through a difficult time. The greatest is hunger. People have nothing to eat. There is nothing more painful than watching mothers searching for food for their children. I will not accept that we die of hunger. We love life, we want to live. And we do not want to sink in a sea of pain and suffering.

In 1980 Pater Frans der Lugt started Al-Ard, a community center and farm, just outside the city of Homs; the work there was done by "young people with mental health problems". He spent his last years in Homs, where he worked in the local monastery and cared for the sick and the hungry. He gained international exposure at the beginning of 2014 when he made a number of YouTube videos, asking the international community for help for the citizens of the besieged city. He refused to leave, despite the dangerous situation. In February, The Economist reported that he was probably the last European in the city and stayed because he was "the shepherd of his flock": He declined being evacuated during a UN operation in 2014 that saved 1400 people from the besieged city.

Frans der Lugt was known for helping Christians and Muslims alike; the Al-Ard Center aimed to foster dialog between people of different faiths. In an interview in 2012, he explained how they held a church service after a bombardment; by this time, he said, all the Catholics had left, leaving only Orthodox Christians and Muslims to celebrate Palm Sunday in his church. The imam produced a wonderful sermon, Van der Lugt recollected. He was immediately cleansed of his dogmatic tendencies, to the extent that I ever had those.

He was shot around 09:30 AM on Monday, 7 April 2014, aged 75. According to the governor of Homs Governorate, Talal al-Barazi, he was murdered by extremists from the Al-Nusra Front. He was the second foreign-born Jesuit in that area to fall victim to the Syrian civil war: Paolo Dall'Oglio was kidnapped in 2013. A Vatican spokesperson expressed 'great pain' over his death, according to the BBC, and the Dutch foreign minister Frans Timmermans called his murder "cowardly".

In an appeal to end violence in Homs and the rest of Syria, Pope Francis remembered Father van der Lugt:

"Last Monday in Homs, Syria, the Rev. Fr. Frans van der Lugt was assassinated, a Dutch Jesuit brother of mine, 75 years old, who arrived in Syria about 50 years ago; he always did good to all, with gratitude and love, and therefore he was loved and respected by Christians and Muslims. His brutal murder has filled me with deep pain and it made me think of a lot of people still suffering and dying in that tormented country, my beloved Syria, already too long in the throes of a bloody conflict, which continues to reap death and destruction. I also think of the many people abducted, both Christians and Muslims, in Syria and in other countries as well, among which are bishops and priests."