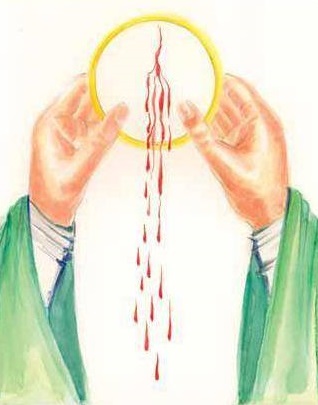 What are Eucharistic Miracles? Throughout the history of the Catholic Church, Jesus has proven beyond any doubt that He is truly present in the Holy Eucharist. Why did He have to prove this to us? It is because at certain times in history, there were heresies that denied the Real Presence in the Sacrament of the Holy Eucharist.

In 1222 and 1465, two important Eucharistic miracles took place in the town of Meerssen. The first occurred during Holy Mass, when living Blood dripped from the large Host and stained the corporal. The second occurred in 1465.

With the help of Gerberga of Saxony, wife of the French King Louis IV of Outremer, the ancient chapel was enlarged in the mid tenth century and became an important church. In 1222 an important Eucharistic miracle occurred in this church and was recognized by the ecclesiastical authorities. During the celebration of Sunday Mass, the priest consecrated the Eucharistic species, and living Blood started to drip from the large Host, staining the Mass corporal.

In 1465 a huge fire broke out and destroyed the church, but a farmer managed to rescue the relic of the Blood-stained Host, which remained completely unharmed. The townspeople remember this episode as the “Miracle of the Fire.” Despite the fire, the church was immediately rebuilt, and in 1938 Pius XI raised it to a minor basilica. Today it is still a major pilgrimage center in the Netherlands, and the precious relic of the miracle is carried in procession each year on the octave of Corpus Christi.