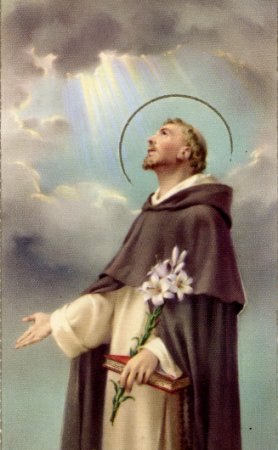 Dominic de Guzmán was born around 1170 in the little village of Caleruega, in Old Castle, Spain. His father, Don Felix de Guzmán, held the post of royal warden of the village; his mother, a woman of unusual sanctity, was to become Blessed Joan of Aza. A legend stated that before his birth, his mother dreamed she saw her son under the figure of a black-and-white dog, with a torch in its mouth. This legend seems to use the medieval pun on the name of the Dominicans, Domini canes, "dogs of the Lord". At his baptism, his mother saw a star shining from his chest, which became another of his symbols in art, and led to his patronage of astronomy.

When Dominic was born, two of his older brothers were already studying for the priesthood. He would follow their path. In 1184 Saint Dominic entered the University of Palencia. Here he remained for ten years prosecuting his studies with such ardour and success that throughout the ephemeral existence of that institution he was held up to the admiration of its scholars as all that a student should be. As a student, he sold his books to feed the poor during a famine, and offered himself to ransom a slave. At the age of twenty-five, after taking the religious habit he became acting Superior of the Canons Regular of Saint Augustine in Osma in 1199, and was soon offered an episcopal chair at Compostella.

In 1215 he founded the Order of Friars Preachers, or more popularly known as the Dominican Order and an order of nuns dedicated to the care of young girls. Like the Franciscans, the Dominicans went directly the people to spread the word of God. They were both mendicant orders, which means that they were supported by donations. Dominic now made his headquarters at Rome, although he traveled extensively in the interests of his growing brotherhood of monks. He was made Master of the Sacred Palace, who functions as the personal theologian to the popes. It has ever since been occupied by members of the Dominican Order.

It was during this time that the tradition of the Rosary comes to us. Dominic received a vision from Our Lady who showed him a wreath of roses, and told him to say the rosary daily, and teach it to all who would listen. Eventually the true Faith won out. Dominic is often credited with the invention of the rosary, but it predates him. He is also reported to have raised four people from the dead.

Dominic spent the last years of this life organizing the order, traveling all over Italy, Spain and France preaching and attracting new members and establishing new houses. The new order was phenomenally successful in conversion work as it applied Dominic's concept of harmonizing the intellectual life with popular needs. He convoked the first general council of the order at Bologna in 1220 and died there the following year on August 6, 1221, after being forced by illness to return from a preaching tour in Hungary.

On his deathbed he gave his brothers his last will and testament: "Have charity, guard humility, hold fast to voluntary poverty." He promised them that he would continue to guide them in spirit - a promise which he has kept. He was buried, according to his wishes, "under the feet of his brethren." Saint Dominic was canonized July 3, 1234 by Pope Gregory IX at Rieti, Italy. In its first 100 years, the Order grew to 30.000 members from across Europe.

Patron Saint of: astronomers and the Dominican Republic 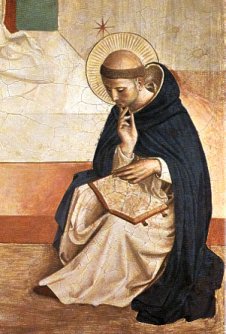 Wonderful Saintly Founder of the eloquent Order of Preachers and friend of Saint Francis of Assisi, you were a fiery defender of the Faith and a fighter against the darkness of heresy. You resembled a great star that shone close to the world and pointed to the Light which was Christ. Help astronomers to study the stars and admire their wonderful Maker, proclaiming: "Give glory to God in the highest."
Amen.