Our Lady of China 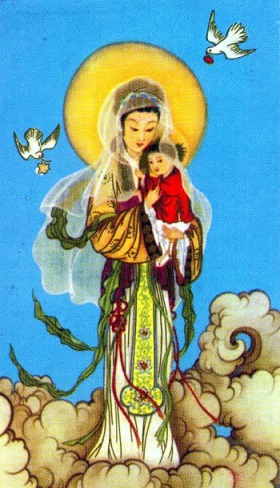 Our Lady of China is the name given to an apparition of the Blessed Virgin Mary in Donglu, China, first appearing in 1900.

When the Boxer Rebellion broke out, nearly 10,000 hostile soldiers attacked the small impoverished mission village of Dong Lu (near Peiping), home of 700 - 1,000 Christians and founded by Vicentian fathers. The Virgin Mary appeared as a beautiful lady in white in the sky surrounded by light. The soldiers, in senseless rage, started to shoot into the sky. Then suddenly they fled, frightened, and never came back again when a fiery horsemen - perhaps St. Michael - chased the attackers out of the village. The Chinese pastor of the village, Father Wu, had prayed for Our Lady's intercession.

The mother of Christ appeared in China showing herself as the protector and defender for helpless and the righteous. The significance of this apparition is just being realized now… as China begins to take center stage in the Global World and Economy.

Mary hopes for a China that could become a shiny beacon of light, a nation where the family is valued, where all Life is protected and the Chinese people have the right to freely worship the great God Almighty. China could become the hope of the world.

Prayer to Our Lady of China 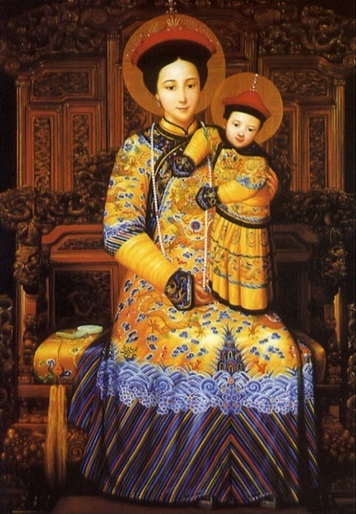 Our Lady of China, pray for us. Pray for the Church in China. In Chinese culture, yellow is an imperial color, at one time worn only by emperors and empresses. Our Lady is Queen of Heaven, and her son is Christ the King.
Amen.