Also known as Catharine of Siena

Catherine Benincasa was born in Siëna, Italy, March 25, 1347, in Florence, Italy. She was the 25th of the 26 children of Jacopo Benincasa, a wool-dyer, and Lapa Piagenti. She began to have mystical experiences when she could see guardian angels as clearly as she could see the people they were protecting as she was a little girl. Beginning when she was only about six years old, Catherine loved to go out to quiet places to pray and talk to God. She experienced a vision of Our Lord near the church of the Friar Preachers in the Valle Piatta. In the vision, Our Lord was clothed in pontifical garb with a tiara on top of his head and sat upon a throne surrounded by Saints Peter, Paul and John the Evangelist. When only seven years old she made a vow of virginity. When she was 15, she refused her parents' plan for her marriage. At the age of sixteen Catherine gained admittance to the Third Order of St. Dominic, the Mantellate, women who were affiliated with the Order of St. Dominic and wore the habit but lived in their own homes, serving the needs of the poor and sick under the direction of a prioress and ultimately under the direction of the friars. Thenceforward for three years she never left her room, except to go to mass and confession, and spoke to no one except her confessor and never went out except to the neighboring church of St. Dominic, where the pillar against which she used to lean is still pointed out to visitors.

On Shrove Tuesday, 1366, while the citizens of Siena were keeping carnival, and Catherine was praying in her room, a vision, what she described in her letters as a 'Mystical Marriage' with Jesus Christ. Jesus appeared, accompanied by His mother and the heavenly host. Taking the girl's hand, Our Lady held it up to Christ, who placed a ring upon it and espoused her to Himself, bidding her to be of good courage, for now she was armed with a faith that could overcome all temptations.She rejoined the world, and began to serve Christ in the sick, poor and ignorant. Many people were attracted to her by her charm, calm and wisdom. She served the poor, sick and to pray for the conversion of sinners. She still spend much time in prayer. Despite persecutions by the local clergy and others, she began to gather disciples. During the summer of 1370 she received a series of special manifestations of Divine mysteries, which culminated in a prolonged trance, a kind of mystical death, in which she had a vision of Hell, Purgatory, and Heaven, and heard a Divine command to leave her cell and enter the public life of the world.

She began to dispatch letters to men and women in every condition of life. Her assertive and confrontational letters to bishops and popes as well as her commitment to direct service to the sick and the poor have made Catherine a role model for a more worldly and active spirituality. Between 1374 and 1378, Catherine was called upon to exercise a broad influence in public affairs. The Republic of Florence, at odds with Pope Gregory XI, sent her to visit the Pope at Avignon, France, to make peace between Florence and the papal states. She failed in that task, but she was more successful in urging the Pope, who, like several of his predecessors had been living in France, to return to his proper residence, Rome. It was during these years that she achieved her widest influence. She had a detailed correspondence with Pope Gregory XI, also asking him to reform the clergy and the administration of the Papal States. 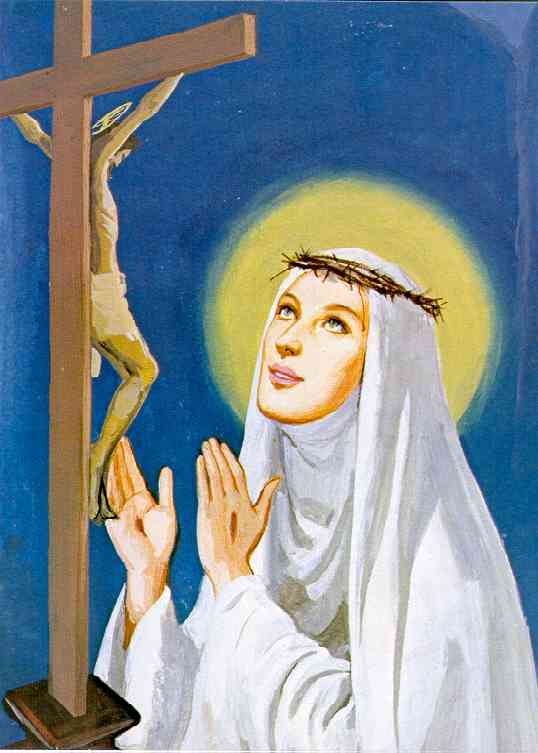 While at Pisa in 1375 she received the Stigmata, five mystical wounds deeply engraved in her hands, feet and heart, but she prayed that they might be concealed from human eyes. In June of 1376 she went to Avignon herself as ambassador of Florence to make peace with the Papal States, but was unsuccessful. She impressed the Pope so much, however, that he returned his administration to Rome in January of 1377. The year 1377 was mostly spent in the work of reforming the country districts around Siena, and it was about this time that Catherine miraculously learned to write. Need we be surprised that the works of Catherine of Siena rank among the classics of the fourteenth century. No one has ever questioned the beauty of the Tuscan style in the “Dialogues,” the “Prayers” or the collection of nearly four hundred letters still extant. In the Great Schism of 1378 she was an adherent of Pope Urban VI, who summoned her to Rome where she lived until her death in 1380. The accounts of her life collected by her followers were used in a biography by her confessor, Fra Raimondo da Capua (1398). Her letters are considered one of the great works of early Tuscan literature.

Catherine died on April 29th in 1380 of a mysterious and painful illness that came on without notice, and was never properly diagnosed. She was Thirty-three years old. About fifty years after she died, her body was found to be incorrupt. Pope Pius II canonized Catherine in 1461. Her feast day is 29 April. In 1866 she became co-patron saint of Rome. Since 1939 she is the patron saint of Italy together with Francis of Assisi. Of all the spiritual stars, Catherine of Siena is one of the very greatest. Catherine was declared a Doctor of the Church on October 4, 1970 by pope Paul VI. Further she got the title co-patronship of Europe by John Paul II in 1999.

- Catherine of Siena
- Teresa of Avila
- Thérèse of Lisieux

Novena Prayer in Honor of St. Catherine of Sienna 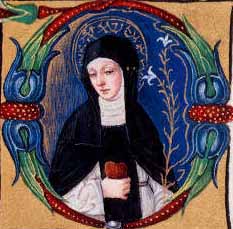 Heavenly Father, Your glory is in Your saints.
We praise Your glory in the life of the admirable St. Catherine of Sienna, virgin and doctor of the Church. Her whole life was a noble sacrifice inspired by an ardent love of Jesus, Your unblemished Lamb.
In troubled times she strenuously upheld the rights of His beloved spouse, The Church.
Father, honour her merits and hear her prayers for each of us, and for our whole parish family dedicated to her.
Help us to pass unscathed through the corruption of this world, and to remain unshakably faithful to the church in word, deed, and example.
Help us always to see in the Vicar of Christ an anchor in the storms of life, and a beacon of light to the harbour of Your Love, in this dark night of Your times and men's souls.
Grant also to each of us our special petition . . . (pause to pray for your own intentions).
We ask this through Jesus, Your Son, in the bond of the Holy Spirit.
Amen.

O My Savior, Saint Catherine took her faith out into the world to make a difference for Your Kingdom. She served as a spiritual guide to many, she affected politics, and she convinced the pope to return the Church's leadership to Rome. By word and deed, she taught that Christians should influence the world with their spiritual values. I ask her to pray for me, that I will recognize the opportunities around me in which I can assert my Christian Faith to help shape society. Lord, fill me with a desire to get involved in the world's affairs, and show me how to do it well. Saint Catherine, pray for me.
Amen.