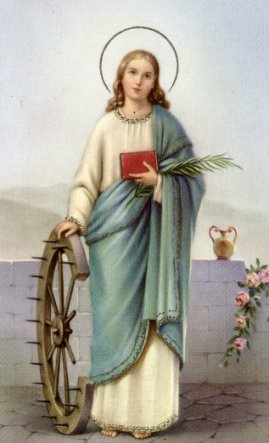 Saint Catherine of Alexandria was born around 287 in Alexandria, Egypt. At that time, Alexandria was one of the finest cities in the world, and a center of learning and culture as well as faith.

Christian tradition states she was of noble birth, possibly a princess. As a member of the nobility, she was also educated and was an avid scholar. Around the age of fourteen, she experienced a moving vision of Mary and the infant Jesus, and she decided to become a Christian.

During her subsequent torture, she professed that she had consecrated her virginity to Jesus Christ, her spouse, and was sentenced to death. The spiked wheel by which she was to be killed broke when she touched it (whence the term Catherine wheel), and she was then beheaded.

After her death, angels allegedly took her body to Mount Sinai, where, according to legend, it was discovered about 800 ce. In the Middle Ages, when the story of her mystical marriage to Christ was widely circulated, she was one of the most popular saints and one of the most important virgin martyrs. St. Joan of Arc claimed that Catherine’s was among the heavenly voices that spoke to her.

She is the patron of philosophers and scholars and is believed to help protect against sudden death.

A tradition dating to about 800 states that angels carried her corpse to Mount Sinai, where, in the 6th century, the Eastern Emperor Justinian had established what is now Saint Catherine's Monastery in Egypt (which is in fact dedicated to the Transfiguration). The main church was built between 548 and 565, and the monastery became a major pilgrimage site for devotees of Catherine and the other relics and sacred sites there. Saint Catherine's Monastery survives, and is a famous repository of early Christian art, architecture and illuminated manuscripts that remains open to tourists and visiting scholars.