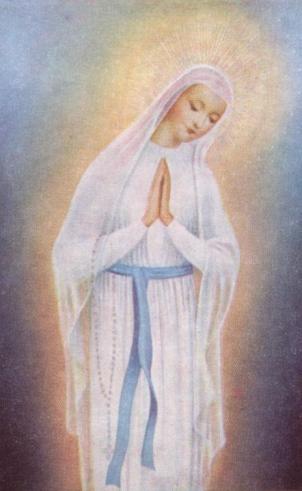 I am the Virgin of the Poor

In 1933 the Blessed Virgin Mary chose one 11 year old child in Banneux to be Her instrument. Mariette Beco was born in Banneux on the 25th March, 1921 and was the eldest of a family of seven children. Her family who was quite poor. Their home was just over a mile from the church, which was in a swampy area. Just on the other side of the road the large pine forests start, which continue until they reach the Eifel.

There is snow on the ground and Mariette Beco is sitting at the kitchen window looking out onto the small garden. It is seven p.m. and she is looking for her brother Julien who should have been home a lot earlier. Whilst so doing, she is also looking after the baby in its cradle. Theirs is a Catholic family, although they never go to church or pray; in spite of which Mariet has religious tendencies. She once found a rosary on her way to Tancremont and always carries it with her. While she sat staring into the darkness, she suddenly, saw just a few meters away from her a young lady who seemed to be all light and was very beautiful. She called out: "look mother it is Our Blessed Lady, She is smiling at me". Immediately she took out her rosary and started to pray, continuing to stare at the apparition. The Lady made it very clear that She wanted Mariet to go to her and Mariet stood up to go outside, but her mother who has not seen anything and suspects that it is a witch. Prevents Mariet from opening the door and in fact, puts the lock on firmly. Mariet returns to the window, but the Lady has disappeared.

In the evening Mariette Beco manages to go into the garden. Despite her fears of dark she goes outside into the front garden and starts to pray her rosary, kneeling down in the dark. She suddenly stretches out her arms and Our Blessed Virgin Mary appears in the distance, looking very small above the woods. A few metres away from the Lady, she stands still praying and she sees Our Lady who appears to be praying, gently moving Her lips silently. This lasts for about 20 minutes. Then Mary motions her to follow Her. Mariette Beco does this and comes out onto the main road. Obeying Our Blessed Virgin, Mariette Beco kneels down three times on this road and prays for a few moments. Thus they arrive at a small stream that was running slowly out of the high road side. Our Blessed Lady stands above the edge of the road and Mariette kneels down beside it. Mary said: "Stretch out your hands into the water". Mariet does this very carefully puts her hands into the water, then Our Blessed Lady said; "This stream is especially for me." She then said farewell to Mariette Beco with the following words; "Good night and we'll meet again". Whilst She was elevated, Her face remained turned toward the child.

On this day Mariet, with her father's old overcoat over her head to protect her from the severe cold, went outside. She knelt down having walked a few paces through the snow, to pray. Her father was with her in the garden. After a couple of minutes, she stretched out her hands and cried out; "There She is !!" All remained silent until Mariette Beco said: " Who are you beautiful lady?" Our Blessed Virgin answered her by saying:

I AM THE VIRGIN OF THE POOR 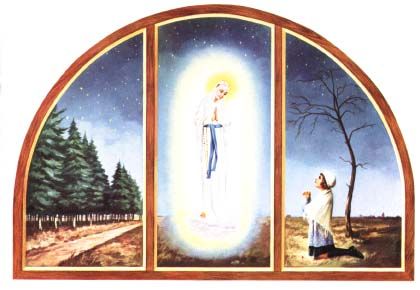 Our Blessed Virgin led her along the same path as the on the previous occasion to the stream. Mariette Beco said; "last evening you said; 'this stream is especially devoted to Me, why devoted to me?" Whilst saying this she pointed towards herself. The Blessed Virgin smiled and said: "This stream is for all nations…for the sick!". Mariette Beco repeated these words with a very clear voice and spontaneously, said:" Thank you! Thank You!!" Then Mary said: "I shall pray for you, goodbye for now".

Mariet is not very well, but this does not prevent her from going outside at 7 p.m. She commences to pray the rosary and after a few moments calls out: "there She is" she then says; "beautiful Lady, what are Your wishes?" and Our Blessed Virgin answered: "I would like a small chapel built" Mary then spread out Her arms horizontally without moving them from Her chest, and with Her right hand She made the sign of the cross by way of a blessing over Mariette for this task. Due to sickness and cold Mariette Beco lost consciousness. Her father and their neighbour carried Mariette Beco inside where she quickly regained consciousness and went to sleep peacefully.

From the 21st of January until the 11th of February Mariet continued to pray her rosary in the garden each evening, despite the cold. Our Blessed Lady did not appear and Mariette Beco is the only person who continues to believe in Our Lady of the Poor who she so much wants to see again.

Mariet Beco was on the road with a few other people. It is not until near the end of the second rosary that the people see her stand up and kneel down at the familiar place and thus reaching the stream. She dipped her hands into the water and made the sign of the cross. Then Our Blessed Lady said: "I have come to relief the suffering, I shall see you again soon". Then Our Lady disappeared as usual above the pine trees. Mariet stood up, ran towards the house and wept. She did not understand what the Virgin had told her. "I come to relieve suffering." She did not understand the meaning of the words "to relieve."

The Blessed Virgin appeared for the sixth time in Banneux. Mariet is delighted and says: "The Chaplain has instructed me to ask You for a sign". To which Mary answered: "Have Faith in Me: I shall believe in you". She then entrusted Mariette Beco with a secret. Finally She said: "Pray a lot, goodbye for now". After this even the Chaplain has to 'believe'. The older and more important people become, the more difficult it seems to become to simply believe!!

It was bitterly cold; even so Our Blessed Lady appeared at the end of the second rosary. She led Mariet to the stream and smiling sweetly, She said to Mariet: "My beloved child pray a lot" Then very seriously, She said. "Goodbye for now." Mariet now has to wait until the second of March before Our Blessed Lady appears during the third rosary for the eighth and last time. Our Lady is very serious and She says: "I am the Mother of The Redeemer - Mother of God". From the seriousness with which She says this it is certain that this is importantly related to FAITH. Is it then so difficult to Believe in the great power of The Mother of God? 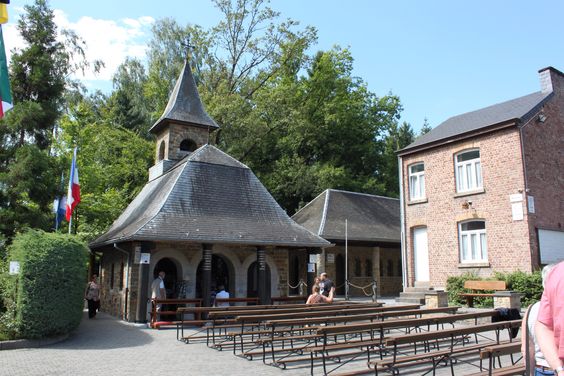 Eighth and last apparition - Thursday the 2nd of March:

Ten days later Mariette Beco saw the Blessed Virgin Mary for the last time in Banneux. Torrential rain had been pouring down since three p.m. Mariet Beco went out, it was 7. pm. She was reciting her third rosary when the rain suddenly stopped. She remained silent, stretched out her arms, got up, took a step forward and knelt down. At home, Mariette Beco revealed the message entrusted to her by Mary. "I am the Mother of the Saviour, Mother of God, Pray much. Adieu."

Banneux was investigated from 1935 until 1937 by an Episcopal commission, after which the evidence collected was submitted to Rome. Meanwhile growing numbers of pilgrims came to the shrine, and in May 1942 Bishop Kerkhofs of Liege approved the cult of the Virgin of the Poor. In 1947 the apparitions in Banneux themselves received preliminary approval, with this becoming definite in 1949. Like the children at Beauraing, Mariette Beco married and had a family, being, like them, content to remain in the background.

Mariette Beco lived until 2 December 2011, dying at the age of 90. Three years earlier, at a ceremony marking the 75th anniversary of the visions, she released a statement saying: “I was no more than a postman who delivers the mail. Once this has been done, the postman is of no importance any more.” 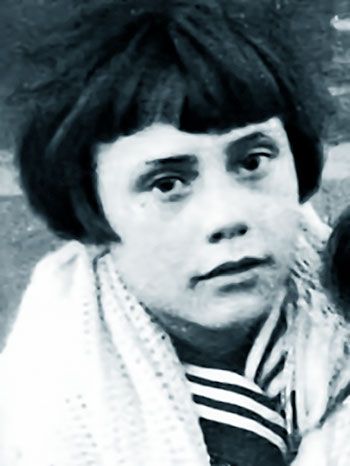 "These apparitions of the Blessed Virgin Mary in Banneux are fully approved bij the Holy See: 1949"

Visitor Information for the Shrine of Our Lady of Banneux

By car: From Brussels, take E40 east to Liège. Continue on E40 in the direction of Aachen-Verviers. At Battice (after Exit 37), take E42 in the direction of Verviers, exiting at Ensival-Verviers (exit 5) and following the signs 8 miles to Banneux. By train: There is no train station in Banneux. The nearest stations are in Liège, Verviers, and Pepinster, all of which have regular bus service to Banneux. When to go: May 1 is the opening day of the pilgrimage season, which lasts through October. A major pilgrimage to Banneux takes place on August 15, the Feast of the Assumption.

Leo and Joanna by the Source in Banneux 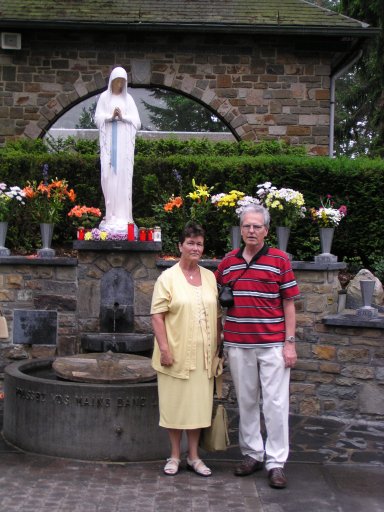 The next time Our Blessed Mother did not appear,
but She sent Her tears to people in Syracuse Sicily in 1953