Saint Augustine was born on November 13, 354, in Tagaste, North Africa, some forty miles from the port city of Hippo, in the department of Constantine. His father, Patricius was a burgess of this town, and was still a pagan at the time of his son's birth. His mother, Saint Monica, was not only a Christian, but a woman of the most elevated, tender, and devoted piety, whose patient prayerfulness for both her husband and son.

As a youth Augustine lived a hedonistic lifestyle for a time, and in Carthage, he developed a relationship with a young woman who would be his concubine for over fifteen years, with whom he had a son. Saint Monica sent Augustine to a bishop to be convinced of his errors. The bishop, however, was unable to prevail, and he advised Saint Monica simply to continue to pray for her son. He told her: "It is impossible that the son of so many tears should perish". Monica then prayed for the conversion of her son, Augustine.

In Milan Monica found Saint Ambrose and through him she ultimately had the joy of seeing Augustine yield, after seventeen years of resistance. Mother and son spent six months of true peace at Cassiacum, after which time Augustine was baptized in the church of Saint John the Baptist at Milan, at the age of 28, on Easter Eve in 387.

In 391, Augustine was reluctantly ordained as a priest by the congregation of Hippo Regius, a not uncommon practice in Northern Africa, and in 395 he was made Bishop. Augustine died on August 28, 430, during the siege of Hippo by the Vandals. He is said to have encouraged its citizens to resist the attacks, primarily on the grounds that the Vandals adhered to the Arian heresy. His most famous works are Confessions, De Trinitate and De Civitate Dei. His notions of God's grace, free will and Original Sin had a great influence on Christian theology.

Saint Augustine died in the late fourth century. At that time, saints were proclaimed by common acclamation of the Catholic people, as ratified by their local bishop. Rome did not have a big part to play in beatifications or canonizations until the eleventh century. I don't know if Pope Saint Siricius (384-399) beatified or canonized Saint Monica. Later popes certainly accepted her canonization as a fact. In the early centuries, canonization was much more informal and a kind of general, grassroots recognition by the Catholic population that a person was holy and a model for Christian living.

Patron of theologians, printers and brewers

A Prayer of Saint Augustine 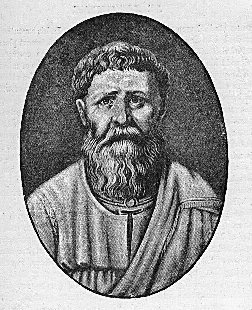 Late have I loved you, O Beauty, so ancient and so new, late have I loved you!
And behold, you were within me and I was outside, and there I sought for you, and in my deformity I rushed headlong into the well-formed things that you have made.
You were with me, and I was not with you. Those outer beauties held me far from you, yet if they had not been in you, they would not have existed at all.
You called, and cried out to me and broke open my deafness; you shone forth upon me and you scattered my blindness.
You breathed fragrance, and I drew in my breath and I now pant for you.
I tasted, and I hunger and thirst; you touched me, and I burned for your peace.
Amen.

Lord,
my God,
my one hope,
hear me,
that I be not unwilling, through weariness,
to seek you,
but that I may always ardently seek your face.

Give me the strength to seek,
since you have made me in order to find you,
and have given me the hope of finding you more and more.

My strength and my weakness are known to you:
preserve the one
and heal the other.

May I remember you,
understand you,
love you.

Increase these things in me
until you have wholly renewed me.