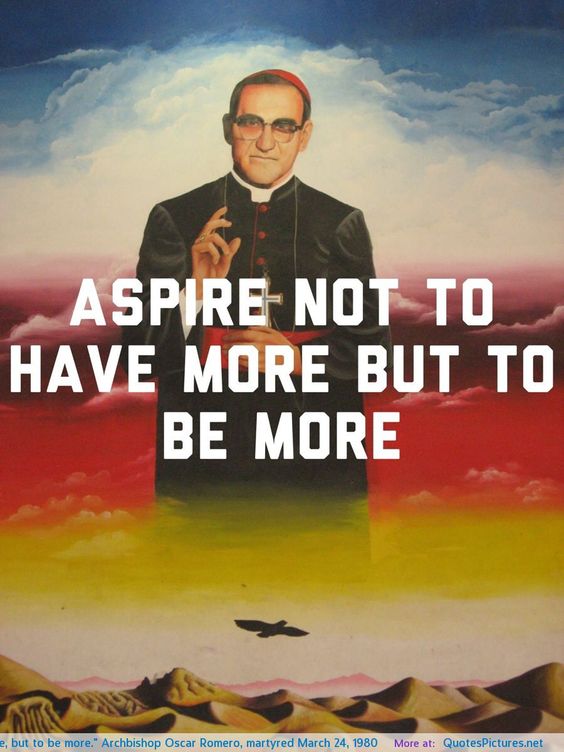 Oscar Arnulfo Romero y Galdamez, archbishop of San Salvador, was born on August 15, 1917, in the town of Ciudad Barrios, in the department of San Miguel, in the mountains of El Salvador near the border with Honduras, where his father was a telegraph operator.

At first Oscar wanted to be a carpenter, but later he decided he was meant to be a priest. Oscar spent the first two and half decades of his ministerial career as a parish priest and diocesan secretary in San Miguel. In 1970 he became auxiliary bishop of San Salvador and served in that position until 1974 when the Vatican named him to the see of Santiago de María, a poor, rural diocese which included his boyhood hometown. In 1977 he returned to the capital to succeed San Salvador.

When Oscar was elected as archbishop of San Salvador in 1977, it was the wealthy elite who were pleased. Archbishop Romero was a conservative and pious man, unlikely to upset the status quo. But as he witnessed the persecution of the poor in the San Salvadoran church and ministered to their pain. He worked with and for them, taking their struggles as his own. Father Romero wrote and spoke passionately about the need for Christians to work for justice, and he frequently faced threats and danger from those opposed to his ideas.

He became a voice of challenge, crying out for justice in a war-torn country. He watched as the people of his church and many priests were assassinated by the government,, yet he called continually for conversion and repentance. He did not take up arms, he took up the Eucharist and asked everyone to follow the Prince of Peace. On March 12, 1977, just weeks after Romero became archbishop of San Salvador, his best friend and first priest, Rutilio Grande, was ambushed and killed along with two parishioners. Undeterred, Romero prayed publicly at length beside his friend’s remains, and then buried all three corpses without first securing government permission – a criminal offence. Next he did the unthinkable: he excommunicated the murderers. In a dramatic gesture he cancelled all services the following Sunday except for a single mass in front of the cathedral, conducted outdoors before 100.000 people. When he went to Rome to explain himself, the pope replied, “Coraggio – courage.”

He knew he was going to be killed and days before his murder he told a reporter: "You can tell the people that if they succeedin killing me, that I forgive and bless those who do it. Hopefully, they will realize they are wasting their time. A bishop will die, but the church of God, which is the people, will never perish." The eloquence of this prophet for God's justice and peace is a source of inspiration for all students and staff who long to cultivate a life of uncompromised integrity. Not long before he died, the Archbishop remarked: "I have frequently been threatened with death. I must say that, as a Christian, I do not believe in death but in the resurrection. If they kill me, I shall rise again in the Salvadoran people."

On Monday, March 24, 1980, at 6:25 p.m., after he had finished his sermon and begun the Offertory of his last Mass, a single shot rang out in the chapel of the hospital of Divine Providence. Romero was dead. He was killed during his homily by a gunman who fired one, well-placed bullet through his heart. It is believed that his assassins were members of Salvadoran "death squads".

This Archbishop and Martyr was a person whose total trust was in God - not in his position as archbishop, not in the wealth that he could have had as leader of the church. His trust was in God alone, so no matter what happened. His spirit is very alive in that nation. In the years following his death, he became truly incarnated in the lives, the sufferings and the hopes of the believing poor of El Salvador.

In El Salvador today, he is known among the poor as "Saint Romero", and by 1985 there were already reports of healing miracles attributed to him. In addition, his funeral turned into a massacre, as government forces opened fire on the crowd and bombed the area around the Cathedral square.

Oscar Romero has been beatified at a ceremony in El Salvador attended by huge crowds.
He was declared a martyr by Pope Francis on 3 February 2015, paving the way for his beatification on 23 May 2015.
At least 250,000 people have filled the streets of the capital San Salvador for the ceremony.

The canonization of Archbishop Oscar Romero took place by pope Francis I in Saint Peter’s Square on October 14, 2018.

A prayer by Archbishop Oscar Romero 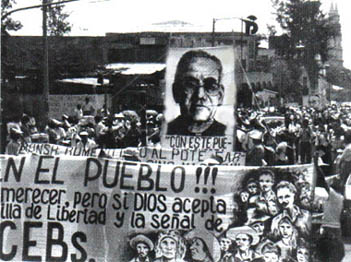 It helps, now and then, to step back
and take the long view.
The kingdom is not only beyond our efforts,
it is beyond our vision.

We accomplish in our lifetime only a tiny fraction of
the magnificent enterprise that is God's work.
Nothing we do is complete,
which is another way of saying
that the kingdom always lies beyond us.

No statement says all that could be said.
No prayer fully expresses our faith.
No confession brings perfection.
No pastoral visit brings wholeness.
No program accomplishes the church's mission.
No set of goals and objectives includes everything.

This is what we are about:
We plant seeds that one day will grow.
We water seeds already planted, knowing that they hold future promise.
We lay foundations that will need further development.
We provide yeast that produces effects beyond our capabilities.

We cannot do everything
and there is a sense of liberation in realizing that.
This enables us to do something,
and to do it very well.
It may be incomplete, but it is a beginning, a step along the way,
an opportunity for God's grace to enter and do the rest.

We may never see the end results,
but that is the difference between the master builder and the worker.
We are workers, not master builders,
ministers, not messiahs.
We are prophets of a future not our own
Amen