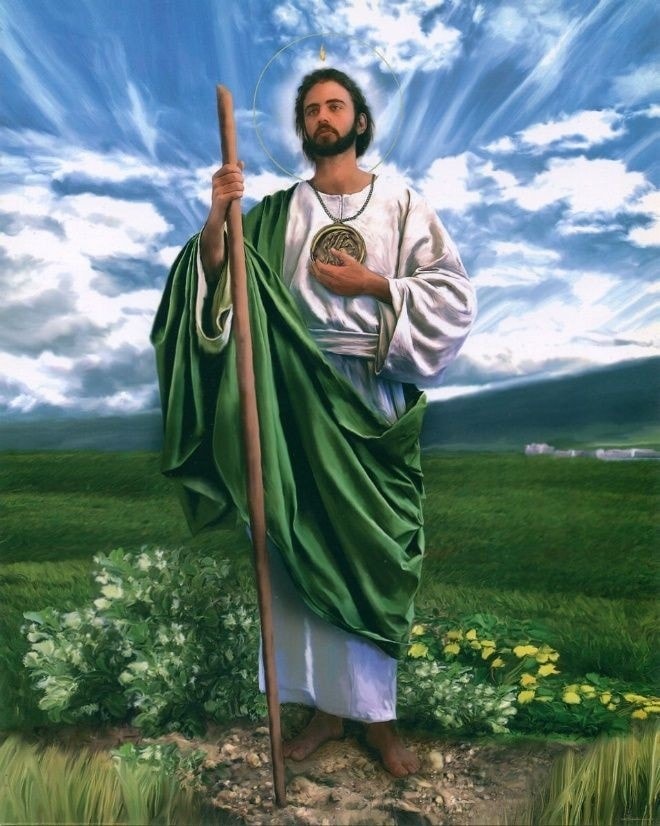 The Apostle Jude, in his own Epistle, gives himself the title: "brother of James", which is the meaning of the name Thaddeus (or Lebbeus) by which Jude was also known. Probably no saint, after the Blessed Mother, has drawn such enthusiastic followers down through the centuries as St. Jude Thaddeus. He was one of the chosen 12 Apostles; his brother was James the Less. Not too much is actually recorded about his life: it seems his big popularity began after his death.

Through history, legend and tradition, however, we can construct some detailsconcerning this powerful intercessor and close friend of the Divine Master. St. Jude comes from the line of David and is a cousin of Jesus Christ. The Jewish people, proud of their lineage, kept exact records of their ancestors, and we see that St. Jude's father, Cleophas, was the brother of St. Joseph. St. Jude's mother, Mary of Cleophas, was a cousin of the Blessed Virgin Mary: their mothers were sisters.

In the Gospel, Mary of Cleophas is identified as the "sister" who has the courage to stand beneath the Cross of Christ along with the Virgin Mary and St. John. In the Hebrew language, the word "sister" was often used to include the cousins.

The Apostle Saint Jude Thaddeus is "The Miraculous Saint," the Catholic Patron Saint of "lost causes" and "cases despaired of."When all other avenues are closed, he is the one to call upon, and his help often comes at the last moment. 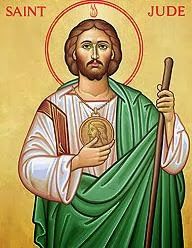 O most holy apostle, St. Jude, faithful servant and friend of Jesus -- People honor and invoke you universally, as the patron of hopeless cases, of things almost despaired of. Pray for me, for I am so helpless and alone. Please help to bring me visible and speedy assistance. Come to my assistance in this great need that I may receive the consolation and help of heaven in all my necessities, tribulations, and sufferings, particularly (state your request) and that I may praise God with you always. I promise, O blessed St. Jude, to be ever mindful of this great favor, to always honor you as my special and powerful patron, and to gratefully encourage devotion to you by publishing this request.
Amen.