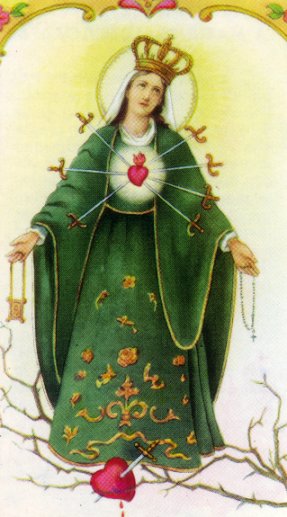 The Spanish magazine "Maria Mensajera" (Edition of the Editorial Circulo in Zaragoza) gave details of a new series of apparitions and messages of the Blessed Virgin Mary in its November and December 1971 issues. From the account, written by Mr. L.M.Matute, we derive the following particulars:

The apparitions take place inside, but mostly outside, a farm located in the Alto de Umbe reforestation project, near the village of Lauquiniz in the province of Bilbao (Northern Spain). The seeress is a woman, Felisa Sistiaga, married and the mother of four grown children. Until recently, the family lived on the farm, but it has since been vacated because the Virgin indicated that he had other intentions with this building.

For the very first apparition, we have to go back to the year 1941. On the evening of March 25 of that year, Felisa is sitting in the kitchen waiting for her husband to come home. She looks outside and suddenly sees a brilliant light descending. She does not know where that light comes from and at first she does not dare to look at it. Later she notices that in the glare of light there is a somewhat darker figure, surrounded by a bright cloud.

When after some time the light shine has disappeared, she hears three knocks on the door shortly afterwards. She opens the door, but sees no one outside. The knocking repeats itself, but again she sees nothing. She now leaves the door half open, in case it is her husband who comes home. Shocked by the unexpected events, she sits down on a chair in the kitchen. At that moment she sees the Blessed Virgin in a corner of the room. This is in a kneeling position on a chair and on either side of Her is a candlestick with a burning candle. She has a book before Her, from which She apparently prays. The apparition is dressed in black and a black veil hangs over Her shoulders. In the middle of Her chest a Heart is visible, which is surrounded by swords. Her oval-shaped face is clearly visible and has strikingly amiable features. She appears to be 18-20 years old and smiling. Her hands are just visible under the wide folds of Her cloak and on Her wrist She wears a full rosary (of 15 tens) of brown color. Above Her head is a crown of very shining stars.

The seeress begins to cry and asks the apparition to take her with Him. However, it does not answer and disappears after a short time. A little later, Felisa's husband comes home and she tells what just happened to her. They agree not to speak to anyone about what has happened. Years then pass in which nothing happens; only once did Felisa see an Angel appearing above the branches of an apple tree, close to home, but who did not speak to her.

Only from 1968 do the special events continue. One day in that year, Felisa hears bells ringing and sounds that seem to come from a religious ceremony. She hears praying people attending a Holy Mass and also the turning of pages in a church book.

The following year - 1969 - the Blessed Virgin Mary appeared to Felisa again, for the first time on March 28, when she was walking near home with a little granddaughter. Felisa asks Her in the regional dialect what She wants from Her, but receives no answer and after a short time the apparition disappears again.

On May 23, the Blessed Virgin addresses Felisa for the first time with these words:

I love you dearly and desire your salvation,
to unite you around God.
I come for My children;
I come with the message of peace to the world.

The Blessed Virgin requires a chapel in the farm, on the place where she appeared. An Angel asks Felisa to place a white wooden cross at the well where Mary has appeared to her several times. On August 9, 1969, an Angel appears to her, wearing a bag around his neck. From it he takes two candles that started to burn by themselves. He also took out a piece of black cloth, saying that the mantle of the statue of the Virgin should be made of that kind of cloth. On that occasion the Angel had sent for Felisa to bring witnesses who, he had previously declared, would also see the light. So there was a group of people present when, at ten o'clock in the evening, the Angel appeared at the well. Felisa prayed away from the other people. When the Angel appeared to her and the other people were praying, they suddenly saw a bright light, illuminating a large part of the undergrowth around the well. Impressed by the event, they then began to sing, and then it was as if great hosts of angels were singing in unison with them.

In December 1969, during an apparition at the well, the Angel clearly left the footprints of his feet. They remained visible for quite some time and withstood the influence of all kinds of weather conditions. Later, however, they were blotted out with a stick by an unbeliever.

On September 26 of the following year (1970), at half past five in the afternoon, the Blessed Virgin appeared to Felisa and asked her: “Are you ready to receive the Blood of My Son? When the seeress answered in the affirmative, she offered to drink from a golden chalice which she carried with her. Those present saw the seeress's tongue after she had drunk of the blood from the chalice, and it was found that there were a few thick drops on the tongue, which were halfway between wine and blood and which were brilliant in color. The Blessed Virgin, during one of her apparitions, also asked for the seeress' rosary. Felisa held it up to the apparition and those present saw the rosary go up, disappear for a few moments and shortly afterwards saw it again, radiant. The rosary, which had black-painted beads and gold-plated links, was received back by the seeress with white beads and matte silver links. It also gave off a very pleasant scent. 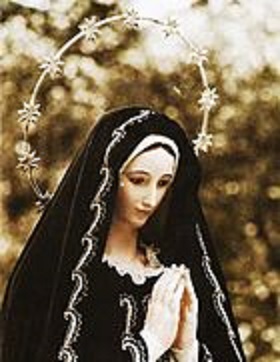 After these events, the Blessed Virgin returned to Felisa for seven consecutive days and asked her to receive the Holy Eucharist for peace in the world. This time those present saw on Felisa's tongue a white and luminous host, which remained visible there for a few moments. These mystical Communions seem to take place in reparation and to save souls. On such an occasion on January 3, 1971, the Blessed Virgin told her:

What I give you serves for the forgiveness of sinners and to raise the Kingdom of God from the agony of death.

Also in these apparitions, Mary calls people to come to the place of her apparitions and pray the rosary there as much as possible for the conversion of the world and to avoid chastisements. The following can be said about the messages which the Blessed Virgin entrusted to Felisa Sistiaga. Mary said to her:

Your mission consists in helping Me,
so that the others may know Me.
Pray for sinners and do penance.
Keep praying every day.
God knows why He chose you.
Go and proclaim that the kingdom of God is near.

These words are addressed by the Blessed Virgin not only to the seeress and her family, but also apply to other laity, whom the Blessed Virgin calls “Her apostles among men” and whom She said will be , who will follow God and save the world!

Furthermore, in this place of grace, the Blessed Virgin said:

I don't come just for you; I come for all mankind.
I'm issuing final warnings.
In many places I have appeared,
but few people have faith.
The seers and I remain alone.
Little attention is paid to miracles.
In the places where I appear, the message lingers on My lips.

Since the vast majority of people practically reject the urgent appeals of the Blessed Virgin, one can understand Her complaints, which She here, appearing as the Mother of Sorrows, uttered.

I bear great sorrow and am very sad,
because of the lack of faith among the people.
Heaven's last attempt will be the miracle
for the conversion of sinners.
My Son and I wait,
whether humanity cares about Us.

Concerning the coming events, the Blessed Virgin said, among other things, this:

Before chastisement shall be by way of warning
the whole sky be lit up by a cross.
When that cross shatters, it brings forth an immense bright light,
which is so strong that the light of the sun: cannot be seen through it.
That takes four hours.
Thereupon a scorching wind will ravage the whole earth.
Many will die of fright,
but those who believe in God will suffer nothing.

As proof of the authenticity of her apparitions, the Blessed Virgin wanted to leave a sign. She announced this to the seeress with these words:

The first day I came to rescue you,
I first went down to the well.
This water remains blessed forever from today.
It will heal the sick and the healthy.
Let them wash their face and feet with it.

In almost all of Her later apparitions, the Blessed Virgin has pointed to this sign when one asked for proof of the authenticity of Her apparitions:

He who believes in Me will be healed at the well.
The water will continue to heal.

The first to be healed by the water from the well was Felisa's husband. He had been given up by the doctors years ago because he suffered from a kind of cancer that was, from a human point of view, incurable. At least five more people have since been cured.

It may be important for the future that the editors of the Maria Mensajera magazine received two sealed envelopes from Felisa. They may only be opened after two events described therein have taken place. Since this concerns future events, it was thought to be a good idea to announce this in advance, so that its significance will be all the greater later on. 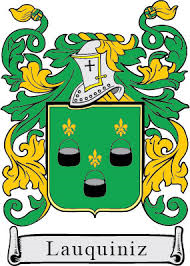