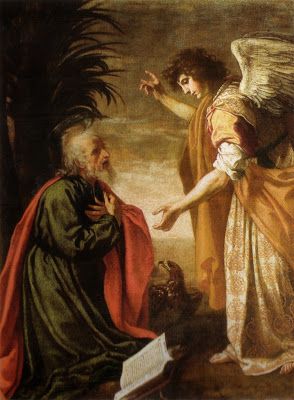 John was the son of a fisherman named Zebedee and the brother of James the Greater according to the New Testament. The name John means "given by God" or "God is gracious".

He was fixing the nets on the shore of Lake Tiberias when Jesus called him along with his brother.

Tradition has it that John was thrown into a bath of hot oil in Rome as a torture - which is why he is also called St. John in the Oil - which he survived. He was then exiled by the Roman Emperor Domitian to Patmos, where he wrote the Book of Revelation. He died, according to Christian tradition, in a very old age as the last of the twelve apostles of Jesus. Tradition has it that he is the only apostle to die of natural causes.